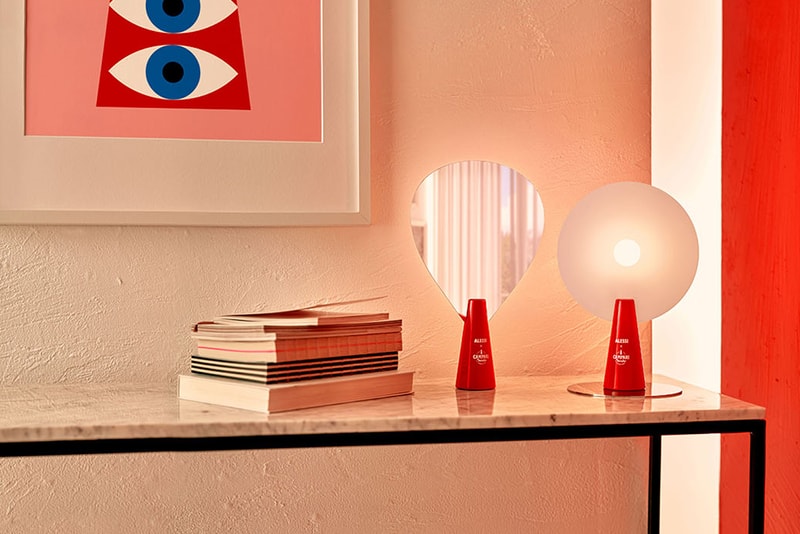 Alessi and Campari have revealed a collaborative homeware collection that takes its design cues from the iconic shape of the liqueur brand's glass bottle. Made up of two pieces, the "Cirifletto" mirror and the "Senzabuio" lamp, the new designs have been created by Milan-based industrial designer Giulio Iacchetti.

Both pieces feel somewhat nostalgic, given that their inspiration has come from the Campari Soda bottle, originally designed by Fortunato Depero in the 1930s. Iacchetti aimed to replicate the futurist style of Depero through the shapes and forms, while also modernising and simplifying to create an object relevant to a present-day audience.

The Cirifletto mirror has been crafted from stainless steel. Its base is formed from a conical, red-coloured foot complete with the Alessi and Campari branding. The mirror is slotted into the base to create a seamless finish. "The designer takes the unmistakable silhouette [of the bottle] to make it the foot of this table mirror, taking us back to the 20th century, through the linear stylisations typical of 1970s design," added Alessi. The Senzabuio Lamp features a disc-shaped shade that diffuses a soft glow emitted from the bulb. Its base is also disc-shaped, while – similarly to the Cirifletto mirror – its body takes its design cues from the shape of the Campari Soda bottle.

Both the Cirifletto mirror and Senzabuio lamp were launched at Alessi's Via Manzoni store during this year's Milan Design Week. Further down the road, the brand held an exhibition tracking its 100-year history, at which a new collection by the late Virgil Abloh was debuted.