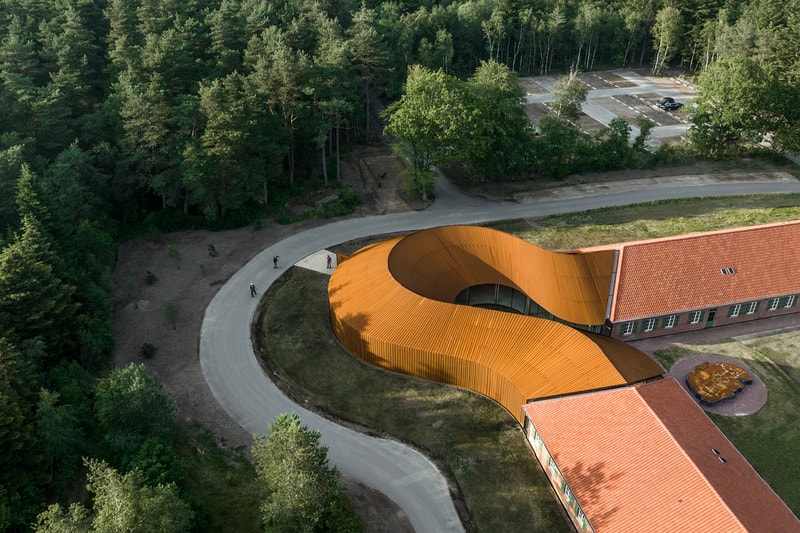 Bjarke Ingels Group (BIG) has completed its building for the Refugee Museum in Denmark, using Corten steel to create a curving structure that blends into its former surroundings. Set on the site of Denmark's largest World War II refugee camp, the "Flugt" museum shares stories of displaced people around the world – both past and present.

The project team worked to adapt some of the camp's remaining structures, namely a hospital building that had been made from red brick. Leftover from its previous layout was two long buildings, which BIG has connected via a softly curving corridor, that has been clad in Coren steel.

Inside, the architects have employed a floor-to-ceiling curved glass wall, which looks out onto the courtyard and surrounding forest in which the refugee camp was once situated. In the north wing, gallery spaces are laid out in accordance with the building's original flow, while in the south wing, the conference room, smaller exhibition spaces, cafe, and back-of-house functions are located. Throughout the space, walls are painted white, and yellow bricks have been used across the museum's floors.

"The Refugee Museum of Denmark explores an important part of our history and a theme that is more relevant than ever, with millions of refugees currently displaced from their homes. We have designed an architectural framework that connects the past with the present – with a new building directly shaped by its relationship to the historic hospital buildings of the WWII refugee camp.

We went into this project with all our heart to address one of the world's greatest challenges – how we welcome and care for our fellow world citizens when they are forced to flee."

The Refugee Museum of Denmark is now open to visitors and is located in Oksbøl – a town in southwestern Jutland, in the Region of Southern Denmark.

Elsewhere in architecture, London-based studio Freehaus has taken a 1960s office building in Southwark and transformed it into a new space for The Africa Centre.