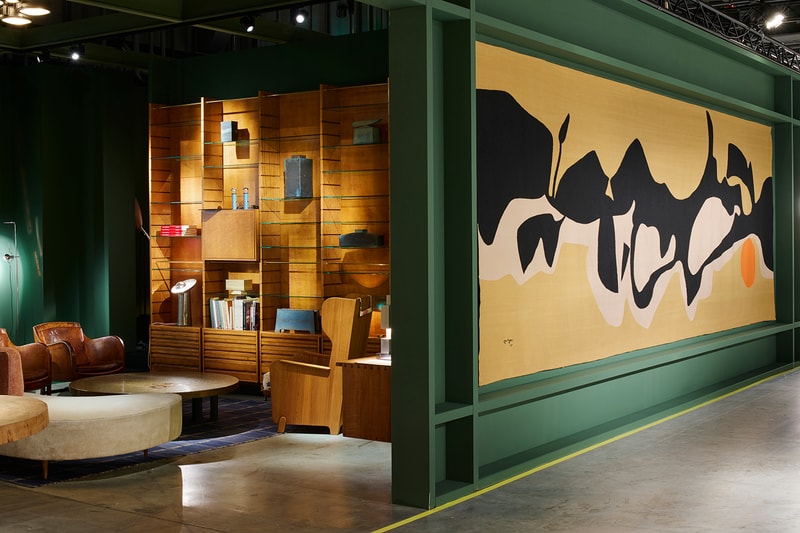 Design Miami/Basel has officially opened at the city's 'Messe Basel' location, bringing with it a packed roster of design galleries and installations. Inside, visitors will find 34 of the world's leading galleries, a series of 18 specifically curated exhibitions collectively titled 'Curios', and a corresponding talks programme, which is taking place both in-person and online.

Design Miami/Basel coincides with the annual Art Basel fair, and is the precursor to the American event later in the year. For the 2022 edition, design curator Maria Cristina Didiero has been appointed Curatorial Director and has chosen to theme sections of the show around the concept of "The Golden Age" in a bid to give emphasis to the past.

On this theme, she said:

"Even during the hardest of struggles, as a society, we should always focus and strive to be better. We must remember that challenges have always driven humanity forward. Human beings have come up with answers to the world’s most pressing questions, often during moments in which the very roots of our lives are being tested by external forces, over which it seems we have no control.

We will question these ideas - exploring how the perseverance, flexibility, resilience and adaptability of humanity has led us to innovation and hope. We must continue this now more than ever".

Some galleries have responded to this theme through the presentation of iconic 20th-century pieces, such as the Paris gallery Matthieu Richard, which is presenting a rare armchair by Mathieu Matégot named AM56, originally presented at the Salon des Arts Ménagers in 1956. Elsewhere, Galerie Eric Philippe is focusing on American modernism and Finnish design, with works by the likes of Antti Nurmesniemi and Paavo Tynell.

A contemporary highlight will be taking place over at Friedman Benda's booth, in the form of the first solo show at Design/Miami Basel from US designer Misha Kahn. Pieces from the designer's existing series will be presented alongside two new works: "Crater" mirror and "Billionaire Space Race" coffee table – both of which explore the idea of intergalactic tourism. "For me, [Basel] is an opportunity at the best platform to propose a shift for objects - one that exchanges rigidity for a looser, more exploratory and emotionally complex material landscape."

A poignant contribution comes from Antwerp gallery Faina, which was founded in 2014 by Ukrainian-born designer Victoria Yakusha. Her show "Stepping on Ukrainian Soil" embodies the mission of her gallery – to showcase the incredible craft heritage from her homeland through a contemporary lens. Its focal point is a handwoven, 2.5-meter tapestry, titled Zemlia – Ukrainian for “earth” – and around it are pieces of furniture based on fictitious animals.

"Wherever I am, I feel pulled towards Ukrainian soil," she says. "I feel a need for physical contact with it, and when you have this connection to your earth when you feel your roots in her, there’s nothing more powerful."

Design Miami/Basel runs until June 19, at Messe Basel. Visitors can also explore the fair virtually via the event website.

In other design news, Danish furniture brand HAY is set to become the subject of a new book published by Phaidon, which will look at the brand’s beginnings and track its successes through to the present day.