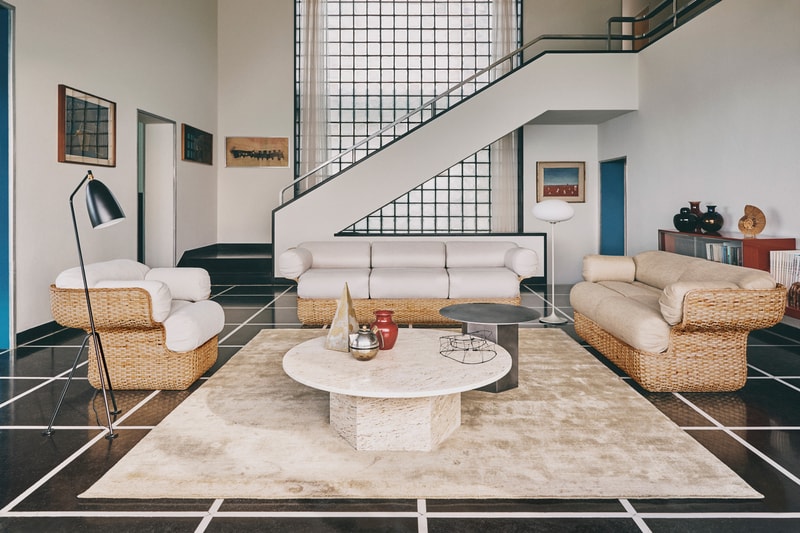 Danish brand Gubi has reissued a collection designed by Italian designer Joe Colombo, which sees the shapes of sofas and chairs formed through basket weaving. Aptly named "Baskets" the collection was designed by Colombo before his death in 1971 and was first produced in the late 1960s by a specialist rattan furniture manufacturer.

But after production was halted on the designs, Gubi stepped in to reintroduce it to market and has launched the full, three-piece collection during this year's 3daysofdesign festival currently taking place in Copenhagen. A few changes have been made to the design in order to improve its environmental credentials. For example, the fibreglass inner shell used by Colombo has been swapped for a more eco-friendly steel frame. Its rattan structure, however, stays true to tradition and has been painstakingly crafted from interlaced strips.

The frame is fitted with rounded cushions on the seat and back, which create a plush, snug seating area. These can be upholstered in a number of fabrics, rendering them suitable for either indoor or outdoor settings.

Despite his relatively short career, Colombo worked alongside some of the biggest names in design and is the mind behind some of today's most sought-after furniture pieces. It was during his time running the family business of electrical cable production that he began to experiment with techniques and production methods that eventually led to him opening his own design studio in 1961. Many people will know Colombo for his plastic works, namely the Boby storage unit and Universale stacking side chairs – so to see a collection made from a material as tactile as rattan may be a surprise.

"Rattan is not a material commonly associated with his work," said Marie Kristine Schmidt, Chief Marketing Officer at GUBI. "It's wonderful to be able to showcase the diversity of the output he achieved."

Elsewhere at 3daysofdesign, Danish brand Muuto has opened the doors to its first-ever retail space in its hometown of Copenhagen, while &Tradition has gathered five international designers to create new interpretations of the archetypal table.