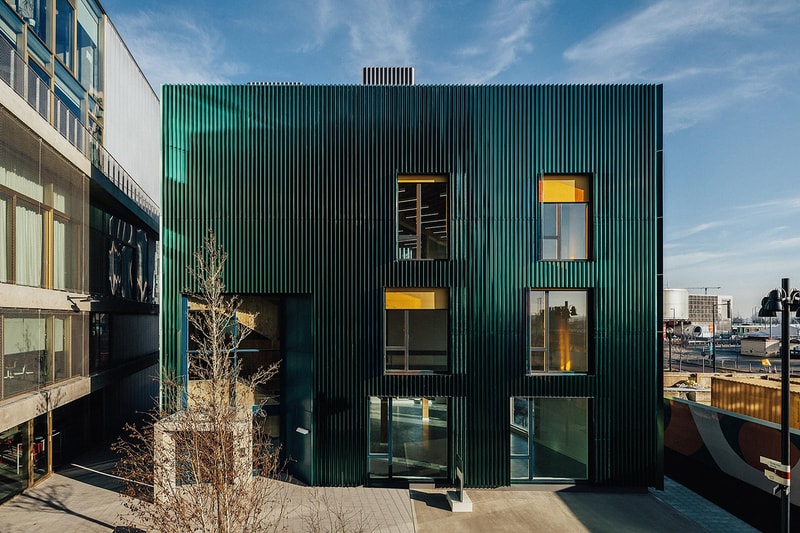 A new addition has joined the cluster of experimental buildings in London's Design District, complete with a facade clad in colour-shifting shades and a structure made from cross-laminated timber. Designed by local practice Mole Architects, the "D2" building forms part of the area's wider experimental architecture landscape. It is the second of the studio's structures in the area, which also features buildings by the likes of Selgas Cano and 6A Architects.

D2 takes its visual cues from the history of Greenwich Peninsula – specifically when the area was home to Europe's largest gasworks. Its petrol-toned cladding makes the building a clear standout amongst the architecture nearby, despite being one of the site's smallest. Not only striking from the outside, but its interior also reveals the innovative building method used to construct its core. In order to radically reduce carbon footprint, the architects opted for cross-laminated timber in place of concrete – which uses half the energy of concrete structures to build, and also acts as carbon stores that lock CO2 into the fabric of the building.

"Making timber buildings is a gift to those that live or work in them; it seems that humans have a natural affinity with timber and the warmth that it conveys. We’ve left quite a lot of timber exposed, as well as each space having fantastic large openings to the best views.

The reflected light from the dichroic fins into the interiors was actually an unintended surprise, but we love it."

The building's primary focus is a creative co-working space, with tenants already setting up studios and offices. Unlike many similar spaces across the city, D2 adapts to a variety of creative needs: from expansive photography studios to maker workshops.

In other design news, check out this giant terrarium-like structure that has been unveiled in the English countryside, designed by Heatherwick Studio.