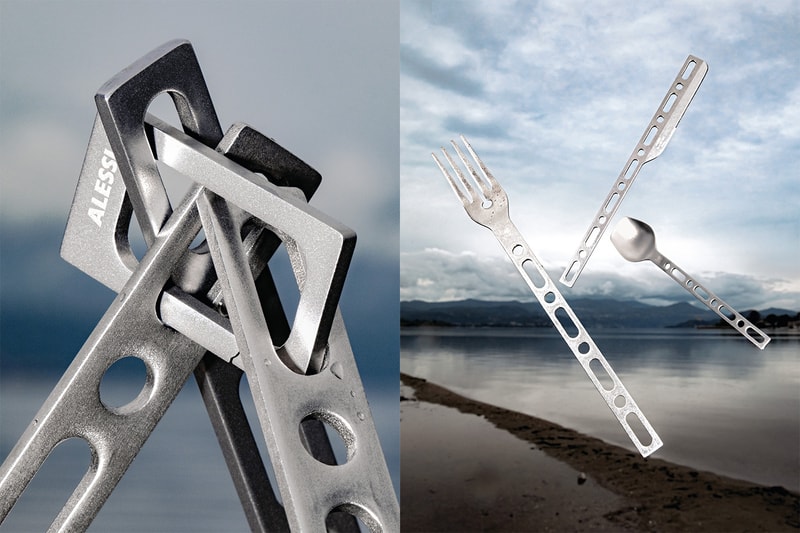 Italian design brand Alessi has revealed a collection of cutlery designed by Virgil Abloh and his London-based studio Alaska Alaska, which sees a knife, fork and spoon fastened together with a carabiner. Titled “Occasional Object”, the tableware intends to offer a new perspective on the tools we eat with.

The collaboration between Abloh and Alessi came about just over a year ago, when the late designer reached out to Alberto Alessi to suggest they joined forces.

“Virgil thought of Alessi as the best in class, not only in terms of its design history but also because of the calibre of the artists and designers it had worked with in the past. This provided Virgil with the perfect context to actualise this project amongst great company,” said Tawanda Chiweshe, the creative director of Alaska Alaska.

Made in Italy, each piece features cut out shapes on its body. The spoon’s edge is squared off, while the fork’s spokes are split into two sets of two. The Occasional Object collection bears a resemblance to cutlery more typically found in camping packs or even toolboxes, rather than upon restaurant tables – but this was something that, according to Alessi, Abloh intentionally wanted to represent.

“I found that Virgil had a completely different way to look at things and objects, so when he looked at the world of Alessi, it was through the eyes of one who loved the idea of a mechanical workshop. I remember the first reference he showed me was a wrench, very far from what we habitually think of design – it was almost brutalist.

Alas, we had very little time to make our collection with Virgil, but I am so glad we did.”

The collection will be presented within the wider 100-001 exhibition – the 100 represents the past 100 years of Alessia’s history, while the 001 refers to the first project of its next 100 years – Abloh’s. For the show, the company has commissioned Michele De Lucchi’s multidisciplinary studio AMDL CIRCLE to create a series of installations that tracks the company’s output.

“Alessi today is the result of the collaborations we have done with so many design minds, like Sottsass, Starck, Mendini and Castiglioni. Each of them has left an important mark and contributed to what the company has become. Virgil Abloom is the latest name to add to that list and I cannot think of anyone better to express our desire to remain relevant and contemporary,” Alberto added.

Alessi 100-001 takes place during this year’s Salone del Mobile fair, which kicks off in Milan today and runs until June 12. Another collection by Abloh is being presented by fellow Italian brand Cassina, for which he designed a series of modular furniture pieces described as “building blocks”.

Elsewhere, check out our guide to the must-see installations and exhibitions taking place during the festival.