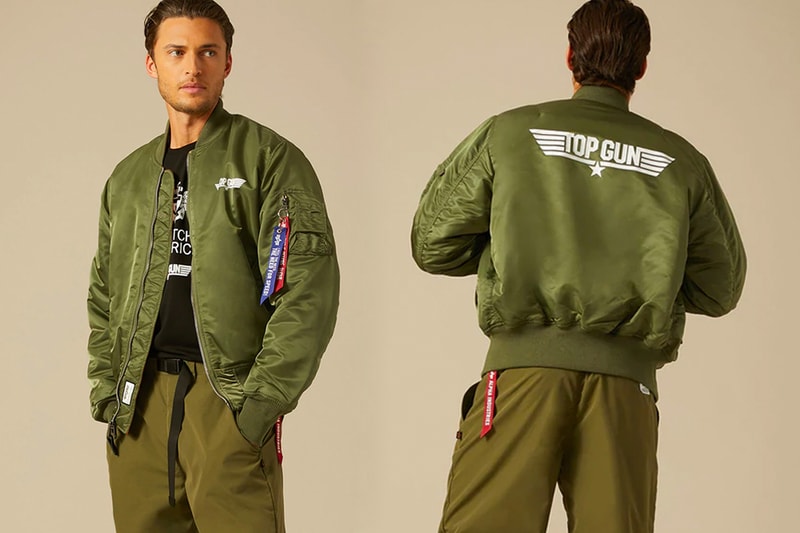 Following a collaboration with Patta, Alpha Industries now celebrates the 36th anniversary of the original Top Gun film and the arrival of its long-awaited Top Gun: Maverick sequel with a limited-edited capsule of bombers and tees. Highlighted in the collection is Alpha Industries' signature MA-1 Bomber featuring red and blue flight tags on the shoulder pocket and "TOP GUN" title graphics across the left chest and back.

An alternative option includes a CWU 45/P bomber jacket that more closely resembles the styles worn by Tom Cruise in the original film featuring fold-down collars and an array of patches around the chest and sleeves. Blue flags on the shoulder pocket display the text " I feel the need... The need for speed!" and a removable "Top Gun" patch is incorporated on the chest. Additional details include two exterior flap pockets and a hidden welt pocket.

Rounding out the assortment are three T-Shirt designs highlighting the elite U.S. Fighter Weapons School known in short as TOPGUN and the brazen Lt. Tom "Iceman" Kazansky character featured in the original film.

The TOP GUN x Alpha Collection is now available exclusively on the Alpha Industries website. Prices range from $44 USD for the tees to $335 USD for the bombers.

In other news, the Balenciaga x adidas collection is now available.