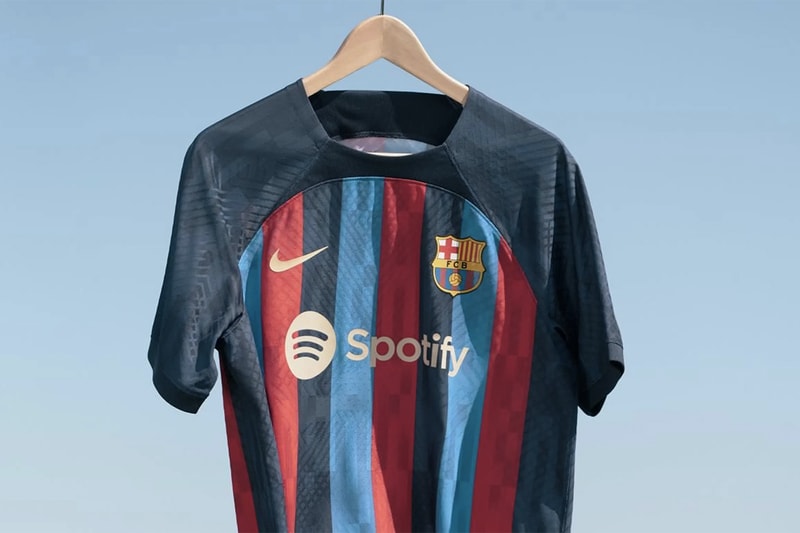 Spanish club FC Barcelona has unveiled its home shirt for the 2022/23 season, taking inspiration from the 1992 Olympics and the 30th anniversary of the transformational games. That reference is celebrated through the kit's "The Flame Lives On" tagline, as well as a number of design touches across the jersey.

The Nike-produced 2022/23 jersey marks a break from previous Barcelona kits. The signature blue and red stripes -- which give the club its Blaugrana nickname -- now feature two different shades of blue. The navy and lighter blue are chosen to represent the creation of new spaces in the city and new connections to the sea for the '92 games. This darker navy tone also appears on the collar, sleeves, shorts and socks, again showing a departure from previous Barcelona kits.

Another key feature of the design is the inclusion of Spotify on the front of the jersey, coming after the audio streaming service signed a huge sponsorship deal with Barcelona earlier this year. The jersey is finished with the logo of the United Nations High Commissioner for Refugees on the reverse.

The new kit is available now via the FC Barcelona web store, and fans who purchase the kit before June 30 will be entered into a draw to win a lifetime supply of shirts.

For more from Nike, take a look at its new "Prep School"-inspired Air Max 95.