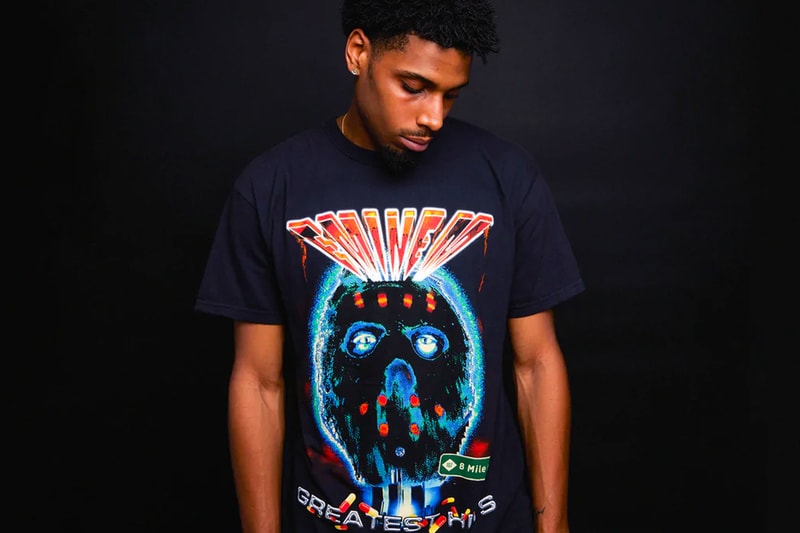 Not long after confirming his next project, his greatest hits album Curtain Call 2, Eminem has also dropped a whole new merch collection to gear up for the release.

The unveiled merch for his second greatest hits collection is arcade-themed pieces to hold fans over for the release of the album next month. Marshall took to Twitter to make the announcement of the drop by posting two photos of the t-shirts accompanied by the caption, "Does this look like an arcade? Tryna play games? See this saw blade? #CurtainCall2 merch, vinyl, and bundles now avail for pre-order! Hit the site."

All in all, the merch capsule collection sees two graphic tees, one seemingly featuring the album cover and another which pays homage to 8 Mile. The collection also includes CD box sets, cassette tapes and vinyl, either autographed or not. Curtain Call 2 is set to feature some of Eminem's greatest hits from Relapse and beyond, as well as side-projects and guest appearances. The first Curtain Call: The Hits was released in 2005 and featured some of his best hits including, "The Way I Am," "My Name Is," "Guilty Conscience" and "Without Me." The original album is still one of today's best-selling albums in the history of the Billboard 200.

Curtain Call 2 is expected to arrive on Augut 5. Check out the link for the merch online, now available for pre-order andn shipping before August 8.

In case you missed it, H&M has launched a Stranger Things-inspired capsule collection.