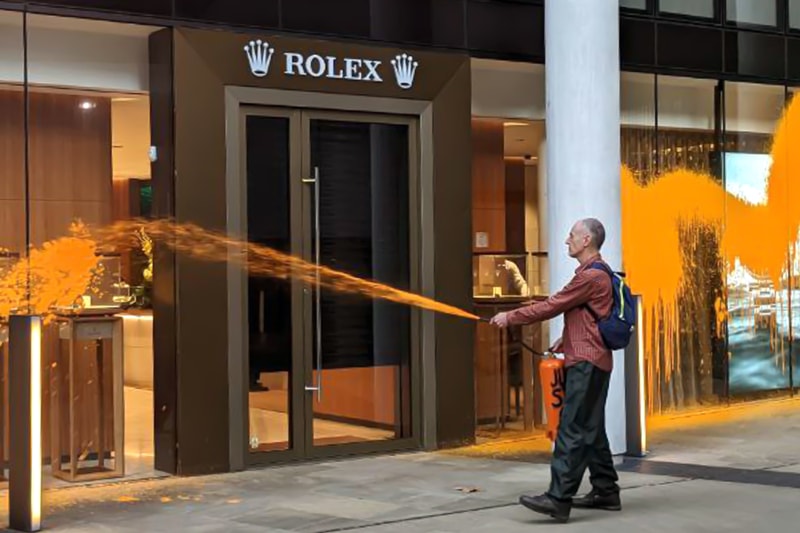 Following several incidents including a highly-publicized disturbance in which a man glued his head to the glass of Johannes Vermeer's iconic Girl with a Pearl Earring painting while another poured on tomato soup, the Just Stop Oil coalition, which aims to halt new fossil fuel licensing and production, now vandalizes a Rolex store in London

A video shows two protestors spraying orange paint across the store's glass exteriors using fire extinguishers. The use of paint echoes similar incidents at Aston Martin, Bugatti, Bentley, and Ferrari showrooms as well as the luxury department store Harrods. It's reported that 7,000 police officer shifts have been allocated to deal with the recent protest activity.

"There's no point in having jewel-encrusted watches when they're destined to be lost in floods and climate change is happening now. An energy crisis is happening now," says Jennifer Kowalsaki, an environmental scientist from Glasgow who was handcuffed at the scene.

Watch the situation unfold below.

⌚️ At 8:30am today, two Just Stop Oil supporters sprayed orange paint from a fire extinguisher over the premises of @ROLEX in Knightsbridge, demanding that the government halts all new oil and gas consents and licences. #FreeLouis pic.twitter.com/iBoNlQwTmc

“There's no point in having jewel-encrusted watches when they're destined to be lost in floods and climate change is happening now. An energy crisis is happening now."#FreeJosh #JustStopOil #A22Network pic.twitter.com/bByxRarK5H

? Statement read at caking of the King:

In other news, Jake Paul defeats Anderson Silva with a unanimous decision in an eight-round fight.