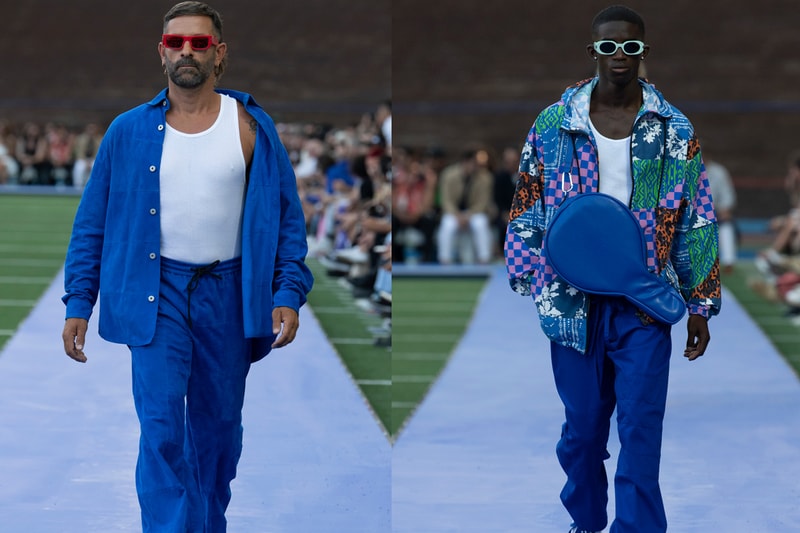 Amidst the ongoing pandemic and a rocky economy, it’s no surprise that many creatives and fashion designers have either closed-up shops or re-directed their business priorities. Yet, for Marcelo Burlon and his eponymous County of Milan brand, the show has continued to go on and is now celebrating its 10th anniversary for Spring/Summer 2023.

With a beginning in the fashion scene that dates back to the early ‘90s, Burlon has managed to stay afloat while continuing to present his vision of the world to fans and consumers – morphing and inventing new design ideas that reflect his world. The collection Burlon presented during Milan men’s week featured grated denim, frayed boxy crops, batiked and tie-dyed jackets, two-tone raglan sleeved shirts and oversized trousers.

Mixed pattern-print ponchos, intricate logo sets and animal prints also comprised the seismic collection, and there was also the reunion of Alpha Industries and Kappa collaborating with Burlon for the SS23 season. AI bomber jackets along with Kappa logo-laden tops and jerseys came in colorways of blue, black, grey and orange.

Additionally, Burlon has always heralded inclusivity and diversity, and his 10th-anniversary show proved that with a refreshing range of models including multiple ethnicities of youthful and senior men and women – and kids – that walked the entire length of a football field runway at Milan’s Velodromo Vigorelli stadium – wearing a mix of customized skate sneakers and leather boots. The show opened with a child model that appeared to be a younger version of Burlon, seemingly symbolizing the designer's journey towards the industry – with the designer making an appearance on the runway halfway through the show.

Reflecting on his career and the show’s major milestone, Burlon said: “It’s been a long journey, and it’s not just about a singular collection. It’s about the music, the moment, and my friends that have been with me since the beginning. My casting is always super special because we always try to reflect the world and give a voice to all those people that society is somehow not ready for.”

“Kappa is back, Alpha is back, and we have more coming up with huge collaborations that I cannot tell yet because it’s too early. But we have some really amazing things coming up,” Burlon added.

And making his debut as a model in the 10th-anniversary show, rising music star Lil Mosey chimed in – speaking exclusively to HYPEBEAST – saying: “I met Marcelo two years ago when I was in Florence and came to Milan to work on one of my shows with Sfera Ebbasta. When Marcelo was telling me about the big anniversary, he told me to pull up and he cast me in the show.”

“This was my first time walking in a fashion show, but I was locked in just as if I was doing a performance. When it comes to my personal style, I like to wear designer hoodies and sneakers, so with my look for the show, he went crazy on the fit, he definitely did his thing and I think it looks good on me. He did good with this whole collection,” Mosey added.

The full Marcelo Burlon 10th anniversary collection – including the Kappa and Alpha Industries collab – can be viewed on the brand’s website.