HomeFashionPalace and Rapha Reunite to Celebrate the Return of Tour de France...
FashionStyle 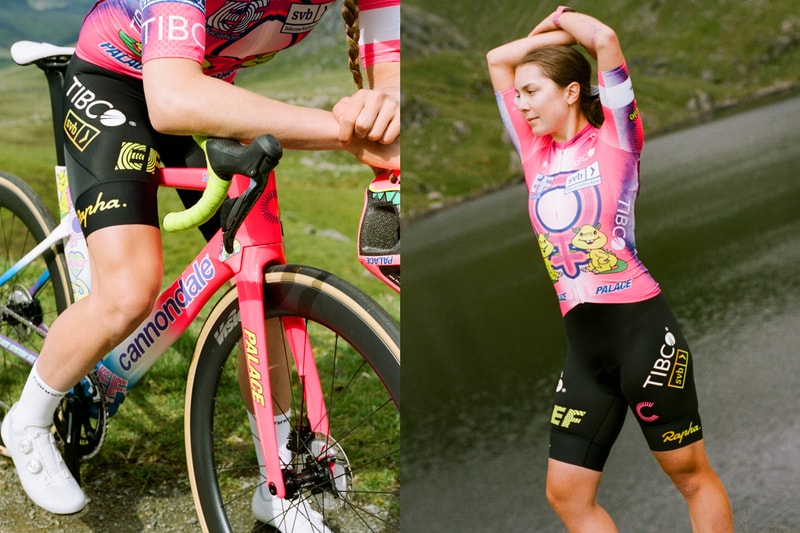 Palace's 2020 collaboration with Rapha was one of its most unexpected link-ups, but it turned into much more than just another dual-branded capsule. Following the collaboration, the EF Pro Cycling Team won the Giro d'Italia stage despite kit fines, and HYPEBEAST subsequently deep-dived into the hype behind Rapha, the unexpected crossover between fashion and cycling, and an in-depth look into Palace's best collaborations. Now, the London-based skateboarding stalwart has teamed up with Rapha again, this time around celebrating the return of Tour de France Femmes.

For the first time since the 1980s, women riders will get the chance to compete in the world's most famous cycling race. To celebrate this Tour de Force, Palace and Rapha are releasing a limited-edition run of switch-out kits for the riders of the EF Education-TIBCO-SVB and EF Education-EasyPost teams.

Complementing this is the full team livery overhaul, which sees its fleet of Cannondale race bikes, including the Cannondale SuperSix EVO which will be sold to the public, as well as POC helmets and Crocs, get covered in a new design penned by Palace. Within this release, you'll find The EF Education-TIBCO SVB team kit that comprises the Women’s Pro Team Aero Jersey, Women’s Pro Team Training Jersey and Women’s Pro Team Bib Shorts II. As for the EF Education-EasyPost team, the kit consists of the Pro Team Aero Jersey, Pro Team Training Jersey and Pro Team Bib Shorts II. Regardless of the team kit, both are complemented by dual-designed socks, caps and musettes.

All of this will release through Rapha's Clubhouses and online store, as well as on Palace's website and in-store worldwide. The Cannondale SuperSix EVO frameset will be available through Palace's website, Rapha and on Cannondale's website. To make sure the drop is fair game, Palace is serving up three localized time drops across UK, EU, Canada and the USA and the Asia-Pacific regions.

A select range of Rapha x Palace on-bike items will be made available exclusively to the Rapha Cycling Club members who were active on or before June 28, or have renewed a previously lapsed membership by the day preceding the commercial launch, the date of which will be announced soon.

Stay tuned to HYPEBEAST for more information. For now, take a look at Palace and Rapha's collaboration in the gallery above.

In case you missed it, take a loot at NIGO for KENZO SS23.