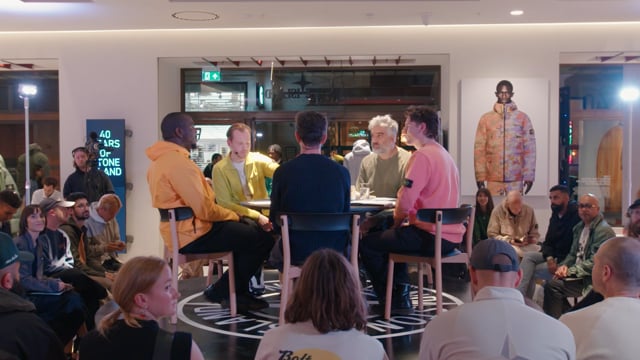 Earlier this month, the Stone Island Famiglia arrived in London to join Hypebeast in celebrating its 40th anniversary. Inside the Brewer Street flagship, guests (including Carlo and Sabina Rivetti) were seated for a panel discussion that took a deep dive into the brand and the communities surrounding it, were able to take a first look at the collaborative magazine produced by Hypebeast for Stone Island, before having all-important beers and listening to music from Jordss.

The roundtable – taking place around an actual round table in the middle of the space -- saw Andrea Moro of Stone Island, Joshua Doherty of Soho Warriors, Sergio Ricciardone of C2C Festival, Archie Maher of Arco Maher in conversation with Ayo Ojo -- fashion journalist and editor-in-chief of The Fashion Archive. Questions posed to the panel ranged from the reason behind Stone Island’s popularity with football fans to their favorite periods from its history. Moro, who heads up the brand’s Research and Experimentation department, reflected on his two decades with the company, recalling the first Stone Island piece he’d ever bought (a navy crew neck knit), while Ricciardone shed light on the musical partnership between himself and the brand -- throwing in a few anecdotes about the gigs he promoted back in the 90s.

For Doherty and Maher, a designer and a fashion archivist respectively, Stone Island has become a staple in their lives – despite them both being born decades after its inception. Doherty shared details of the brand’s collaboration with his team Soho Warriors, and particularly the Famiglia’s generosity around the Chinatown Cup Tournament in New York, and Maher provided insight into his extensive archive of pieces – dubbing the Ice Jackets his favorite items.

You can watch the full panel talk in the video above. The special-edition Hypebeast x Stone Island Famiglia magazine is available to purchase now on HBX and Stone Island stores.