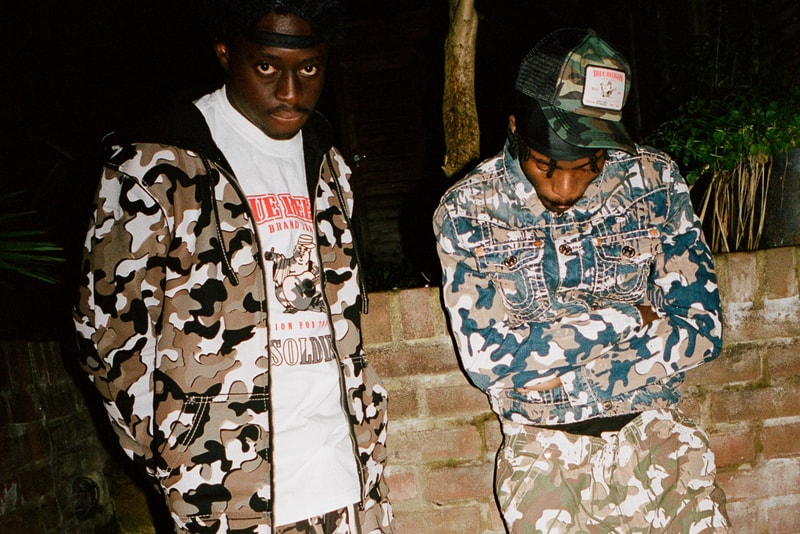 “While camouflage prints are part of True Religion’s DNA, today’s headlines have made us look at them differently. When we learned about Soldier’s story and how he uses camo as a message for peace, we knew this was the right partnership for us,” said Zihaad Wells, SVP, Creative Director for True Religion, in a statement. “We’re proud to partner with a young, upcoming designer who is also passionate about giving back to those in need.”

Soldier, who was born in Leonard Iheagwam, creates artwork inspired by his upbringing. He specifically gravitated toward camouflage cargos while growing up in Lagos, Nigeria, where he sought inspiration from the international hip-hop scene. Notably, the look was not appreciated in Nigeria, where the military stopped the artist on the street and demanded that he strip on the spot; however, it did breed the foundation for his artistic presence today.

“The aim of my paintings is to serve not only as a hiding place with its symbolism but also as a way to reveal a whole culture and create a new meaning,” Soldier said. “Taking the normal military theme that represents violence and creating a more beautiful meaning. Partnering with True Religion, a brand whose identity in the hip-hop scene is unmatched, was an important career milestone for me and a way I could give back to a community I grew up in.”

The collection is now available to shop on True Religion's website. Prices range from $69 USD to $259 USD.