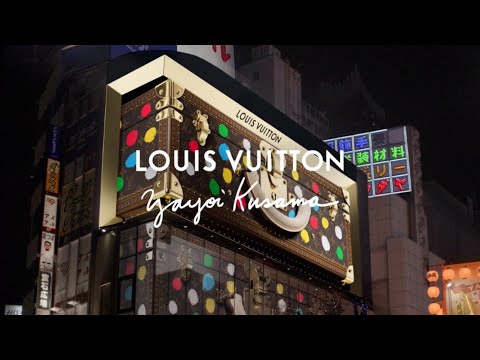 After early shots from onlookers were teased last week, we now get a closer look at the Yayoi Kusama x Louis Vuitton animations currently on view at Tokyo's giant Cross Shinjuku Vision billboard.

The massive 3D anamorphic display starts with a polka-dotted LV Damier trunk which opens up to reveal three of Kusama's iconic pumpkins. The yellow one, famously installed on the art island of Naoshima, is worn by the artist as a helmet as she's seen peering over the ledge. The animations then pivot to visuals of shimmering orbs from her Narcissus Garden artwork and other polka-dotted LV objects.

The Yayoi Kusama x Louis Vuitton display is set to run at the billboard outside of Shinjuku station’s east exit until December 7 and the collaboration is set to launch in January 2023.

"Ten years after a first collaboration, Yayoi Kusama’s symbolic objects, hypnotic motifs, and imaginings of infinity take over the Maison’s own emblems, creating magical objects that transcend time and space. First revealed on the Cruise 2023 runway, this year’s collaboration brings not only the artist’s signature dots to the Monogram canvas, but also explores a wide range of recurring themes," writes Louis Vuitton of the joint project.

More information can be found on LV's special interactive site.

In other news, teamLab transforms historic castle into an interactive art space.