HomeBitcoinA Call With Long Odds: Has the Price of Bitcoin Bottomed for...
BitcoincryptocurrencyFeaturedFinanceNewsStickyTechnology

A Call With Long Odds: Has the Price of Bitcoin Bottomed for Now? 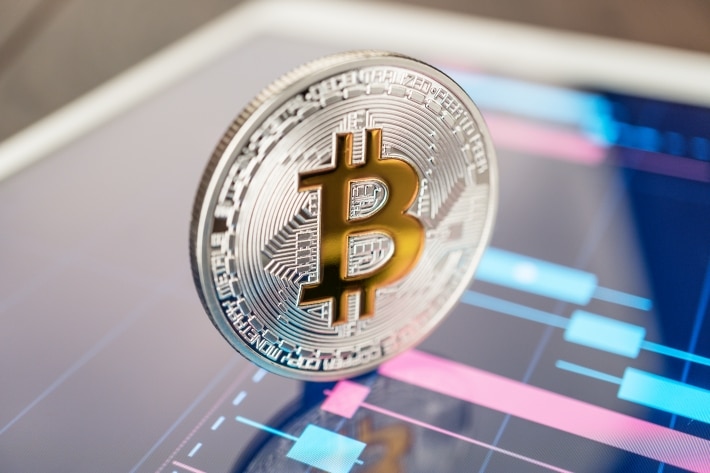 Bitcoin has managed to return from a precipice, as crucial support levels seem to have halted the relentless onslaught of liquidation waves, aided by a broad-based rally in the wider risk asset universe.

As the world’s largest cryptocurrency by market capitalization rescaled the $30,000 price level over the weekend, a veritable cacophony of headlines pronounced gleefully that Bitcoin’s price just established a new nadir and that the most painful period for crypto investors and Bitcoin enthusiasts has now been relegated to the past, at least for the foreseeable future.

We remain much more circumspect on Bitcoin’s prospects, however, with the prevailing fragility of the cross-asset price dynamics leading us to a much more despondent interpretation of the current situation. Let’s delve deeper.

A few days back, as the S&P 500 index tumbled into the bearish territory and BTC seemed bent on breaching a critical support level, we had noted that the conviction around a sub-$20,000 Bitcoin price was growing. However, two back-to-back events then upended the entire calculus. First, the Atlanta Fed President Raphael Bostic floated the idea of a rate hike pause in September 2022. 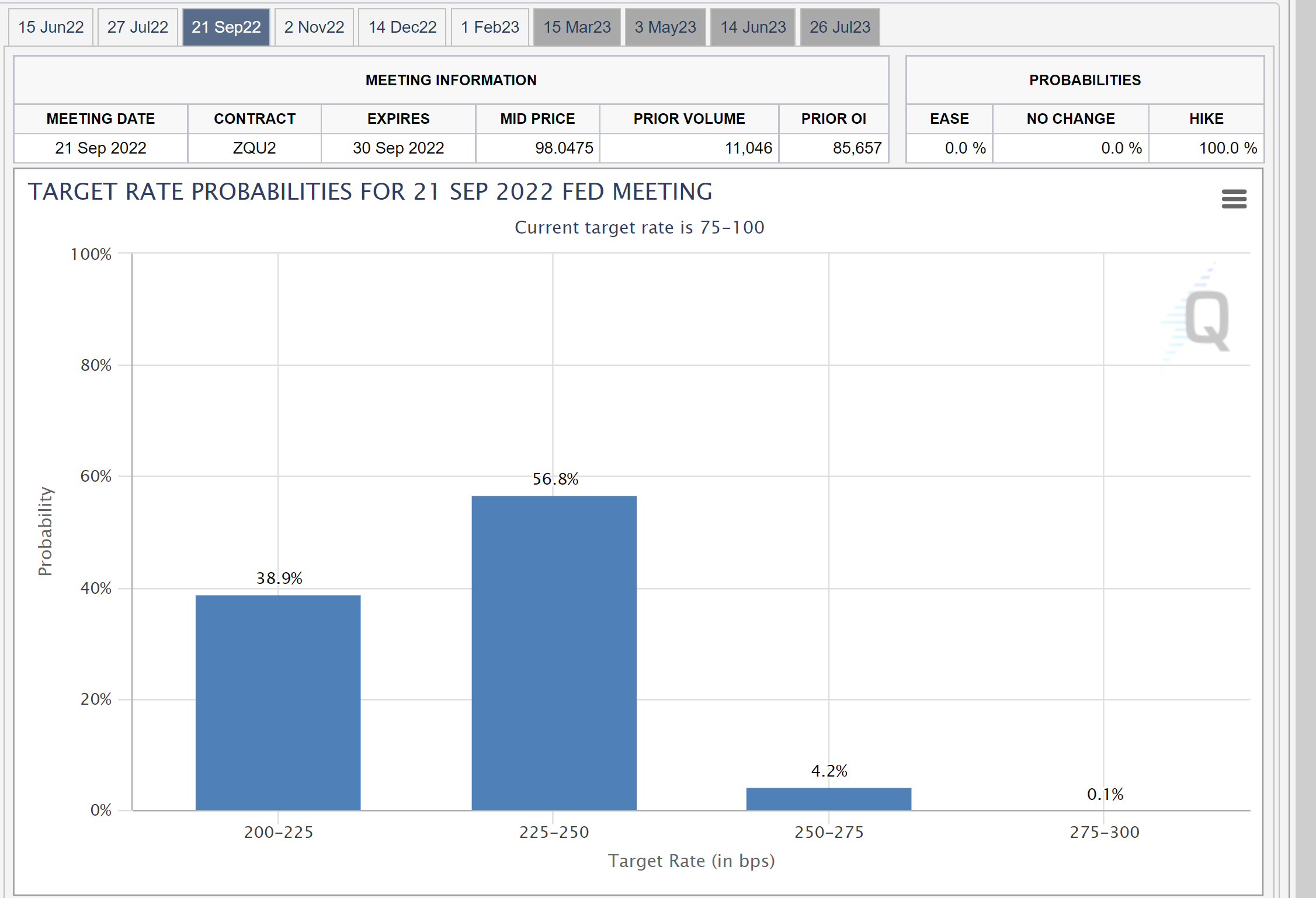 In fact, the probability that the Fed Funds rate continues to hover at 200-225 basis points through September 2022 has now soared to nearly 40 percent, illustrating the market's confidence in calling for a rate hike pause.

Second, aided by a dramatic normalization in used car prices, many analysts expect the US CPI to moderate slightly going forward. Bear in mind that the Core PCE index has already registered four consecutive months of annualized declines. Moreover, given that inflation is calculated on a rate of change basis, even if the prices persist at the present level, the CPI will still start to decline. This is just a function of the underlying math. Additionally, as indicated by a collapse in the personal savings rate, the health of the US consumer is declining, which again bolsters the CPI renormalization prognosis.

Bear in mind that the US equities have been hammered over the past few months as soaring inflation expectations necessitated a hawkish interest rate trajectory. As interest rates increase, the future cash flows – which make up the bulk of the investment thesis around high-growth stocks – are discounted much more steeply, thereby decreasing the present value of those cash flows and paving the way for a substantial decline in stock valuations. However, now that peak inflation calls are growing more forceful, some investors are looking ahead to a reversal of the prevailing regime, leading to the recent bear market rally in US stocks and, by extension, in Bitcoin and the wider crypto sphere.

We’ve continued to point out ad nauseum the troubling case of the current high-correlation regime between Bitcoin and high-beta US equities, which has played an important role in preventing Bitcoin from acting as an inflation hedge. While the fundamental reason behind this paradigm is still unclear, the growing institutional interest in Bitcoin has likely played an important role by spurring synchronous de-risking liquidation waves across Bitcoin and US equities, reinforcing Bitcoin’s “risky” profile for many investors. Bear in mind that risk is simply a function of volatility, and Bitcoin certainly has bucketloads of it. 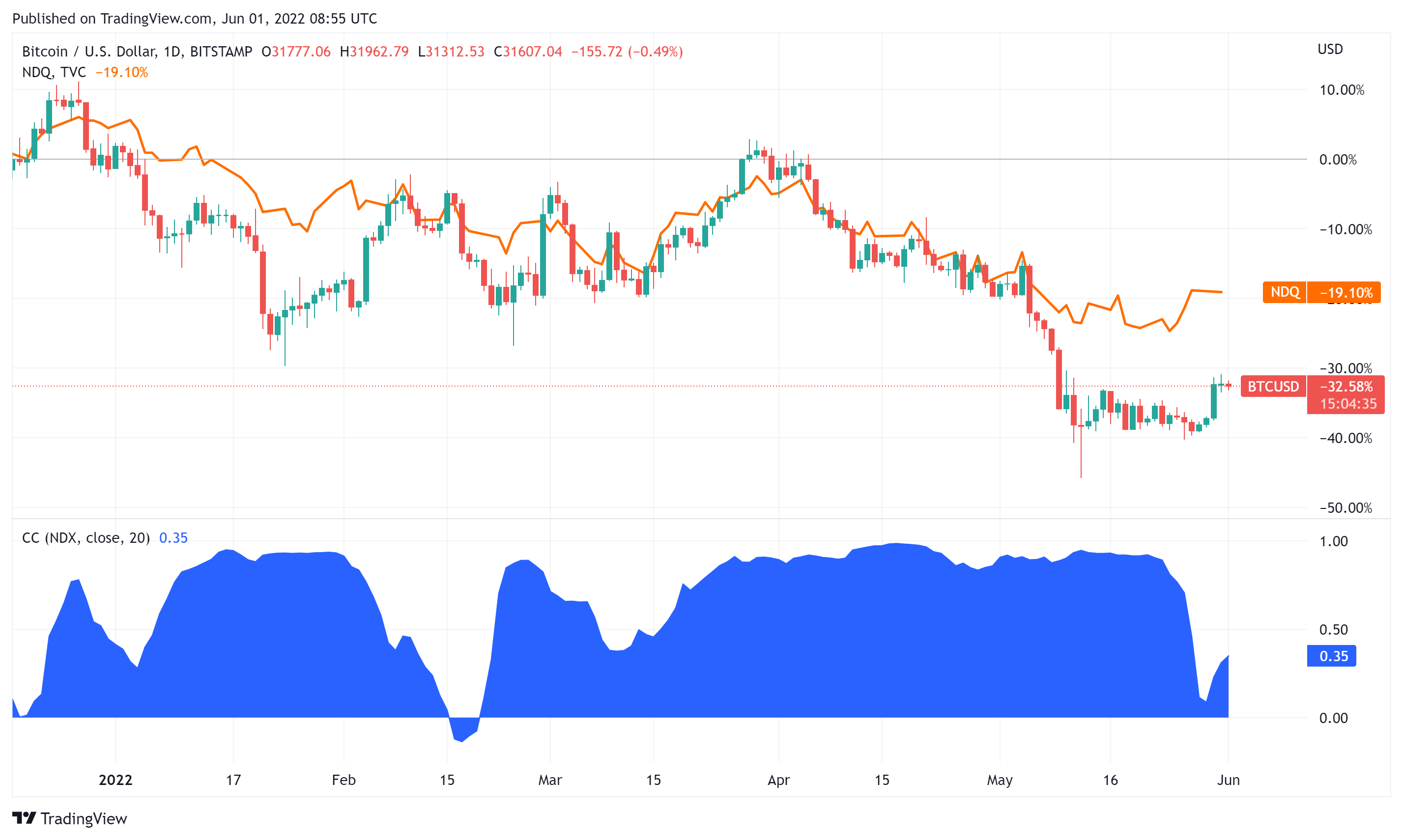 The chart above illustrates the correlation dynamics between Bitcoin and the Nasdaq 100 index. As is evident, the 20-day correlation was approaching 100 percent just a few days back, indicating that nearly all of the moves in Bitcoin were explained by the corresponding moves of the Nasdaq 100 index. However, a brief decoupling trend emerged recently when Nasdaq equities were able to soar even as Bitcoin languished. This brief decoupling spell, however, has now ended.

Readers should note that Bitcoin is a unique asset and, therefore, it should not maintain a high-correlation regime with US equities in a perfect world. Nonetheless, call it institutional bias or the side effect of Bitcoin’s growing financialization, we have to contend with this outcome for the foreseeable future. 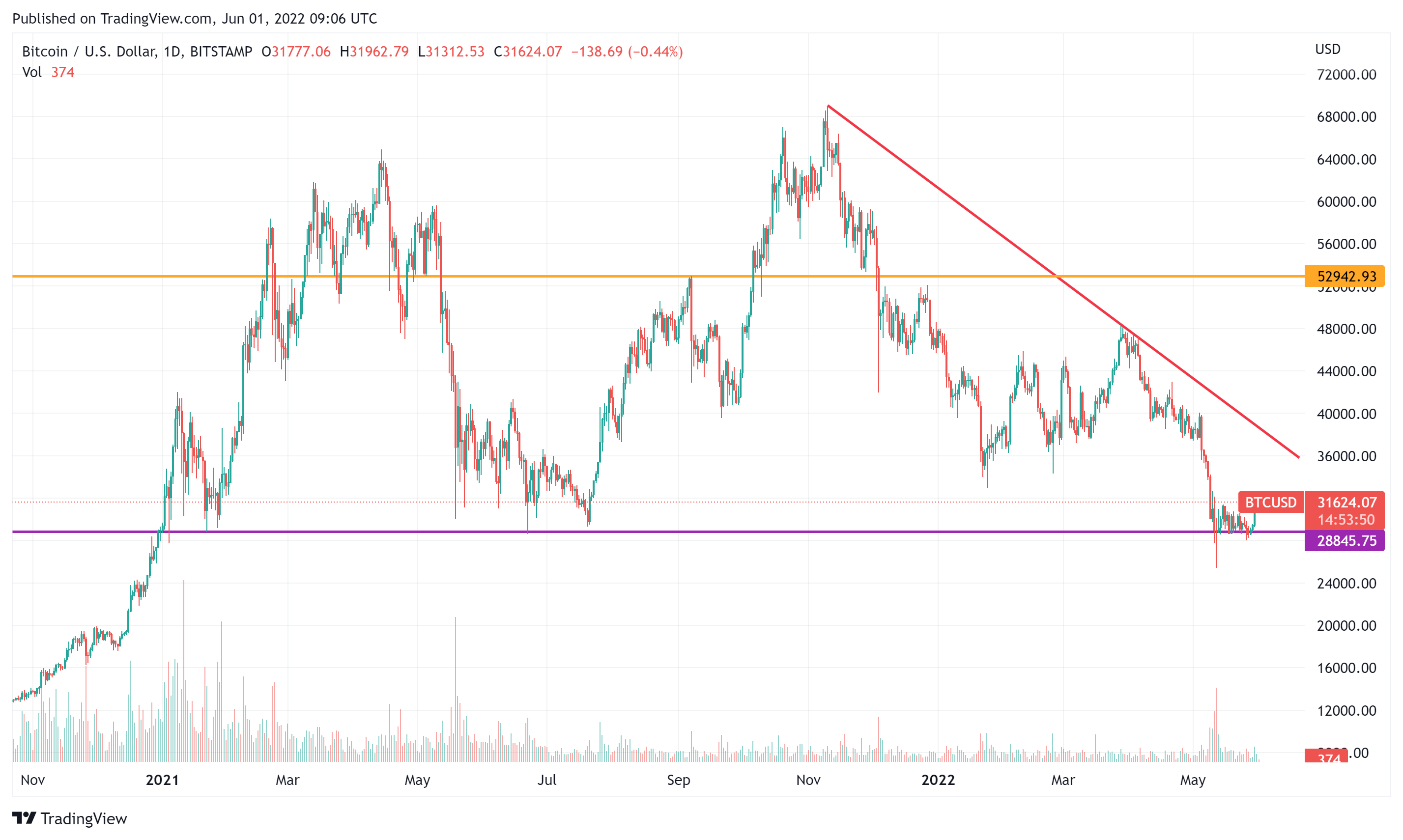 The chart above illustrates the crucial support level that has played an important role in preventing a deeper correction in Bitcoin’s price. 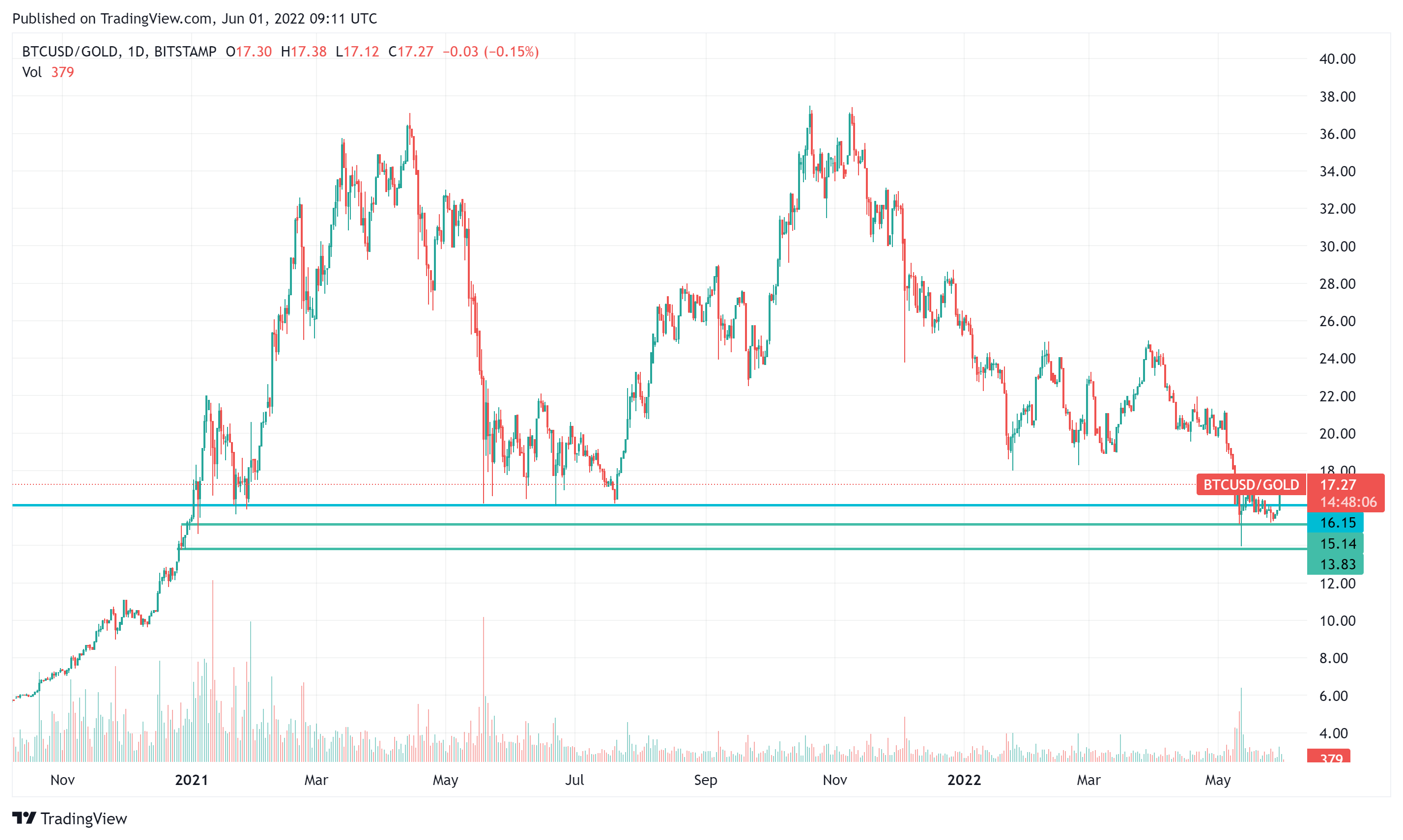 The above chart shows Bitcoin’s price in relation to gold. Notice that the current support was only able to hold because of a potent demand zone just below it. Moreover, the demand zone in question was only able to reverse the trend after being almost completely tapped out. This indicates to me that this zone might not hold the next time.

Let’s now go over the reasons why I think we are not out of the woods just yet.

On the flip side, we are looking to Ethereum’s upcoming “merge” event as the catalyst that might finally upend the current high-correlation regime between crypto and US equities. If this eventuality materializes, we would be confident in adopting a more sanguine outlook for Bitcoin and the rest of the crypto sphere.

The post A Call With Long Odds: Has the Price of Bitcoin Bottomed for Now? by Rohail Saleem appeared first on Wccftech.