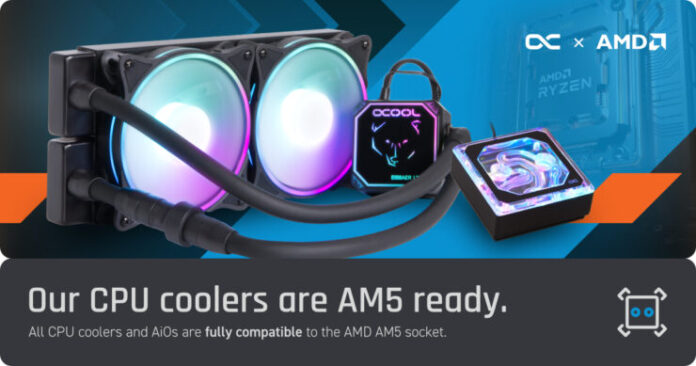 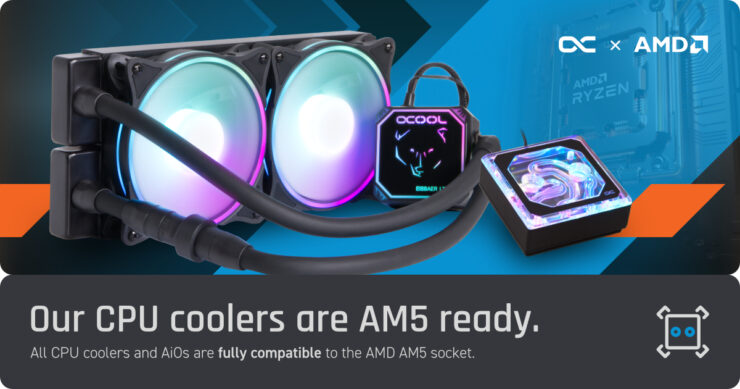 Just in time for the launch of the new AMD Ryzen 7000 "AM5" CPU launch in September, Alphacool announces that all CPU coolers and All-in-One solutions in the company's product range will be compatible with the AM5 socket. The required mounting kit is included for all coolers & AIOs, allowing the new Ryzen 7000 Series CPU compatibility without any issues.

Alphacool is well-known for using pure copper for its liquid coolers, as seen in the antechambers, water channels, and fins. The company states that its radiators "offer the highest thermal conductivity," with the limits on performance being much higher than a computer radiator with aluminum parts. Copper is also a great dissipator of heat. More companies have adapted to using copper in their parts over the last several years.

Another nice feature of Alphacools products is silent operations. Alphacool tends to choose high-performance fans to produce the best cooling performance, as they are adapted specifically for their radiators and AIO systems. More reviews have shown that with the inclusion of copper parts and their specific manufacturing strategy, most Alphacool parts offer increased performance, especially with water-cooled components.

All CPU Cooler & AIOs are AM5 ready!

Just in time for the launch of the new AMD processors in September 2022, we can announce that all CPU coolers and All-in-One solutions in the Alphacool product range are compatible with AMD’s AM5 socket. The required mounting kit is included with all coolers and AIOs and enables the new Ryzen 7000 Series processors to be water-cooled with Alphacool products right from the start.

Alphacool limits parts, such as screws, from over-tightening with a metal plate to prevent further penetration of the radiator or AIO system further. The company also provides several sizes and options through its vast portfolio of manufacturers that the company uses. Alphacool not only offers multiple configurations for their cooling options but with the newest inclusion of AMD's AM5 series of CPUs, the company will extend its total consumer reach with more consumer options.

AMD's AM5 platform will only support the newer DDR5 in dual-channel configurations and drop the DDR4 module compatibility. AM5 is also expected to support PCIe 5.0, provide upwards of 170W TDP through the AM5 socket, and offer a PPT, or Package Power Tracking limit, of close to 230 Watts. When it comes to cooling the processor, however, AMD has chosen to be backward compatible with pre-existing AM4 CPU cooler options, so consumers will not have to replace those components before launch.