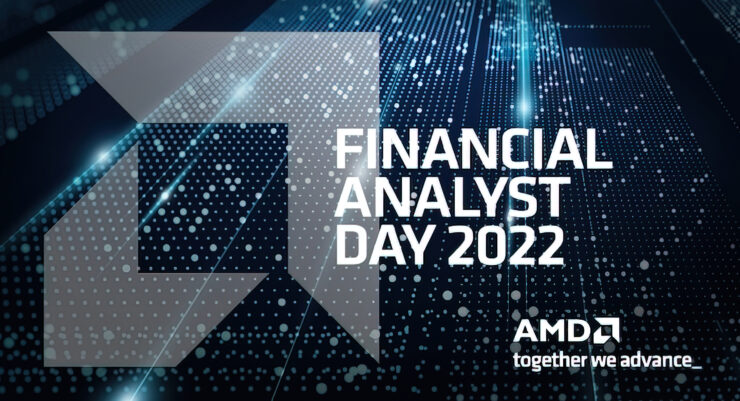 Yesterday, during its Financial Analyst Day, AMD unveiled its brand new CPU & GPU roadmaps, offering a diverse range of next-generation product families. All of the information provided by AMD did seem a bit overwhelming considering the number of products announced so we will try our best to offer a general overview of everything that's coming between 2022-2024.

Once again, this is just a general overview of what was announced and if you are looking for more detailed information, you can always head over to the linked articles for each product family that's of interest to you.

Starting with the CPU roadmap, AMD confirmed that its next-generation Zen lineup will feature 5nm, 4nm, and 3nm CPUs through 2022-2024. Starting right off the bat with Zen 4 which will be launching later this year on the 5nm process node, AMD will also offer Zen 4 3D V-Cache chips in 2023 on the same 5nm process node, and then Zen 4C which will utilize an optimized 4nm node, also in 2023. 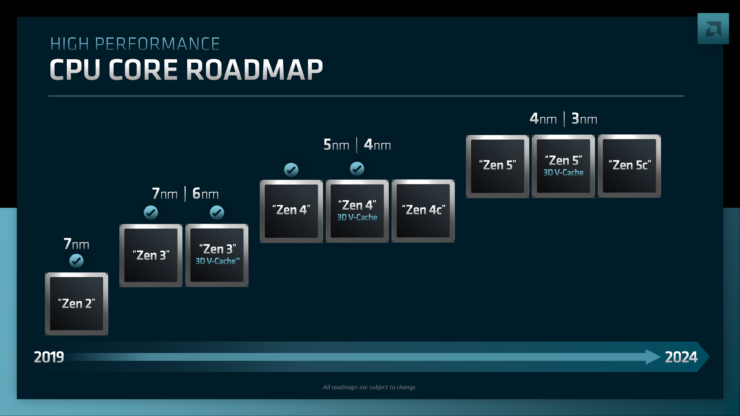 AMD's Zen 4 will be followed by Zen 5 in 2024 which will also come in 3D V-Cache flavors and will be utilize a 4nm process node while the Compute-Optimized, Zen 5C, will leverage from the more advanced 3nm process node. Following is the full list of Zen CPU cores confirmed by the red team:

Which next-gen Zen CPU are you looking forward to the most? 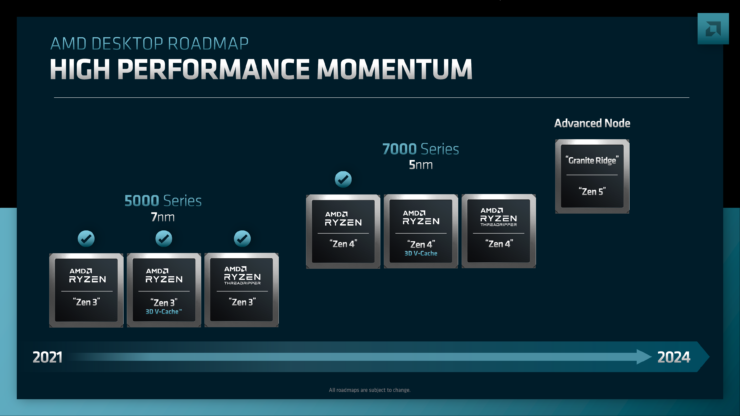 The follow-up to Raphael will come in the form of Granite Ridge in 2024 and will be based on the 4nm Zen 5 cores. AMD has only confirmed the standard Zen 5 parts and no V-Cache flavor is listed on the roadmap however, that isn't the case on the server roadmap. Following is the list of desktop CPUs confirmed by AMD:

Which next-gen AMD Desktop CPU are you looking forward to the most? 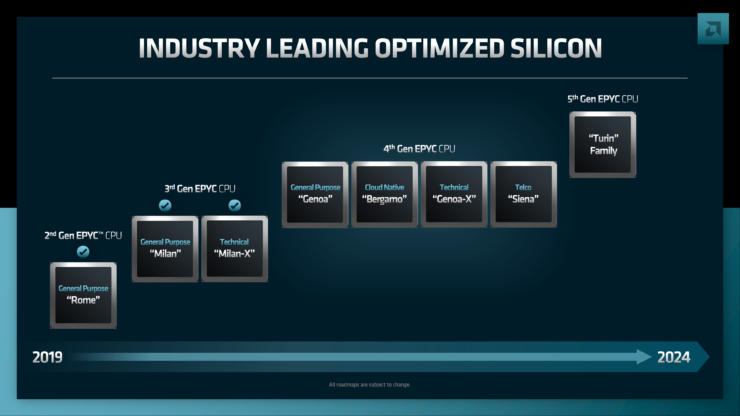 The follow-up to 4th Gen EPYC will launch in 2024 in the form of EPYC Turin which will utilize the 4nm Zen 5 core architecture. Following is the full list of EPYC CPUs confirmed by AMD:

Which Next-Gen AMD EPYC CPUs are you looking forward to the most?

On the notebook front, AMD confirmed that they will have Phoenix Point with Zen 4 and RDNA 3 core IPs on the 4nm node by 2023 and the follow-up to that will be called Strix Point which will be utilizing Zen 5 and RDNA 3+ IPs on an advanced process node by 2024. The Phoenix Point family will fall under the Ryzen 7000 Notebook lineup while Strix Point will fall under the Ryzen 8000 CPU lineup. Both will be utilizing a chiplet-based design. 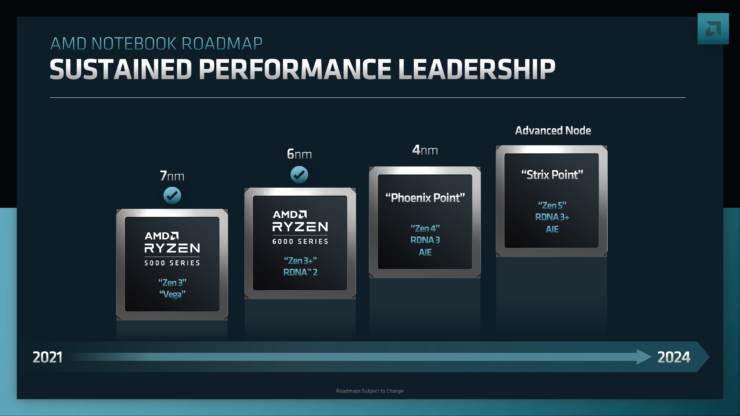 Which next-gen AMD Notebook CPUs are you looking forward to the most?

Shifting gears to AMD's GPU roadmap, David Wang and his team at the Radeon segment unveiled RDNA 3 'Navi 3x' GPUs based on 5nm process nodes in 2022 followed by RDNA 4 'Navi 4x' GPUs on an advanced node by 2024. 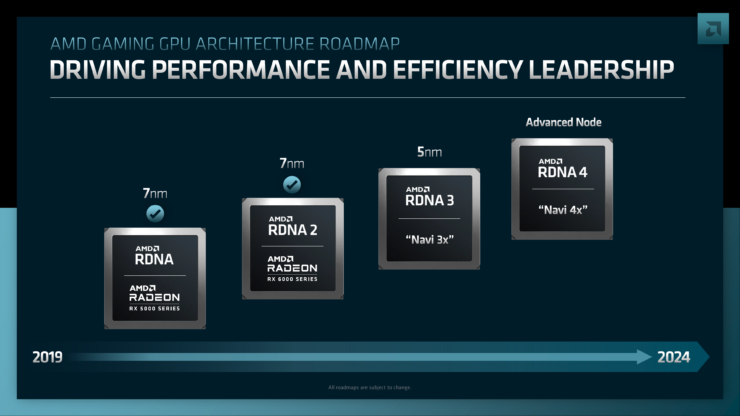 Which next-gen AMD Radeon GPUs are you looking forward to the most?

Lastly, we have the server GPU roadmap which starting with CDNA 3 architecture will no longer technically be a GPU-only design but shift to an APU-styled architecture. The Instinct MI300 will be the only family in the CDNA 3 lineup based on the 5nm process node and utilizing multiple CDNA 3 configurations with Zen 4 cores. The family will be launching next year in 2023. 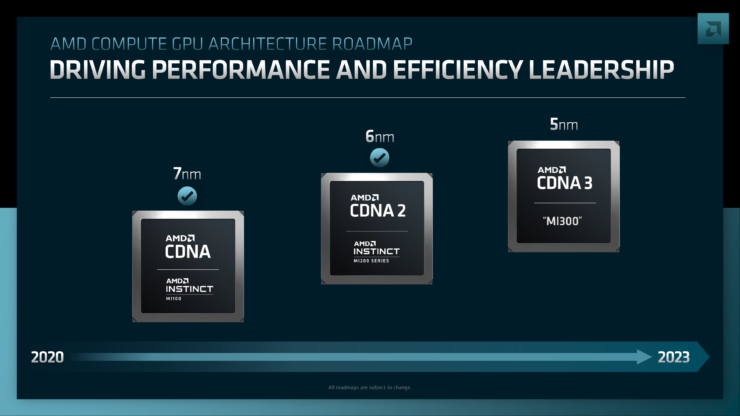 That's a wrap for the roadmaps, let us know your thoughts in the comments for AMD's next-gen CPU and GPU product portfolio.