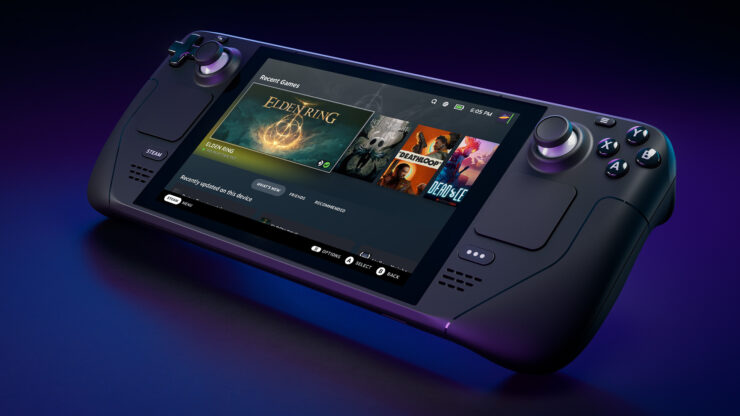 AMD's Van Gogh SOC currently powers the Valve Steam Deck handheld console but it looks like the company might be working on a successor to the SOC which will feature a design similar to its next-generation Phoenix APUs and could be featured inside the next-generation Steam Deck console for handheld gamers.

The new information comes from Moore's Law is Dead which has only heard about AMD's plans for a new SOC that will act as a successor to Van Gogh. This SOC shares a lot of similarities with AMD's Phoenix Point APUs which will be combining Zen 4 CPU and RDNA 3 GPU cores in 2023 for laptops. Although the Van Gogh successor doesn't have a name right now, it is being referred to as the little Phoenix chip (not official).

This new SOC is said to be an 'Ultra Low Power & Compact' version of the Phoenix Point APUs and as such, should be aiming for custom solutions such as the Valve's Steam Deck handheld gaming console. The current Steam Deck console is based on the Van Gogh SOC and features a Zen 2 CPU and RDNA 2 GPU core. With the successor, we can expect a big jump in performance since we are getting the brand new Zen 4 cores for CPU and RDNA 3 cores for GPUs. The Phoenix Point lineup is being fabricated on a 4nm process node so it is likely that AMD will retain 4nm for custom solutions too. 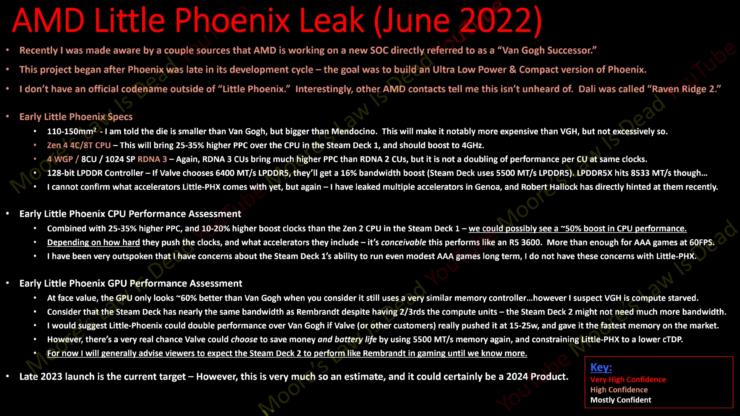 As for the specifications, the Van Gogh successor, Little Phoenix, is said to feature a die size of 110-150mm2 which will be smaller than Van Gogh but slightly larger than Mendocino. The CPU will get 4 cores and 8 threads with a speculated boost clock of around 4 GHz, delivering a 25-35% increase in performance per clock. The GPU is said to get 4 WGP's or 8 Compute Units for 1024 cores in the new RDNA 3 core architecture. The clock speeds will see a boost and that with new newer uArch is said to deliver decent gains. The new SOC will also get a 128-bit LPDDR controller, giving the choice between LPDDR5-6400 or LPDDR5X-8533 memory. Phoenix Point does come with an AI Engine so we may get to see a similar solution for the Van Gogh successor though it's not confirmed.

What these specs mean for the next generation of Valve's Steam Deck handheld gaming consoles is that we can expect a 50% boost in CPU performance and a 60% boost in GPU performance. It looks like the new SOC is expected to launch sometime in late 2023 but could slip to 2024. So we may not get a Steam Deck replacement soon.