Well, it has finally happened, AMD's Radeon & NVIDIA GeForce graphics card prices are back to normal and are even selling below MSRP in some regions thanks to improved availability and continued decrease in GPU demand from the crypto mining segment.

It's Not Happening, It Has Happened! AMD Radeon & NVIDIA GeForce Graphics Card Prices Are Back To Normal & Even Available Below MSRP At Various Outlets

In the latest report by 3DCenter, we can see that the GPU prices for both NVIDIA GeForce and AMD Radeon graphics cards continue to fall which shouldn't be a surprise as that's the trend we have witnessed since the end of 2021. The NVIDIA GeForce RTX 30 series prices now average at around 2% over MSRP while AMD's Radeon RX 6000 series averages with a selling price of 6% below MSRP.

In addition to that, GPU supply is abundant and currently, there's no retail outlet in the world that doesn't have graphics cards on their store shelves (which wasn't the case a few quarters back). The red and green teams have also announced various promos such as the 'Restocked and Reloaded' by NVIDIA and AMD also announcing how its Radeon RX 6000 series cards are available at MSRP-level prices.

Talking about AMD prices first, once again, almost all graphics cards within the Radeon RX 6000 series are now available below MSRP Even the newest flagship, the 6950 XT is about 4% below MSRP which is great.

It is only the Radeon RX 6800 series cards that are still selling for an average of 3-6% over MSRP. This has been the case with these cards since their launch and one reason is that the RX 6800 Non-XT has been discontinued silently while the 6800 XT is still short in supply with AMD focusing on the higher-end RX 6950 XT & 6900 graphics cards. At the same time, the RX 6500 XT is available at a price that's 23% below the MSRP which means trouble for Intel's upcoming Arc A380 graphics card.

The NVIDIA lineup averages around +2% prices over MSRP with the entire high-end range now available at or below MSRP. It's the low-end and mainstream segment that is yet to hit MSRP but they are very close. The GeForce RTX 3060 Ti graphics card is still selling at an average of 16% above MSRP.

The enthusiast RTX 3080 Ti graphics card can actually be found 13% below the MSRP which is impressive given that it offers performance similar to the RTX 3090 Ti which costs several hundred dollars more. It looks like even the RTX 3090 Ti can be found for 16% below MSRP at retailers.

This along with prices now coming back at or below the MSRP means that the GPU market is out of the worse and prices/availability can now go back to normal. However, at the same time, I am not as happy with the price update as I should be simply because we are entering a new generation of graphics cards later this year and by this time, most of the existing graphics cards would have received discounts and price cuts but that has not been the case this generation due to inflation in the GPU market. 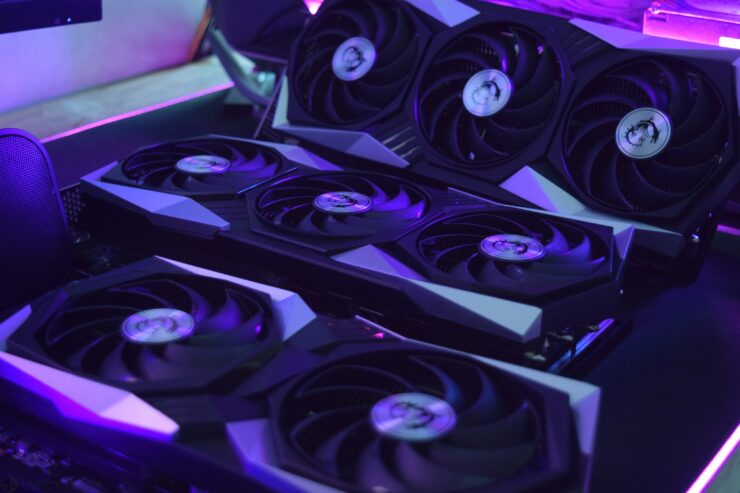 Furthermore, both GPU vendors (mostly NVIDIA) are now sitting on a surplus of existing inventory of GPUs which needs to be cleared before the launch of the next-gen lineup. The crypto dump will further make things worse for the GPU vendors as consumers will be getting cards that had been used in mining systems at really low rates in the reseller marketplace such as eBay. We are already seeing various GPUs such as the RTX 3090 and 3080 graphics card being sold way below the MSRP in the used marketplace.

We can only hope that we never see such a scenario in the market ever again since it's the best for consumers around the globe. With that said, a major GPU price crash might be looming around the corner, more on that here.

The post AMD Radeon & NVIDIA GeForce Graphics Card Prices Are Back To Normal & Below MSRP In Some Regions As GPU Mining Days End by Hassan Mujtaba appeared first on Wccftech.