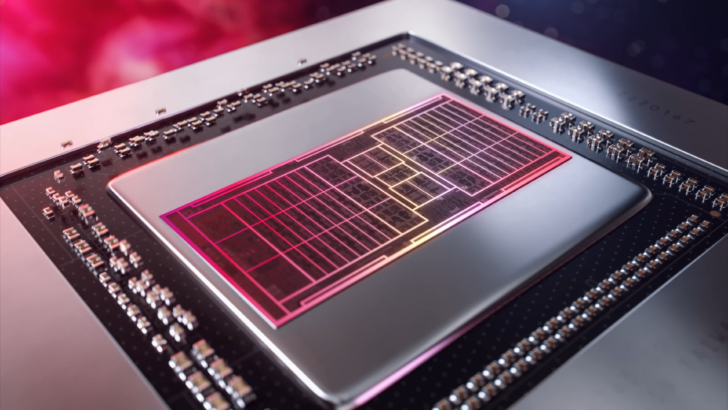 The AMD RDNA 3 marks the beginning of the chiplet era in the gaming GPU segment. AMD has been the pioneer of the chiplet revolution with its Ryzen & EPYC CPUs. The red team was also the first to launch its chiplet GPU in the form of the Instinct series but now, it's time for consumers to get some of the good chiplet action on their brand-new GPUs. According to AMD, the chiplet GPU design offers a disruptive architectural approach versus a standard Monolithic design.

The AMD Navi 31 GPU with RDNA 3 architecture will offer a single GCD with 48 WGPs, 96 Compute Units with 6 Shader Engines and each Shader Engine featuring 8 dual compute units. This will give out a total of 12,288 SPs or stream processors. This is an increase of 2.4x in cores compared to the 5120 SPs featured on the Navi 21 GPU. AMD is using a dual issue SIMD unit design which can do FP, INT & AI operations with twice the instruction issue rate. The GPU also packs 2 AI accelerators per CU which deliver a 2.7x performance improvement. There's also BF16 support.

The GPU or the Navi 31 GCD is said to measure 300mm2 & will come packaged on TSMC's 5nm process node. AMD's latest RDNA 3 GPU packs a total of 58 Billion transistors and the top die can deliver up to 61 TFLOPs of Compute performance. As per AMD, the Navi 31 GPU packs 165% more transistors per mm2 versus the 7nm RDNA 2 "Navi 21" GPU. The company says that it went past its goal of a 50% performance per watt improvement and achieved a 45% improvement gen-to-gen.

RDNA 3 Gets Bigger Caches Across The Board

Ray Tracing Gets Even Better

AMD's 2nd Generation ray tracing implementation comes with a larger RT accelerator that offers 50% more performance per CU. Some of the features include 50% more rays in flight, dedicated instructions, and new ray box sorting and traversal. With the help of larger caches (helping within Complex RT workloads), AMD is expecting up to 80% ray tracing performance gains (at 2.5 GHz).

Moving over to the Geometry and Pixel pipelines, AMD highlights the use of MDIA (Multi-Draw Indirect Accelerator), a 12 Primitive/CLK (50% increase), and twice the hardware Prim/Vert Cull Rates. In Pixel, AMD touts a 6 Prims Rasterized/Clk (50% increase), 192 Pixels/Clk (50% increase), Random Order Opaque exports, and Pixel Wait Sync. The rest of the stuff is pretty much what we know from the unveiling.

The revolutionary new AMD RDNA 3 "Navi 31" GPUs will be headed to consumers next month on December the 13th so stay tuned for more info.