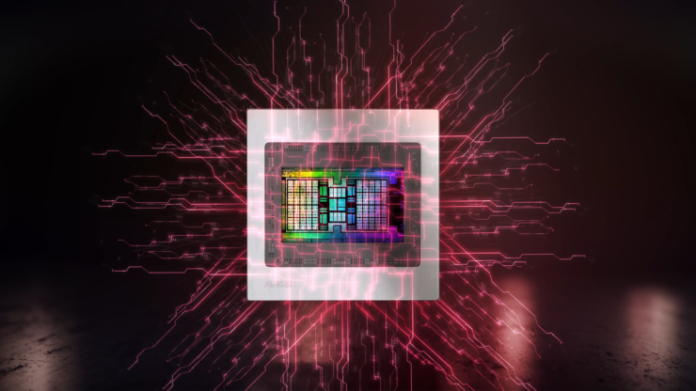 The rumored die size of AMD's upcoming RDNA 3 flagship GPU, the Navi 31, which will be fabricated on TSMC's 5nm process node has been revealed.

The rumors come from Greymon55 who has revealed the alleged die size of the next-gen GPU powerhouse from camp red. Some of the key features of the RDNA 3 GPUs highlighted by AMD will include:

According to the rumor, the AMD RDNA 3 GPU was expected to feature a total die area of 600mm2 but that actual GPU die size would be almost half the size. The reason for this is that the whole die package will consist of not just the GPU "GCD" but also the cache "MCDs". The previous rumor has pointed out a total of six RDNA 3 MCDs to be featured on the flagship Navi 31 GPU. Each MCD will be separate from the GCD but will be fused into the same package. The RDNA 3 Navi 31 GCD will be smaller and measure around 350mm2 in die size.

For comparison, AMD's existing Navi 21 RDNA 2 GPU has a die size of 520mm2 so you are looking at a 33% size reduction on the TSMC 5nm process node. The MCDs on the other hand are expected to be fabricated on TSMC's 6nm process node. An interesting comparison has been made by the folks at 3DCenter who report that the Navi 21 GPU without its Infinity Cache & memory controllers, will end up around 375mm2 in die size. So that's pretty much close to the Navi 31 GPU but the new flagship features more than twice the cores so if the new chip was to be based on the older 7nm node, we might have a GPU die over 500mm2.

It is also mentioned by @Kepler_L2 that the RDNA 3 GPU architecture incorporated within the Navi 31 SKU has removed lots of on-die technologies such as XGMI, GDS (Global Data Share), the Legacy Geometry Pipeline, or Legacy Scan Converter, to save room. It is likely that these GPU capabilities are not required by the RDNA 3 GPUs since they don't feature them.

The AMD Navi 31 GPU, the flagship RDNA 3 chip, would power the next-gen enthusiast cards such as the Radeon RX 7900 XT graphics card. We have heard that AMD will drop CU (Compute Units) in favor of WGP (Work Group Processors) on its next-gen RDNA 3 GPUs. Each WGP will house dual CU (Compute Units) but with twice the SIMD32 clusters as opposed to just 2 on each CU within RDNA 2. Rumors are that AMD has the option to select between Samsung and TSMC for the 6nm die.

According to the latest information, the AMD Navi 31 GPU with RDNA 3 architecture is expected to offer a single GCD with 48 WGPs, 12 SAs, and 6 SEs. This will give out a total of 12,288 stream processors which is lower than the previous count. This will also drop the overall compute performance unless AMD goes crazy with over 3.0 GHz clock frequencies on its flagship part. The Navi 31 GPU will also carry 6 MCD's which will feature 64 MB Infinity Cache per die and are also likely to carry the 64-bit (32-bit x 2) memory controllers that will provide the chip with a 384-bit bus interface.

Now, this is going to result in higher power draw and AMD seems to have confirmed this much that their next-generation graphics card lineup will feature higher power consumption but they will still be a more efficient option than what NVIDIA has to offer. The AMD Radeon RX 6950 XT already has a TBP of 335W so for a >2x performance gain, we can expect a final TBP for the Radeon RX 7900 XT to end up close to 400-450W.

The AMD Navi 31 GPU will be competing against the alleged 600W and 600mm2 AD102 GPU from NVIDIA that utilizes the Ada Lovelace graphics architecture when it launches later this year.