Amid a Predictable Flood of Obituaries, Bitcoin Bulls Should Write off the Rest of 2022 Along With the First Half of 2023 and Pin Their Hopes on the Next Halving Event 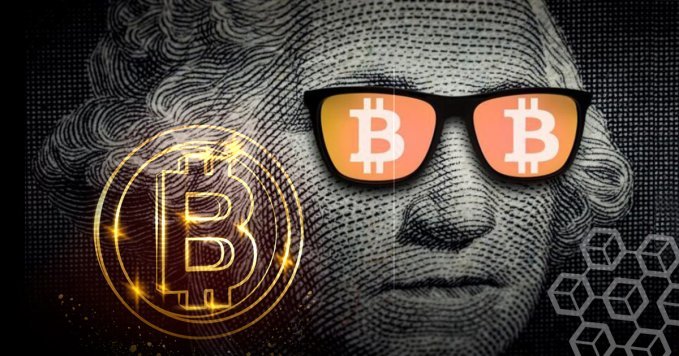 Sections of the financial media continue to write Bitcoin obituaries in sepulchral tones as the world’s premier cryptocurrency undergoes a painful yet typical correction process. In fact, as per the tabulation by 99bitcoins, the cryptocurrency has now been declared dead 459 times since its inception. 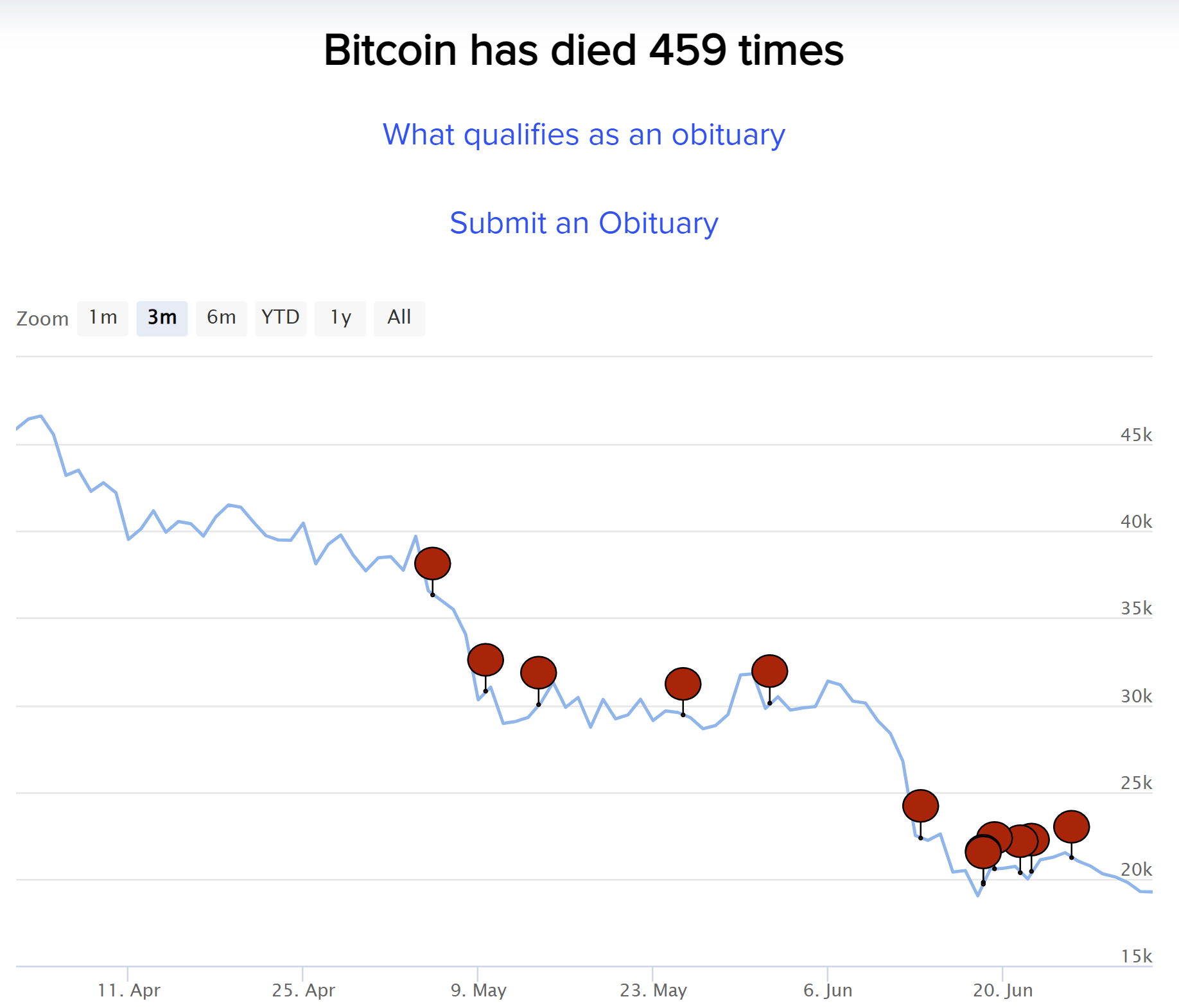 In stark contrast to these somber pronouncements, the Bitcoin ecosystem is, in fact, gaining prominence in the wider crypto sphere as the altcoins continue to suffer from a mass exodus of capital.

#Bitcoin is seeing increased discussion in the latter half of June after the majority of #altcoins have dropped 80% or more from their November market cap values. Historically, declining interests in inorganic #alt pumps are a positive sign for #crypto. https://t.co/GB33qFQwR8 pic.twitter.com/zMHNr6io0r

As illustrated by the tweet above, Bitcoin’s social volume is experiencing a resurgence as the alt-coins sphere crashes and burns.

This does not, however, mean that Bitcoin is about to resume its long-term upward trend anytime soon. Let’s delve deeper.

The fate of Bitcoin is inextricably linked with that of high-beta, growth-focused US equities, at least in the short term. Just as growth stocks derive their investment thesis from the present value of future cash flows, so does Bitcoin depend on its future adoption rate to justify its inherent valuation thesis. It is because of this dependence on future cash flows that growth-focused US equities have been hammered so severely as the Federal Reserve has embarked on a rate hike trajectory to try to curb the ongoing inflationary impulse by hammering the aggregate demand in the US economy.

For the uninitiated, as interest rates increase, the discount rate used to compute the present values of future cash flows also increases, thereby reducing those present values and rendering such stocks less attractive. Since Bitcoin is equally dependent on a rosy outcome vis-à-vis its future adoption rate to justify a high valuation, it is only natural for investors to treat the cryptocurrency as a major risk asset, leading to several synchronous liquidation waves across the crypto and equities sphere this year, and pumping the correlation between the two asset classes to an all-time high in the process. 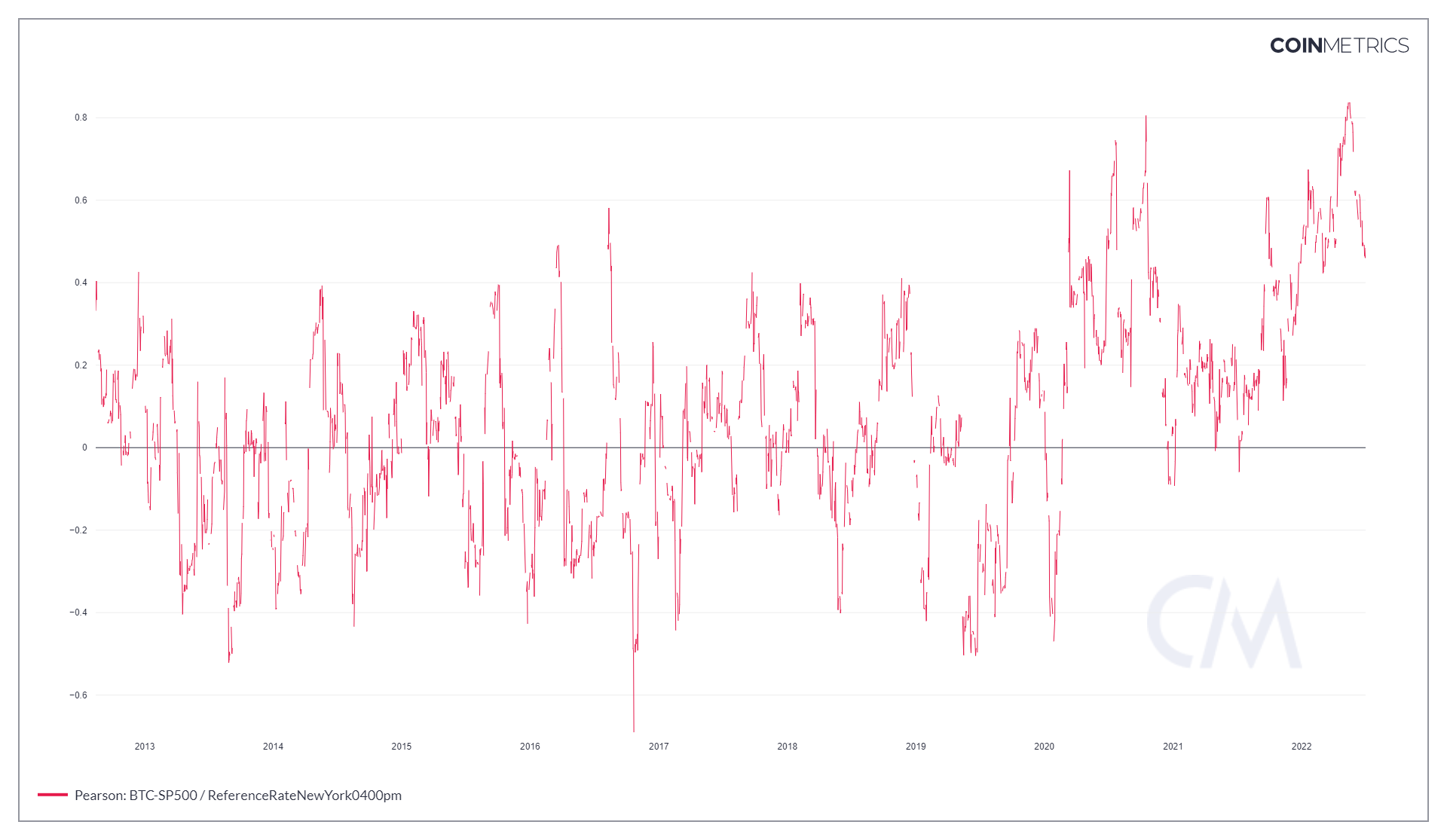 There is, of course, a simple explanation for this outcome. In the latter half of June, US stocks experienced a sizable bear market rally. However, Bitcoin was not able to follow suit due to an avalanche of liquidations and bankruptcies in the Decentralized Finance (DeFi) space, which hammered the sentiment and prevented the crypto sector from rebounding. As a result, the correlation between US equities and Bitcoin fell. This does not, however, mean that the synergetic relationship between the two asset classes has ended.

Up till now, US equities, Treasuries, bonds, and Bitcoin have continued to be hammered by the Federal Reserve’s hawkish stance. However, now an even more potent threat is emerging – recession. As a refresher, the price-to-earnings ratio (P/E) is often used to quantify a stock’s valuation. Until now, the stocks were being de-rated, that is, the price component of the P/E ratio was falling, thereby reducing the overall frothiness of valuations. Now, however, the earnings component is about to fall off the proverbial cliff as recession pronouncements grow louder. In fact, for many analysts, a recession is not a question of if but when.

Not a good look for the US economy. pic.twitter.com/PWGULbX8Lc

Against this backdrop, leading Wall Street analysts, including Morgan Stanley’s Michael Wilson, expect the S&P 500 index to carve out an ultimate bottom at around the $3,000 price level. Consequently, given the high-correlation regime between the two asset classes, investors should expect a sizable dip in the price of Bitcoin, in tandem with that of the S&P 500 index, when the much-feared recession strikes. 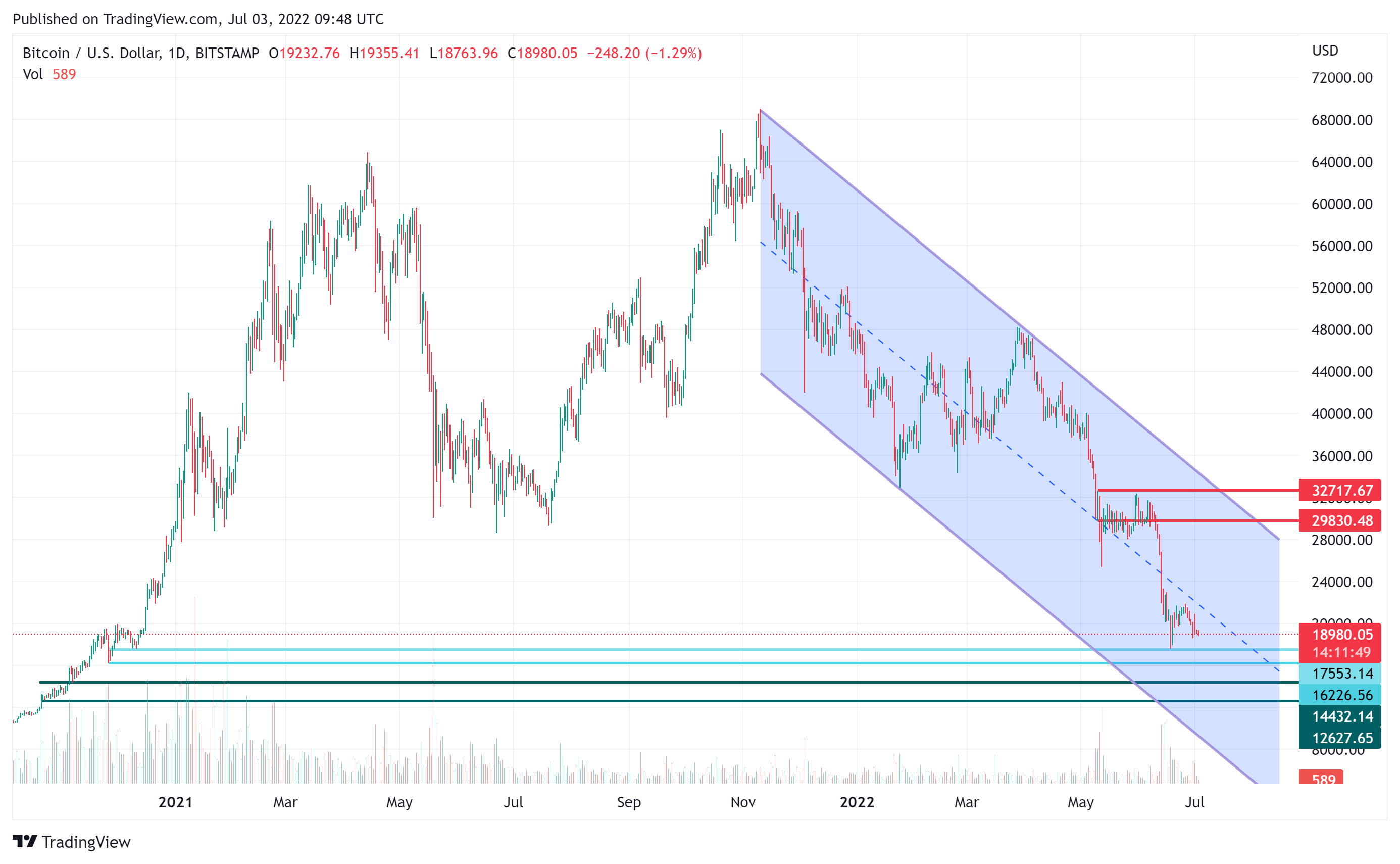 The chart above details the key technical parameters of Bitcoin. As is evident, the world’s premier cryptocurrency is in a medium-term downward channel. Critically, the cryptocurrency’s price recently found support at a major demand zone (highlighted in the cerulean color). When a recession materializes, we expect Bitcoin to breach this zone and bounce off the next major one (highlighted in the deep green color). Incidentally, such an eventuality would reflect the historical norm where Bitcoin has carved out a correction of around 80 percent relative to its previous all-time high in each of its major bearish phases since inception. As an illustration, Bitcoin recorded an all-time high of around $69,000 back in 2021. Accordingly, an 80 percent correction would place the bottom for the cryptocurrency at the $13,800 price level – smack in the middle of the deep green demand zone.

This brings us to the crux of the matter. The Atlanta Fed's GDPNow model is now predicting that the US GDP declined by over 2 percent in Q2 2022. Given that the first quarter has already recorded negative growth, the technical definition of a recession will have been met if the Atlanta Fed model’s prediction pans out. Nonetheless, many analysts expect a recession to materialize toward the end of 2022 or early 2023. The best bet for risk assets, including Bitcoin, is for the advent of a recession right now, which would allow for a swift plunge and de-rating, thereby paving the way for a broad-based rebound toward the end of 2022 and into 2023. If, however, the advent of an economic downturn occurs later on, risk assets will remain on the proverbial tenterhooks for the next few months, leading to frequent liquidation waves and much more pain for investors.

Either way, Bitcoin bulls should give up the hope for an immediate rebound and instead focus on the next halving event, currently scheduled for April 2024. As a refresher, the number of Bitcoins that are awarded to miners for authenticating transactions on the blockchain halves every four years. Since this is the only source of supply increase in the Bitcoin ecosystem, the halving event and the associated decline in the rate of supply addition have always heralded potent gains for the world’s largest cryptocurrency.

By the second half of 2023, we likely will have exited a recession, allowing investors to focus on the upcoming halving event. This, in our opinion, would be a much more solid foundation for rip-roaring gains that Bitcoin bulls still expect. Until then, batten down the hatches and hunker down!

The post Amid a Predictable Flood of Obituaries, Bitcoin Bulls Should Write off the Rest of 2022 Along With the First Half of 2023 and Pin Their Hopes on the Next Halving Event by Rohail Saleem appeared first on Wccftech.