After almost a decade of development, Ampere will be releasing the AmpereOne high-performance server CPU later this year, which uses Arm-based server technology. Arm's partners, Marvell and Amazon, utilize Arm's server architecture for their cloud servers. In tandem with Ampere's release, Huawei HiSilicon has released the Kunpeng server series, based on the Neoverse N1 design, to establish the world's first cloud-native server processor that displays the benefit of extreme performance and power consumption.

During Ampere's annual update covering the company's future and the remainder of this year's business plan, the company revealed that it would release a core 5nm AmpereOne processor later this year.

AmpereOne is also based on the ARM ISA. Customers expect higher performance, better energy efficiency, and better scalability of CPUs every year. Developing and launching self-developed core CPUs can help us focus all our attention and focus on the needs of our customers and meet their corresponding requirements.

— Jeff Wittich, chief product officer of Ampere Computing, in an interview with Leifeng.com

The company intends to advance the processor's power consumption and performance for the new server CPU, especially after being identified as one of the seven largest data center customers globally — a list includes Alibaba Cloud, Microsoft Azure, and Tencent Cloud.

This advancement is an excellent sign for Arm, as the company will open the server CPU space even further between the company's technology and x86 server processors. Ampere's processor is triple the performance of standard x86 CPUs, while the ratio of performance to power is four times improved. The Ampere Altra CPU series uses half the power of x86 server processors while providing 200% better performance. The main contributor to Altra's high performance is the CPU's heightened core count.

Our 128-core product is now the industry leader, twice as fast as other CPUs. Only a single thread runs on each core and keeps all cores running at a consistent high frequency. Provides a large-capacity low-latency dedicated cache, and uses an intelligent high-bandwidth Mesh interconnect structure to connect all high-performance cores together, breaking the traditional CPU usage bottleneck that produces diminishing returns when demand increases. It also uses advanced DDR and PCIe technology designed to achieve maximum capacity, and expand the bandwidth of memory and I/O. It can effectively avoid mutual interference between users, while providing excellent scalable performance, and ultimately achieve maximum utilization.

Ampere Altra series is constructed solely for cloud computing. Ampere has intentionally removed features usually seen with their processors to improve power consumption and area to achieve a single-core power consumption more inferior than standard CPUs by 67% or more. 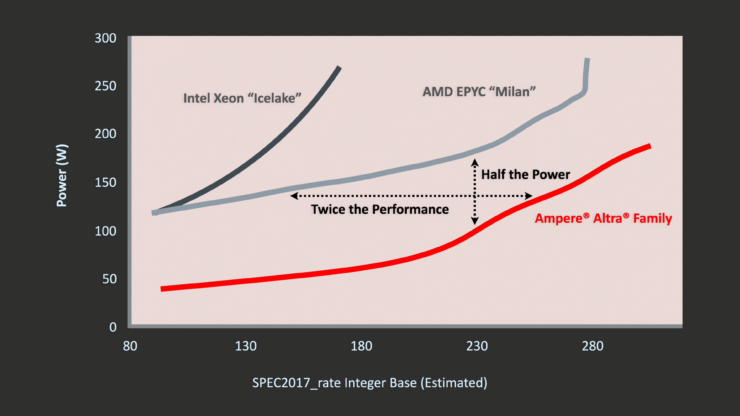 One of the biggest disadvantages of traditional x86 is that they are not specially designed for data centers, nor for cloud and cloud services. They were used in data centers in the past because there were no better options than x86 CPUs at that time.

Cloud-native processors are a huge advantage. They typically have higher core counts, with each core only running on an individual thread, allowing for more security and higher performance without sacrificing heightened pressure and workloads.

Our upcoming self-developed core AmpereOne is also based on Arm ISA. The microarchitecture is very different from the Neoverse provided by Arm, but we can't provide too much information yet. The self-developed core AmpereOne can be perfect It is compatible with our current products Altra and Altra Max cloud-native processors. From the user's point of view, what they have optimized for Ampere Altra/ Altra Max can also be perfectly applicable on our AmpereOne. Besides, We've also worked accordingly with compilers such as GCC and LLVM to further ensure compatibility across all of our products. 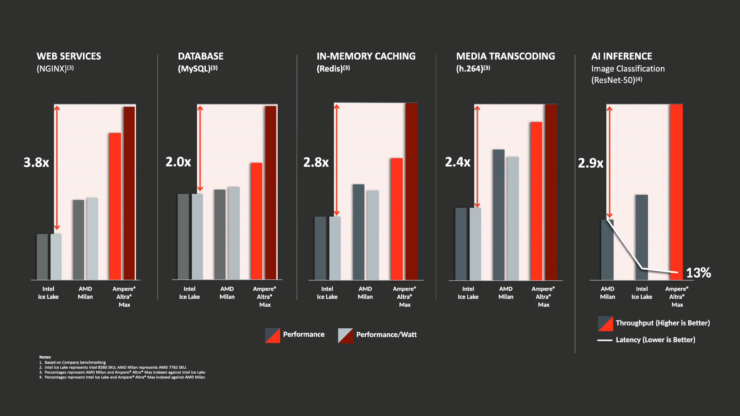 Arm's high-performance processors have a glaring downfall — the software ecosystem. Hardware and software require improvements all the time to enhance the Arm ecosystem. In addition to cooperating with cloud platforms and hardware ODMs and OEMs, Ampere collaborates with Gigabyte and ADLINK to design expansion kits for AI and automated vehicles and other products to extend various applications.

We have applied for hundreds of patents on the performance and functions of our products. The latest product, AmpereOne, uses Ampere Computing's self-developed core, is based on the 5nm process, and supports PCIgen5 and DDR5. The new product has begun to send samples. , very much looking forward to customer feedback.

Ampere is looking into more areas, including their CPUs. Still, the company is also looking into hybrid quantum computing for future use, which several other companies, including Intel, AMD, NVIDIA, and Meta, have also looked into advancing. Ampere will use its Developer Program to offer over 130 applications to developers, ranging from AI inference solutions to advanced cloud databases.

Statista forecasts that the market scope of Arm-based data centers and cloud CPUs will reach $58 billion by the year 2028, which is fourteen times more than in 2019, along with the market percentage will increase twenty percent from three years ago. However, Arm is still working toward the data center cloud market, so it will take some time for them to reach that goal finally.