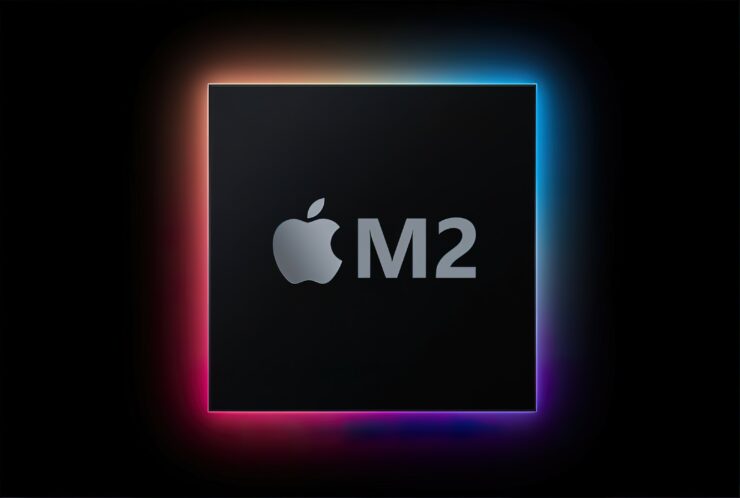 Apple Claims Its Next-Gen M2 SOC Is 90% Faster Than 10 Core Intel Alder Lake at Half The Power, Similar Performance As 12 Core Chip at Quarter The Power

It's been only a few hours since Apple revealed its M2 SOC and several MacBook designs that make use of the new chip. To give a quick recap, the Apple M2 SOC is based on an optimized 5nm node & it is claimed to be a second-generation node, consisting of 20 Billion transistors. This is a 25 percent increase over the M1 SOC. The die size has also seen a small increase and we now have a chip with 10 cores versus 8 on the previous M1. That's also a 25 percent increase over its predecessors. It is not clear if the cores are split evenly (5 P-Cores + 5 E-Cores) or if we are looking at a different config but based on the die shot, we can see five P-Cores. 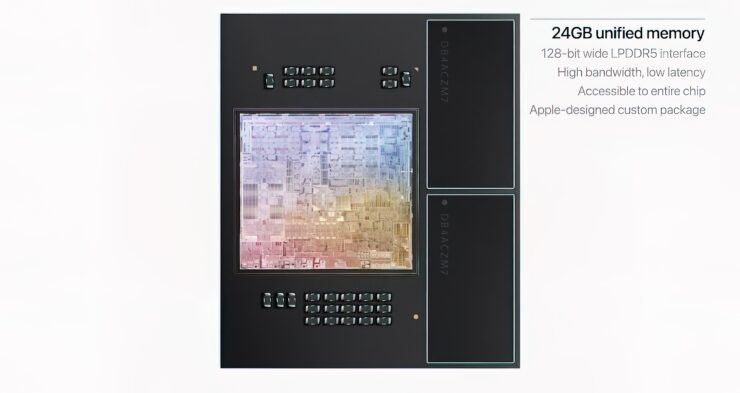 The new Apple M2 SOC makes use of brand new Performance and Efficiency cores with a larger cache, offering up to 18% faster multi-threaded performance versus M1. The SOC also gets 24 GB of LPDDR5 memory which acts as unified memory. This is a feature on the same package as the M2 SOC and consists of two 12 GB (128-bit wide) LPDDR5 DRAM chips for up to 50% higher bandwidth (100 GB/s).

An upgraded Neural Engine offers 40% higher performance with its 16-core design and up to 15.8 trillion operations per second. The GPU on the Apple M2 SOC has also been upgraded by 10 cores, a 25 percent increase over the M1, and features a larger L2 cache which when combined with the higher bandwidth, offers up to 35% better performance. The GPU offers 111 GTexels/s & 55 GPixels per second throughput. 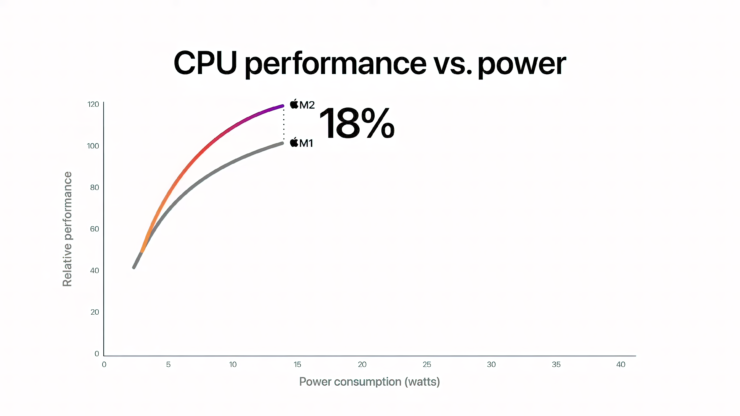 Nearly all of the performance measured for the Apple M2 SOC are within multi-threaded workloads so the company has yet to show us single-threaded or more importantly, the IPC gains for its next-gen SOC.

The new CPU features faster performance cores paired with a larger cache, while the efficiency cores have been significantly enhanced for even greater performance gains. Together, they deliver 18 percent greater multithreaded performance than M1, so M2 can rip through CPU-intensive tasks using very little power, like creating music with layers of effects or applying complex filters to photos.

Compared with the latest 10-core PC laptop chip, the CPU in M2 provides nearly twice the performance at the same power level. And, M2 delivers the peak performance of the PC chip while using just a quarter of the power.2 When compared to the latest 12-core PC laptop chip — which needs dramatically more power to deliver an increase in performance and is therefore found in thicker, hotter, more noisy systems with less battery life — M2 provides nearly 90 percent of the peak performance of the 12-core chip while using just one-fourth the power.

Moving over to the GPU benchmarks, Apple claims that the M2 SOC offers a 35% performance boost over the M1. They once again used the same Intel 10-Core Alder Lake chip and used its integrated Iris Xe GPU for comparisons. The M2 offers a 2.3x increase in performance at 1/5th the power draw.

M2 also features Apple’s next-generation GPU with up to 10 cores — two more than M1. Combined with a larger cache and higher memory bandwidth, the 10-core GPU delivers a big boost in graphics performance, bringing up to 25 percent higher graphics performance than M1 at the same power level, and up to 35 percent better performance at its max power.

Compared with the integrated graphics of the latest PC laptop chip, the GPU in M2 delivers 2.3x faster performance at the same power level, and matches its peak performance using a fifth of the power. The higher performance per watt from M2 enables systems to have exceptional battery life, and run cool and quietly, even when playing graphics-intensive games or editing massive RAW images.

That's a pretty good increase going from M1 to M2 but we should consider the fact that Apple's own benchmarks aren't that much indicative of real-world performance. We've seen their previous claims being shattered in independent tests so one should be cautious of believing these benchmarks and wait for actual tests from independent reviews to be available before you land a decision to get a new M2-powered Macbook.