Apple Pay Later Will Be Limited to up to $1,000, Preventing Customers From Ordering Top-End Hardware 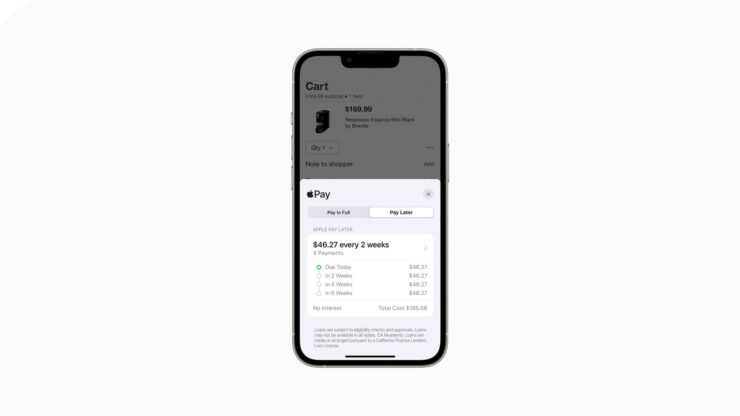 The Apple Pay Later announcement was a sigh of relief for customers that wanted to purchase top-tier hardware but were unable to because of their ludicrous pricing levels. Unfortunately, there are some caveats that Apple has put in place for consumers, irrespective if you have a history of purchasing products belonging to the company’s lineup. Apparently, the service will only allow you to borrow a maximum of $1,000, and that too with some conditions.

The $1,000 Limit Will Also Depend on Your Credit Rating, With Apple Expected to Run Thorough Background Checks

Even if a customer has a terrific credit rating, a report from The Wall Street Journal claims that Apple still intends to limit the borrowed amount to $1,000. The Apple Pay Later feature is expected to arrive when iOS 16 is officially available for compatible devices this fall, and Apple will reportedly run background checks on people through their Apple ID and other sources to see if they are eligible for a specific borrowed amount.

Assuming those customers have a history of payment problems, the Apple Pay Later feature may outright refuse to lend those individuals any sum. Even if you qualify for Apple’s rumored financial limit, it will hardly bring any benefit to the table, seeing as how expensive the majority of products are. For instance, the $1,000 limit will only allow you to purchase the base version of the iPhone 13 Pro or the M1 MacBook Air with an impressive level of internal storage.

As you move to the pricier members of the product family, it will become difficult for customers to acquire those devices and machines without a higher sum being allocated. Then again, it should be noted that Apple will finance its service through its own funds, and even if it has billions in cash reserves, it is not prudent to put money at risk just to facilitate customers.

Apple can increase the $1,000 limit in the future, allowing customers to obtain access to more powerful and pricier goods.

The post Apple Pay Later Will Be Limited to up to $1,000, Preventing Customers From Ordering Top-End Hardware by Omar Sohail appeared first on Wccftech.