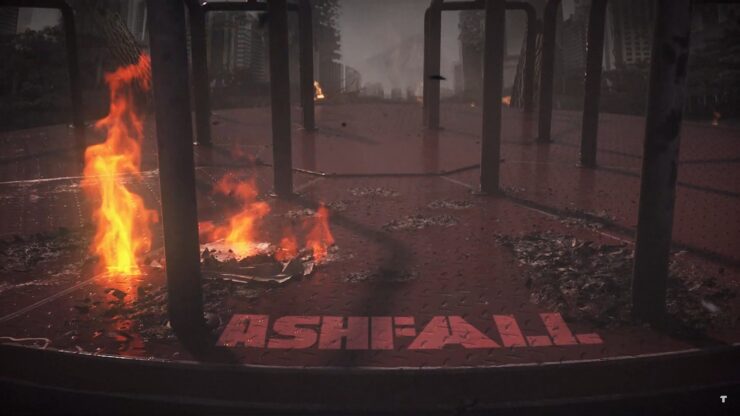 According to the press release, Ashfall is set hundreds of years in the future when the world is ravaged by massive fires and floods due to global warming. Here's an additional blurb we found on Lilithos's official site.

Pacific Northwest, hundreds of years in the future. Global warming has led to massive flooding and fires. The appearances of the Trace – pockets of dark energy – have created havoc with the weather and human lives, decimating entire cities. Civilization has collapsed into local Enclaves where humanity fights to survive..

The game will begin as a 'connected single player adventure' that eventually evolves into a multiplayer PvP and PvE world with Web 3.0 support. Players can reportedly choose to play through the Hedera blockchain network for a build, trade, and sell experience. Lilithos also has transmedia plans and the story of Ashfall will begin with a digital comic written by John Garvin himself featuring cover art by Worldstorm and DC Comics’ Brett Booth.

At Liithos, we want to deliver the next evolution of AAA gaming to the masses in connected ways that have never been experienced before. The gaming industry is amazing in that it has evolved through a series of innovations, never going backwards. We look forward to continuing that trend, working with partners like the HBAR Foundation in support of the Hedera network, who understand the potential and need for innovation without any harmful impact to the environment.

Michael and I have worked together creatively for almost two decades and this is our chance to create something really new and exciting. It’s like getting the band back together. Our goal is to create a truly next-gen, open world experience that engages with new technologies to allow user-generated content. As always, our focus is on creating beloved characters, captivating stories and evolutionary gameplay and a world worth exploring, not just in games, but other media as well.

Alex Russman, VP and Head of the Metaverse Fund at The HBAR Foundation, stated:

The team that Michael has assembled at Liithos represents the top minds in AAA game development and the creation of transmedia IP. As Liithos lead the charge in bringing top-tier gaming into the Web3 era, creating richer and more rewarding experiences for their users, we are pleased to partner with them and support the development of Liithos’ games and ecosystem, both on the Hedera network and within the broader gaming industry.

Check out the Ashfall teaser trailer below.

The post Ashfall Is an Interconnected Open World Game with Web 3.0 Support from ex Sony Veterans by Alessio Palumbo appeared first on Wccftech.