HomeConsumerDDR5 & DDR4 DRAM Prices To Drop By Up To 8% Due...
ConsumerdemandDRAMdropFeaturedHardwareincreaseIndustrymarketNewspricequarterServerStickyTechnology 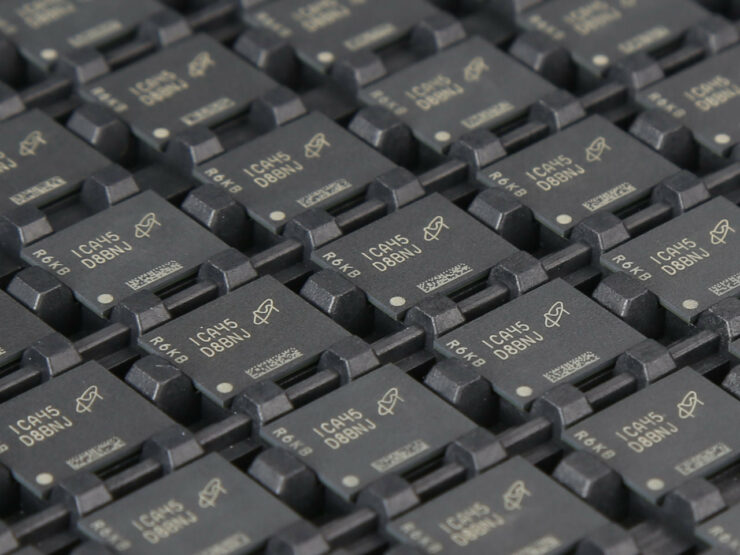 Researchers at TrendForce recently surveyed the DRAM marketplace. Their findings show that DRAM inventory has seen a drop in consumer demand due to inflation, and the current war between Russia and Ukraine. This increase in the stock of DDR5 and DDR4 has caused DRAM prices to drop between three to eight percent as manufacturers, distributors, and sellers are struggling to diminish their supply.

Computer OEMs have met a loss in demand, affecting their annual shipments and increasing their DRAM inventories. During the third quarter of 2022, manufacturers have had to modify and remove  inventories from their operations as they will not see their earnings meeting their expenses. Also, since the suppliers in the markets struggle to reduce the supply, the estimated pricing for the extra collection will drop as far as eight percent in the next half of 2022.

In the breakdown below, it is reported that PC DRAM, which mainly includes DDR4 and DDR5 is going to be down by 3-8% and 0-5%, respectively. 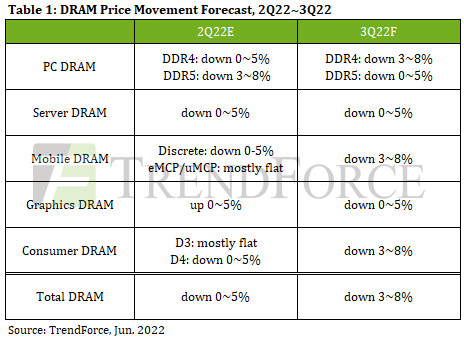 DRAM price movement between Q2 and Q3 of 2022. Source: TrendForce.

The server DRAM markets are not as heavily affected by the consumer PC DRAM market, as the forecasted decline in pricing for quarter three of 2022 will be as high as five percent. Inventory levels of server clients over a seven to eight-week period were minimally high but did not have the same impact on output consumption even though there was an increase in advancements in processing and heightened wafer input. However, mobile and PC DRAMs put consumer markets in flux. With DRAM stock's uncertainty level, suppliers have moved the focus on production capacity to DRAM server markets. Now, suppliers are expected to adapt to newer sales strategies so that they may be able to eliminate declines in pricing.

The mobile DRAM market has forced production each quarter of 2022 due to the sparse consumer market, affecting manufacturers to look at the lowest impact on sales, which is in the server marketplace. The drop in smartphone sales in 2022 by lack of demand and the importance of new and next-gen technology in the market saw a decline of up to eight percent compared to the last quarter. Readers should anticipate the pricing of mobile phones to dip, allowing for better phone options at reasonable prices.

Graphics DRAM markets have had a similar effect to the server DRAM market, as demand dropped by only close to five percent last quarter. Increased volumes of production in Korean manufacturers and the lack of sales of GPUs over the last several months have now allowed for prices to lower, increasing demand. At some point, the lowering cost of GPUs will stabilize and hopefully pick up more needs.

Lastly, DDR3 and DDR4 have maintained a strong selling sector, allowing consumer DRAM markets to preserve their stature this quarter. Still, with the looming recession, costs may rise due to production costs.

The post DDR5 & DDR4 DRAM Prices To Drop By Up To 8% Due To Inflation & Russian-Ukrainian War Crisis by Jason R. Wilson appeared first on Wccftech.