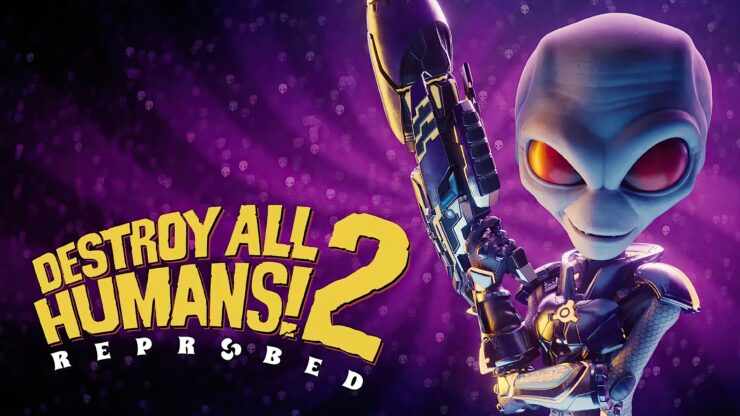 Remember when you were a kid and you saw your friends play a game that you really wanted to play, but you couldn't because your friends always wanted to hog the controller for themselves? Yeah, that's me with Destroy All Humans! Until this point, I knew that the franchise existed and that it was a pretty big deal back when THQ was throwing ideas into the bin to see what stuck. Thanks to THQ Nordic, I was finally able to be the pretentious game owner I always wanted to be and was able to test out Destroy All Humans! 2: ReProbed.

The game throws us into the age of the hippie craze of the year 1969, ten years after the first game. It turns out the Russians were aware of what was happening behind the scenes back when Crypto-137 was making his rounds in America and now the KGB wants to essentially conquer the world and destroy America while restoring the glory of the Soviet Union. Like that'll ever happen, amirite? 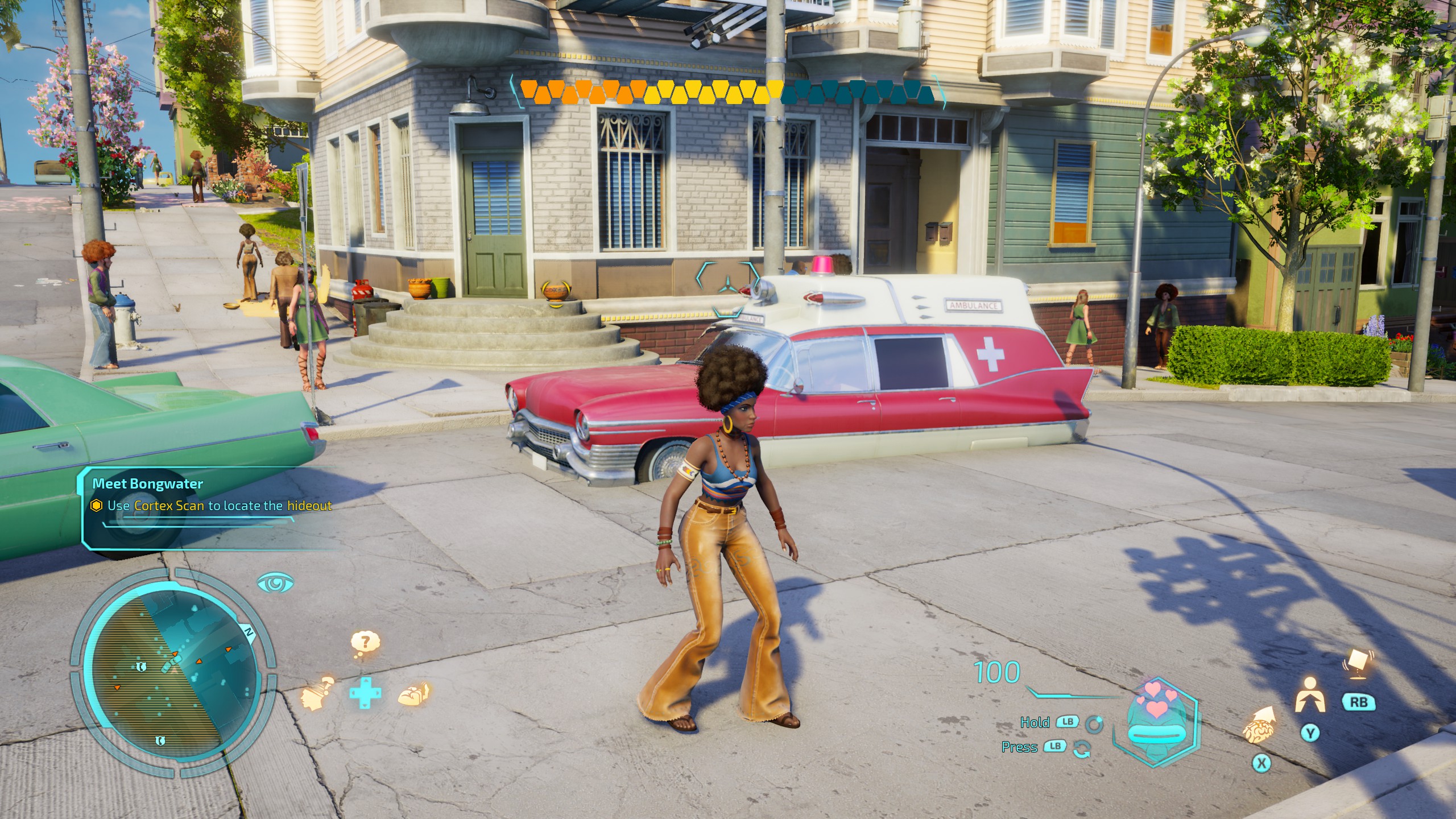 We learn that Crypto-137 died for unknown reasons during a secret meeting. Soon after, the KGB strikes down the alien mothership. This results in the death of Orthopox and leaves Crypto-138 (the clone of 137) with a vendetta against the KGB for pretty much destroying the mothership. Don't worry, though; Pox was able to download his consciousness into a holographic unit and will continue to act as this game's navigator, charged with handing us our missions and telling us where to go next.

Early on, it is revealed that Crypto-138 comes with "The Package" because he's essentially an ayylmao with genitalia. Pox was working on restoring his own package, but that might be a bit hard now that explosions have decommissioned the mothership. So, Crypto-138 is the one who is going to fulfill some alien prophecy and is tasked with finding out how the KGB managed to learn about the Furons while inadvertently uncovering a massive conspiracy that involves a bunch of countries like Britain. 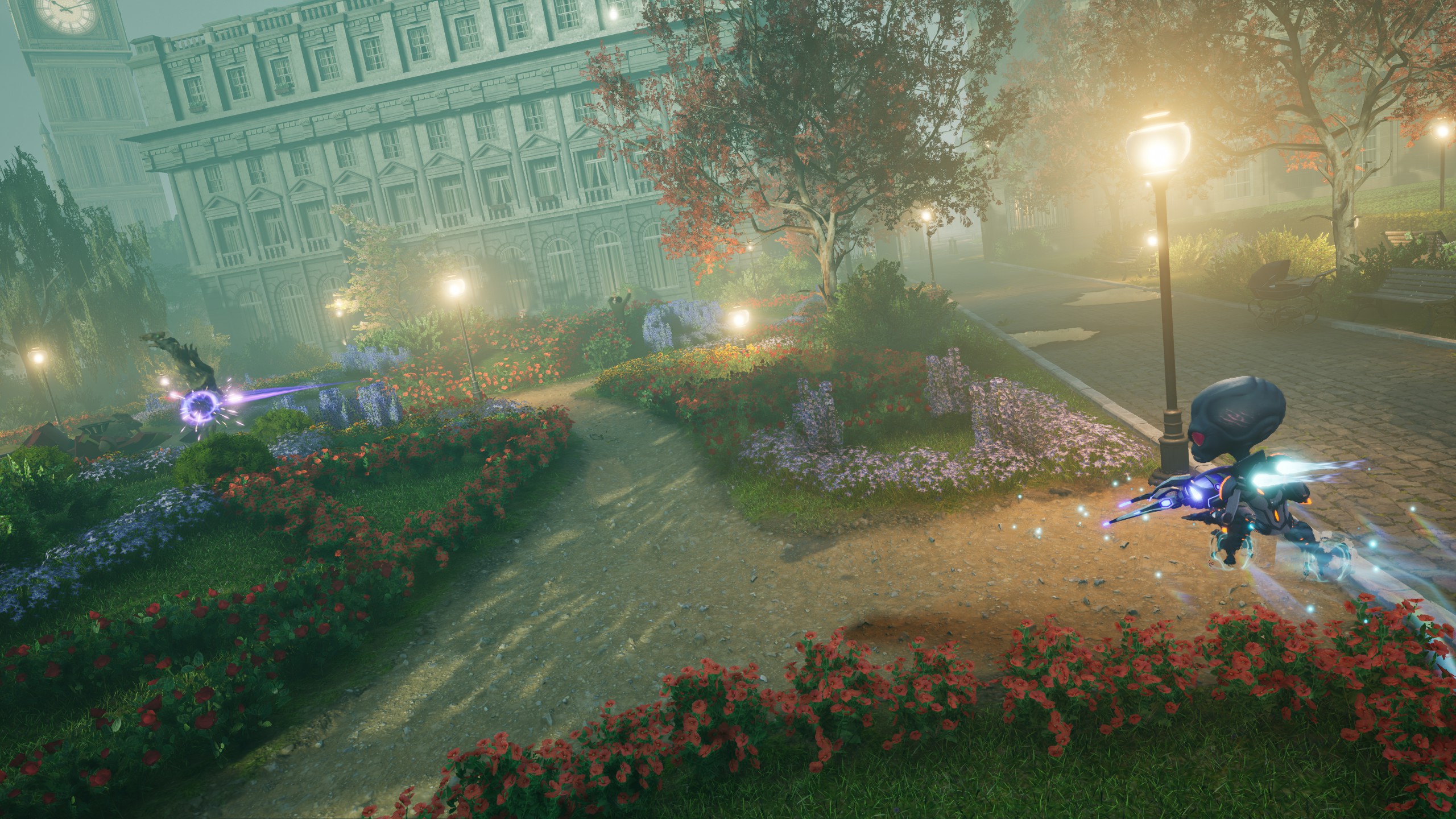 Now, if you're wondering why I am not beating around the bush with the game's themes, it's because Destroy All Humans! 2: ReProbed is just as subtle. In other words, not at all. The game's edgy, raunchy, and offensive. Much like before, the players are also warned that the game's content has been majorly unaltered, and thus, it will be majorly offensive for a lot of modern audiences. Me? I honestly don't give a damn about the game's attempts at humor. Sure, I am not wincing and groaning like most of the audience. But in all honesty, I just find the jokes boring.

They make jokes about early 2000's pop culture, and the main protagonist makes a lot of sexual innuendos and is suaver about things. Sure, I still can chuckle at some of these jokes, but the majority just fall flat or make me wonder who the hell he's even talking about because when the early 2000s was a thing, I wasn't even aware of anything surrounding celebrity culture, I was busy playing Resident Evil 2 on GameCube and getting hyped about Sonic '06 (oh, Ule, you poor idiot).

Destroy All Humans! 2 looks nice graphically, at least. It's just as nice looking as the first game. Everything looks pretty, and the models are detailed, the usual compliments I can make. Unfortunately, I can't say the same regarding its technical prowess. I have found myself with many instances of pop-in during cutscenes. At one point, the game even suffered a massive slowdown when I was turning the camera around. 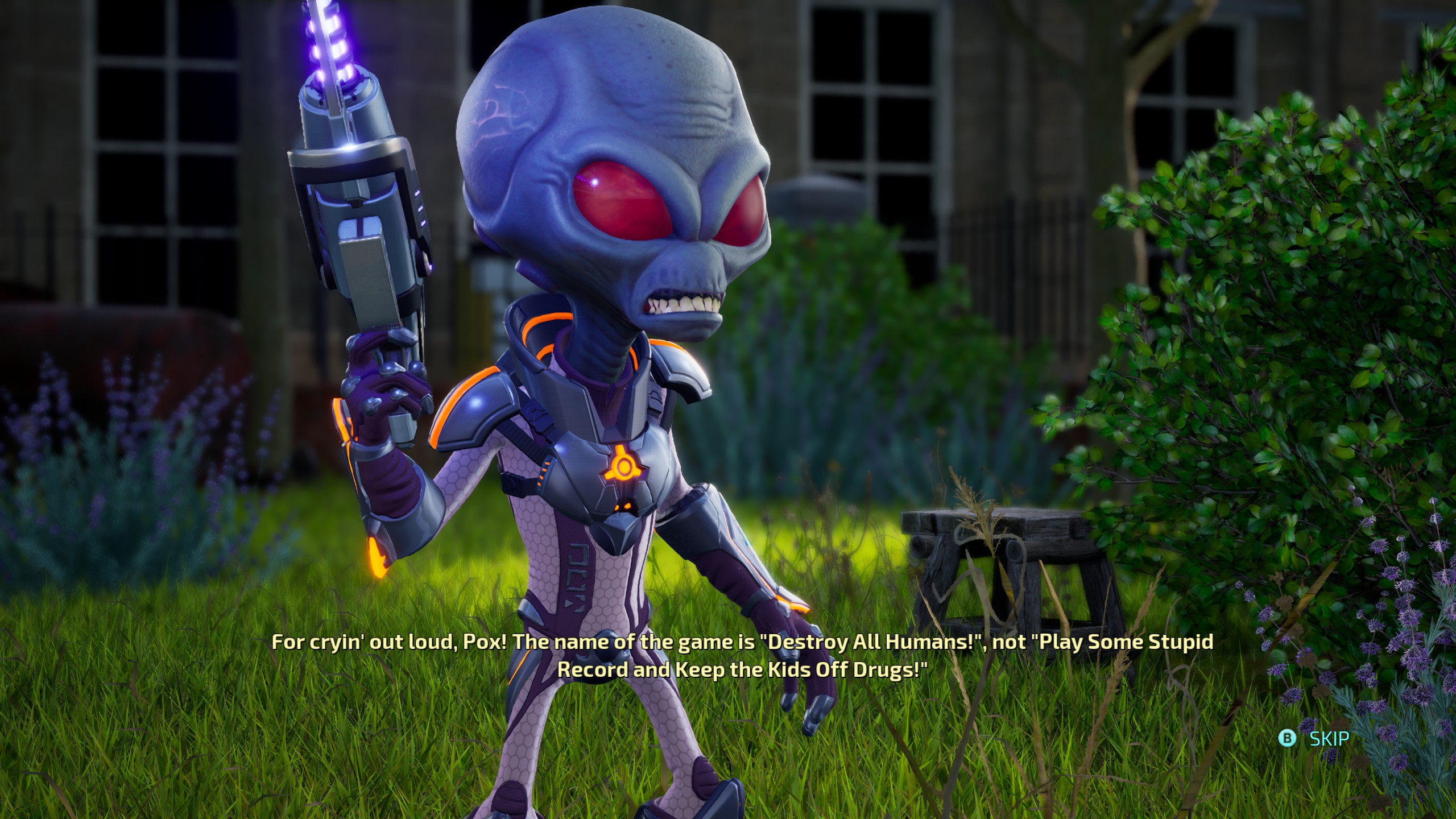 It also doesn't help that a lot of the mechanics still need some work. I mean, it's not normal to see a car running into a sloped area, right? How about having three different vehicles literally merge as they calmly run into each other? I don't really mind because this game loves its jank (many of the weapons involve ragdolls that go ham), so I find this to be part of the game's charm more than anything.

There are also some sound design issues to be concerned about when it comes to this game. Namely in the Britain section, where I had the game's music drown out character voices, which I heavily doubt that was the intention. The game's still in a somewhat late stage of development, so here's hoping most of these issues may be ironed out by the time it comes out. At least nothing game-breaking showed up while I was playing.

Crypto still has access to the weaponry and the PSI stuff he was able to do before. Of course, being a new entry into the series, you also get to use some new weapons. During this preview, I was able to play with one of the new gadgets, the Dislocator. This is a weapon that essentially makes enemies bounce on the floor until they die but needs to be charged in order to do the most damage. The game still brings back weapons like the Zap-O-Matic and the Disintegrator so you still have some familiar stuff to work with.

The game's difficulty is still kind of a joke. I played on the Mercenary difficulty and found myself beating enemies down easily thanks to Crypto-38's versatility. You can still upgrade your character and make him even more of a versatile weapon of mass destruction. One of the upgrades has him perform a shockwave attack if he lands after plummeting from a huge height.

All in all, I honestly think that Destroy All Humans! 2: ReProbed will be more of the same. The best way to summarize is if you enjoyed the first game, you'll find a lot of the new stuff great. If you didn't really enjoy it, there won't be much fun to be had here. But hey, we'll see what THQ Nordic and Black Forest Games will have in store for us later when the game releases on August 30th for PC, PlayStation 5, and Xbox Series S|X.