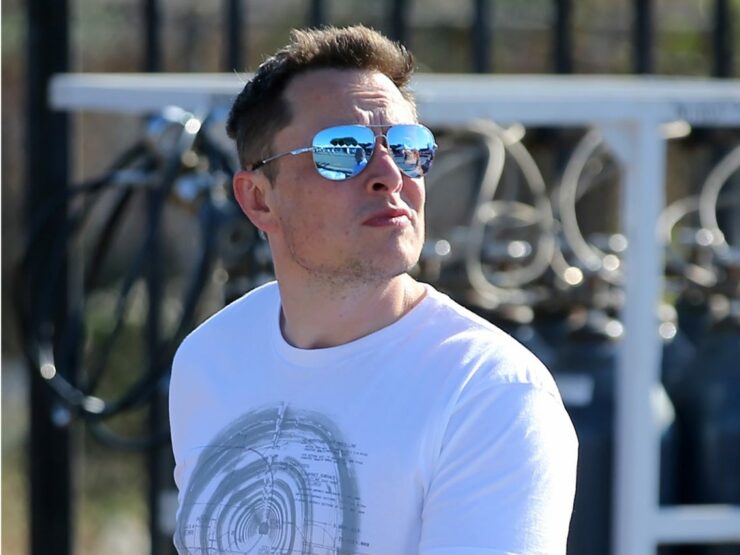 Space Exploration Technologies Corporation's (SpaceX) facilities in Boca Chica, Texas saw a bit of drama on Wednesday when a trespasser entered the area and attempted to speak to the company's chief executive officer Mr. Elon Musk. Musk regularly visits the Texas site where his company is currently developing its Starship next-generation launch vehicle system. SpaceX is busy building and testing prototypes in Boca Chica, and the company has dubbed the site 'Starbase', reflecting its plans to make the facility serve as the hub for its new rocket that the aerospace firm hopes will be the first to take humans to another planet.

The unauthorized entry was reported by the Brownsville Country Sheriff's Office in the evening yesterday, with a press release outlining that the event took place this Wednesday. Details shared by the department revealed that a resident of Philadelphia, Pennsylvania managed to enter Starbase and spent some time in the facilities before being apprehended by SpaceX security.

After being apprehended, she insisted that she was a company employee who wanted to speak with Musk. The security team informed the police about the trespasser and once the police arrived at the scene, events took an unfortunate turn. According to the sheriff's office, the woman not only tried to evade arrest by escaping on foot, but she also assaulted the police officers. All this resulted in three separate charges being levied on her.

The press release was shared by the Sheriff's Office on their Facebook page at roughly noon yesterday local time. SpaceX's facilities in Boca Chica have vastly transformed the once sleepy town, and they are at the center of constant public attention. Local residents saw excitement last year as well when SpaceX started to conduct the first Starship test flights, with one prototype exploding mid-air in a dense fog. 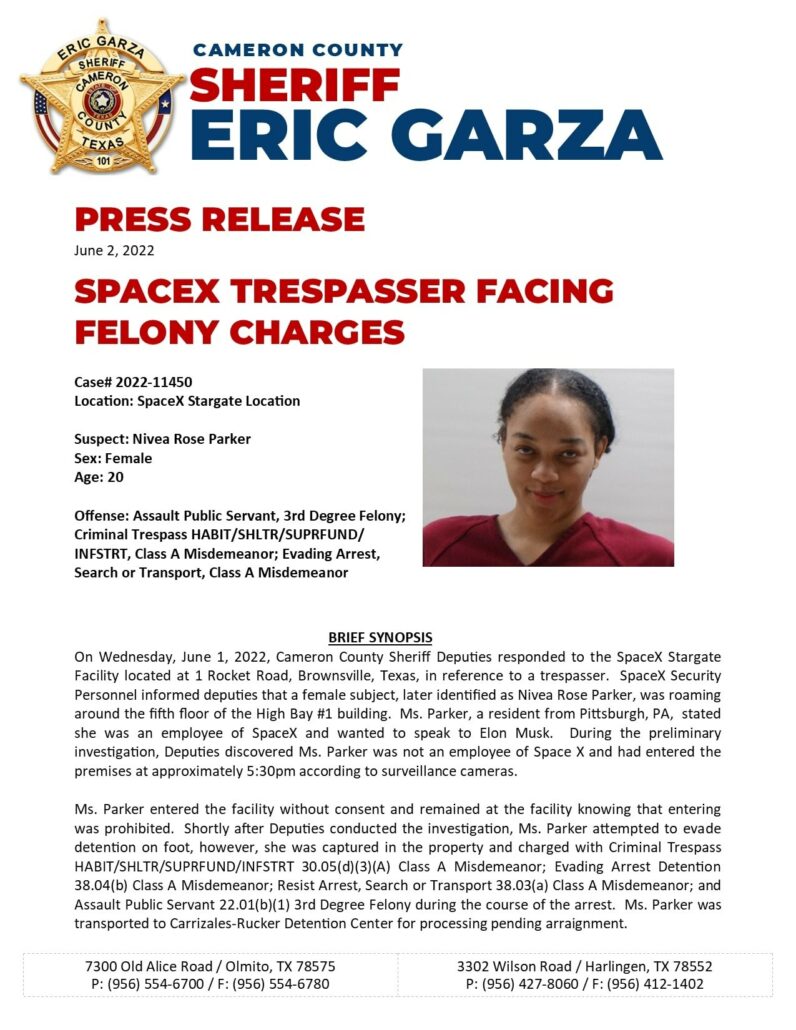 The full text of the release is as follows:

On Wednesday, June 1, 2022, Cameron County Sheriff Deputies responded to the SpaceX Stargate Facility located at 1 Rocket Road, Brownsville, Texas, in reference to a trespasser. SpaceX Security Personnel informed deputies that a female subject, later identified as Nivea Rose Parker, was roaming around the fifth floor of the High Bay # 1 building. Ms. Parker, a resident from Pittsburg, PA stated she was an employee of SpaceX and wanted to speak to Elon Musk. During the preliminary investigation, Deputies discovered Ms. Parker was not an employee of Space X and had entered the premises at approximately 5:30pm according to surveillance cameras.

Ms. Parker entered the facility without consent and remained at the facility knowing that entering was prohibited. Shortly after Deputies conducted the investigation, Ms. Parker attempted to evade detention on foot, however, she was captured in the property and charged with Criminal Trespass HABIT/SHLTR/SUPRFUND/INFSTRT  30.05(d)(3)(A) Class A Misdemeanor; and Assault Public Servant 22.01(b)(1) 3rd Degree Felony during the course of the arrest. Ms. Parker was transported to Carrizales-Rucker Detention Center for processing pending arraignment.

The 265 feet tall High Bay in the press release is the area of Starbase in which SpaceX assembles its 230 feet tall rockets. Starship as a whole system is 394 feet tall, and most of its height comes from the 230 feet first stage Super Heavy booster. This booster is aimed to be equipped with as many as 33 Raptor 2 engines, which in turn will make it the largest rocket in the world both in terms of payload capacity and thrust generated.

SpaceX is currently moving full speed ahead with manufacturing its rocket prototypes, as it heads closer to a crucial decision by the Federal Aviation Administration (FAA) which will decide both the future of Starship and the Boca Chica facilities. The FAA is currently evaluating the site's environmental impact, and if it determines no significant effects, then SpaceX will be able to apply for a test and launch license. This in turn will enable the company to test its new rocket's capability to reach orbit -  a crucial demonstration for every new launch vehicle.