HomeElon MuskElongate’s Massive Payday: These Tesla Put Options Made a Killing as the...
Elon MuskFeaturedFinanceNewsStickyTechnologyTesla

Elongate’s Massive Payday: These Tesla Put Options Made a Killing as the Bombshell Sexual Misconduct Allegations Surfaced Against Elon Musk The CEO of Tesla has always had a knack for controversy, with his innate garrulous nature providing ample fodder for the tabloid-inspired news cycle over the years. However, as Elon Musk juggled a multi-billion-dollar Twitter takeover deal and the fallout from his politically polarizing views recently enunciated with point-blank clarity on the social media platform, this week's bombshell sexual misconduct allegations against the world's richest person may have overwhelmed even the tabloids that thrive on just such upheaval, as the volume of stories, angles, narrative, and the counternarrative transformed into a mind-numbing drone of near-constant sensational commentary.

Alas, one man's loss is another's gain. As Tesla shares plummeted to new year-to-date lows this week, hammered by one development after the other, some holders of Tesla put options earned a massive payday.

The Twitter account @unusual_whales noted an interesting development on Thursday, the 19th of May. Just as Business Insider's bombshell report was beginning to circulate among the masses, some investors were loading up on specific out-of-the-money put options on Tesla.

This bet paid off massively the next day. To wit, the put options on Tesla with a strike price of $650 and expiring on the 20th of May 2022 recorded a gain of around 2,000 percent before expiring. As an illustration, these options were trading at a sub-$1 price early on Friday. However, a little after 12:30 p.m. ET on Friday, these contracts entered in-the-money territory, leading to an explosive price action that saw these contracts trading as high as nearly $20 before expiration. This means that some investors recorded a gain of nearly 2,000 percent, provided that they were able to exit this trade at the top. The following chart shows this explosive price action. 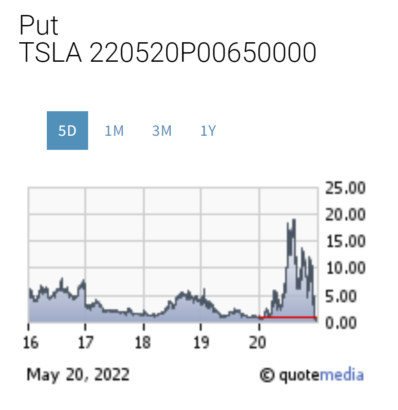 As we mentioned earlier, this week has been all about Elon Musk and Tesla. On the 17th of May, Musk tweeted that he was placing his Twitter takeover deal on hold until the social media giant provided proof to support its internal estimation that total fake accounts on the platform constitute around 5 percent of Twitter's Daily Active Users (DAUs). Thereafter, a Twitter executive was caught on tape personally attacking Musk. On the 18th of May, Musk railed against the decision by the S&P ESG to cut Tesla from its prestigious ESG index. On the same day, the CEO of Tesla announced that he would "vote Republican" in the next elections. On the 19th of May, Twitter’s top lawyer and head of policy, told workers at an all-hands meeting that the company would not engage with Musk in his attempts to drive a more aggressive bargain, claiming that there is “no such thing as a deal on hold.”

Finally, we get to use Elongate as scandal name. It’s kinda perfect.

The CEO of Tesla also said that these attacks should be viewed through a "political lens":

Their implied full name is Business Insider Trading! They just deleted the last word for being too obvious, but it’s true.

Meanwhile, the demand for Tesla put options, as measured by the 30-day implied volatility skew between 25-delta puts and calls, is currently near the highest level so far in 2022. In fact, on the 12th of May, this measure had formed a new 1-year high:

How do you think these back-to-back developments will affect Tesla's share price in the medium-term? Let us know your thoughts in the comments section below.

The post Elongate’s Massive Payday: These Tesla Put Options Made a Killing as the Bombshell Sexual Misconduct Allegations Surfaced Against Elon Musk by Rohail Saleem appeared first on Wccftech.