EVGA revealed its flagship Kingpin RTX 3090 Ti graphics card in April but even though the card was launched, it did not get to see retail availability until now. While the company has had a slow start selling the card, it now appears that the official North American portal is selling the graphics card by bundling it with their top-tier PSU.

EVGA GeForce RTX 3090 Ti KINGPIN Launches For A Retail Price of $2500 US, Comes Bundled With a 1600W SuperNova PSU

The EVGA GeForce RTX 3090 Ti KINGPIN  is unique because it has not one but two PCIe Gen5 16-pin connectors, which is relatively rare on the market. The PCIe connections required for this layout are six 8-pin cables, while the SuperNOVA 1600 P2 power supply includes nine PCIe connectors in this bundle so it should be more than good enough unless you plan on putting the card under some OC action in which case, it can consume up to 1200W of power (GPU-only) using a specialized BIOS that unlocks its full power limit. 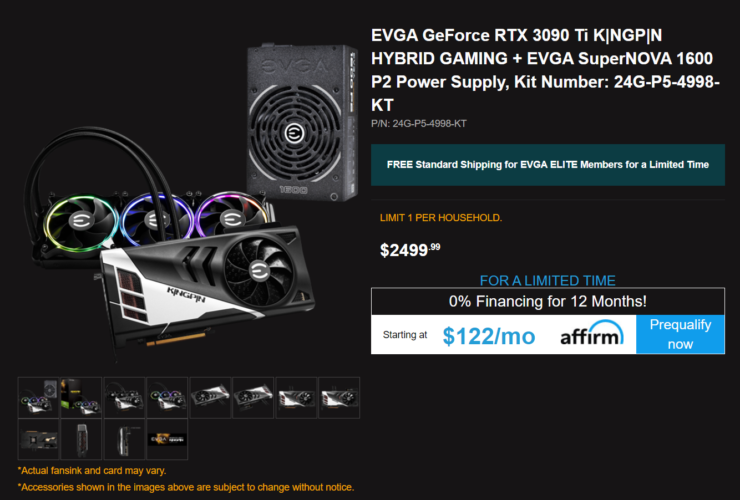 EVGA's GeForce RTX 3090 Ti Kingpin graphics card offers a cultivated cooling unit that is fashioned as a four-fan cooling solution. The Kingpin utilizes a hybrid AIO cooling unit attached to a 360mm external radiator with three fans. The fourth fan is installed directly on the card to allow adequate airflow to spread to the card's VRMs.

Another unique feature of the EVGA Kingpin RTX 3090 Ti is that it also includes an integrated OLED panel that displays information on temperature, voltage, and clocks on the display. The Kingpin is a hefty GPU that offers a custom 14-layer PCB, three BIOS switches for normal, OC, or LN2 settings, and voltage monitoring headers for high-powered overclocking.

EVGA also offers a way to help with cable management, a PowerLink 52u adapter for the dual 16-pin to six 8-pin power cables adapter. Unfortunately, it is unknown if the adapter is included in the bundle or sold separately.