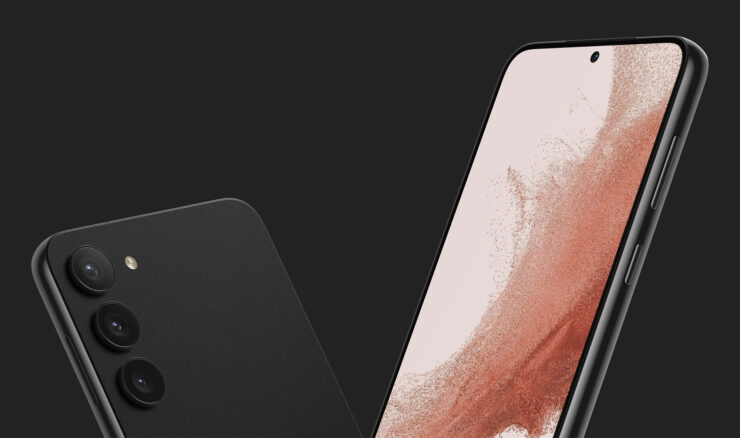 Shortly after the Galaxy S23 renders showed up online, we are here to give our readers a first look at the Galaxy S23 Plus, Samsung’s second flagship for 2023 that will find its place amongst the base model and the premium Galaxy S23 Ultra.

Renders Show Galaxy S23 Plus Will Have Same Camera Arrangement as Its Predecessor, Dimensions Info Reveal It Will Be Slightly Taller

This time, Smartprix has teamed up with famous Twitter leakster OnLeaks to bring forth the Galaxy S23 Plus renders. There are some subtle design changes compared to the Galaxy S22 Plus, but overall, Samsung is not expected to introduce a monumental cosmetic uplift. As you can see in the renders, the position of the front-facing punch-hole camera remains the same, but it could receive an upgrade when the smartphone officially launches.

As for the rear camera array, each circular model has a separate ring, whereas the flash is sitting flush with Galaxy S23 Plus’ chassis. According to the dimensions shared, the upcoming handset will be slightly taller than the Galaxy S22 Plus, reportedly measuring 157.7 x 76.1 x 7.6mm and sporting a 6.6-inch display. The resolution, panel technology, refresh rate, and other details were not a part of the renders leak, but we are confident that this information will become public knowledge in the coming weeks.

There is a USB-C port at the bottom, and just like the Galaxy S23 renders, we did not spot a physical SIM card tray, which can mean Samsung may launch eSIM-only models next year, at least for U.S.-based customers. If the lack of extensive aesthetic changes bother you, do note that in 2023, the Galaxy S23 family launch will be an all-Snapdragon affair, thanks to the latest partnership that Samsung inked with Qualcomm.

The terms state that the Galaxy S23, Galaxy S23 Plus, and Galaxy S23 Ultra will only ship with Qualcomm’s cutting-edge chipset, which at the time of launch, would be the Snapdragon 8 Gen 2 and it is expected to be mass produced on TSMC’s 4nm node, the same process used to fabricate the A16 Bionic. Unfortunately, pricing details were not a part of the leak either, but we should come across more valuable findings in the near future, so stay tuned.

The post Galaxy S23 Plus Renders Have Broken Cover, Mere Hours After the Galaxy S23 Leak by Omar Sohail appeared first on Wccftech.