Hardspace: Shipbreaker Review – It’s a Hardspace life for us

Work sucks, I know. If it’s not physically demanding, it’s mentally exhausting. Even if you have the easiest, comfiest job position, I can say for certain you’re not being paid enough to do it. And with wage stagnation, an ever-expanding wealth divide, and an apathetic world, it’s only getting worse. Hardspace: Shipbreaker is a game that takes this to one of its most extreme endpoints and makes it so incredibly satisfying.

At the beginning of Hardspace, you get a small glimpse of the future world. Earth is barely habitable while politicians and corporate entities partner together to make sure the worker (you) doesn’t get any say in making it any better. Escaping from this, you sign on as a shipbreaker, a futuristic working class salvager that takes apart old ships from an isolated dry dock orbiting Earth. On the upside, you get to escape from the choking planet and sign on with one of the biggest companies in the world. On the downside, the transportation and insurance you’re forced to take on put you into almost endless debt. Thank God the work is safe and easy then.

It’s not. It is dangerous and increasingly complex as you start picking apart larger and larger vessels. But it’s also so much fun. Shipbreaking is the backbone of this game. Each ship arrives whole, looking authentically dystopian in design, and unlike other games that revolve around destruction, these vessels don’t look blocky or obviously breakable. Instead, you have your trusty cutter to break everything down so it can be pushed into the create bin for recycling. Joints can be dissolved to take a ship apart by its bones, but sometimes the cutting has been more improvised as you pull out components that have been fused together. 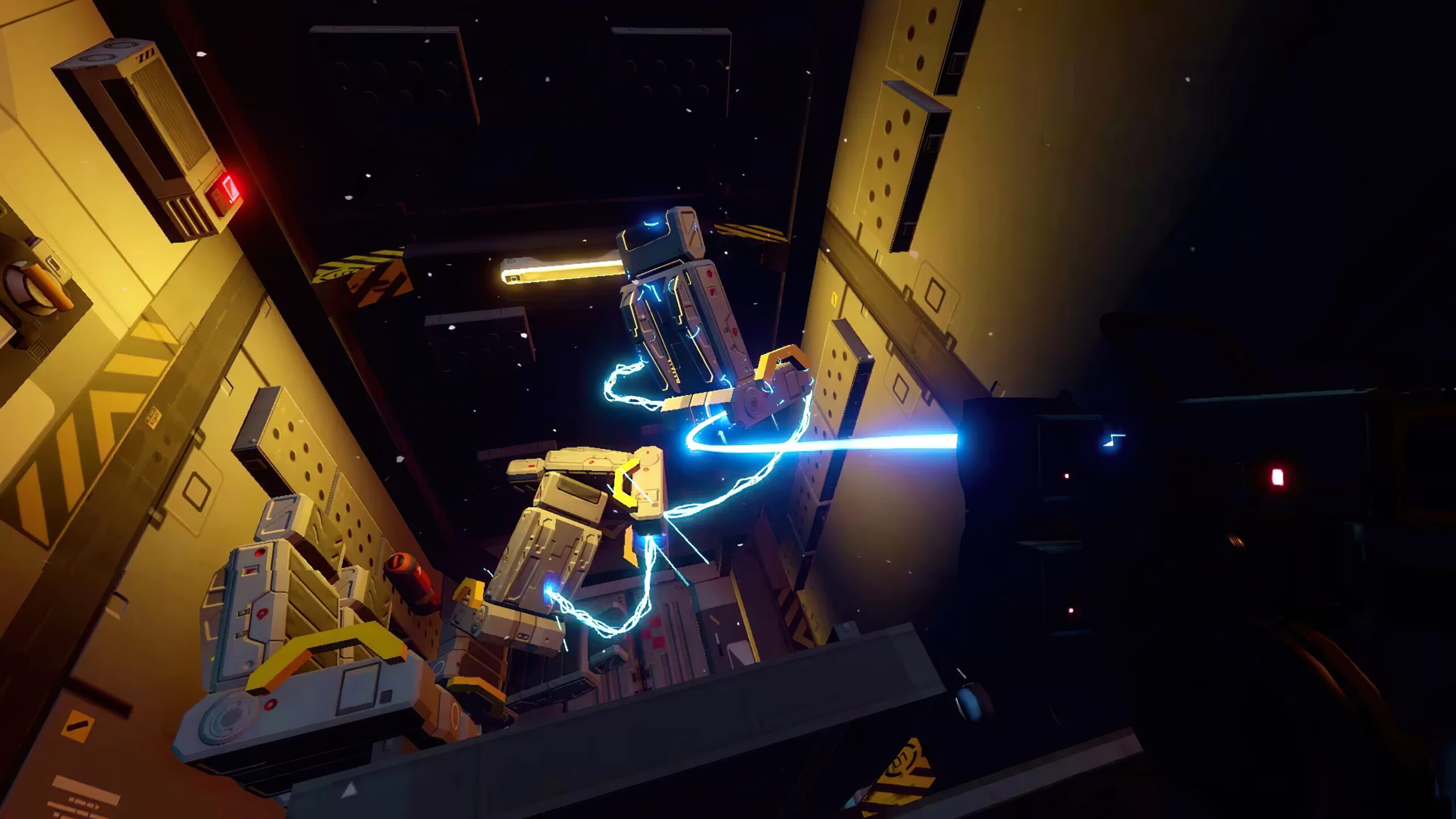 As you progress into increasingly complex ships, you’ll find more challenges and dangers as you strip an old ship of its assets, demanding more attention and care as you go to work. This can include anything from electrical components to fusion reactors that you probably shouldn’t hit with lasers. Starting with a whole ship and taking it apart piece by piece is so much more satisfying than real work where you cannot tell the difference between the start of your shift and the end, except for the hours of your life lost. The controls can be a little tricky to get to grips with, especially if you’re not used to games where you’ll be moving in three directions. Still, soon enough, you’ll be precisely gliding across your dock and organising the severed ships into a regular floating disassembly line. You get other tools, too, although none of this is particularly automated. The tethers, which seem impossible to wield at first, become a lifeline as you begin taking apart massive vessels and heavy equipment.

The company also introduces more obstacles to your shift as well. The early ships can be carefully, patiently taken apart piece by piece, but once qualified, you’ll have to pay for your own air and fuel at the company store, “encouraging” you to work smarter and faster. Alternatively, you can just work wilder and more dangerously. The company store is just far enough away that you have to monitor your vitals yourself, as the journey there and back costs a little bit of air. Everything is designed to cost you just a little, make the company a little more undefeatable, and force you to knuckle under just a little bit more.

Which makes the narrative of Hardspace: Shipbreaker even better. Starting as a lowly recruit, you rise through the ranks step by step, never once getting close to the executive level, but you getting their attention and ire. This is a game about late-stage capitalism, corporate and politician oblivion, and unions, and it’s told very well.

Although it is quite a long game, the variety of ships and configurations make it feel like a pleasant, distracting grind rather than a nasty one. If you’re after a game to recover from the burnout and exhaustion of daily life in the 21st century, Hardspace offers a game that lets you lose yourself in satisfying, procedurally generated puzzles that are the ships that appear in your dock each and every ship. Whether you just want to listen to some ambient country music that calls into mind Firefly and other less problematic science fiction frontier stories, rip apart unique and detailed ships, or want to feel what it’s like to fight a massive company, win or lose, Hardspace: Shipbreaker is a fantastic game worthy of the fifteen hours or so it takes to complete.

The post Hardspace: Shipbreaker Review – It’s a Hardspace life for us by Rosh Kelly appeared first on Wccftech.