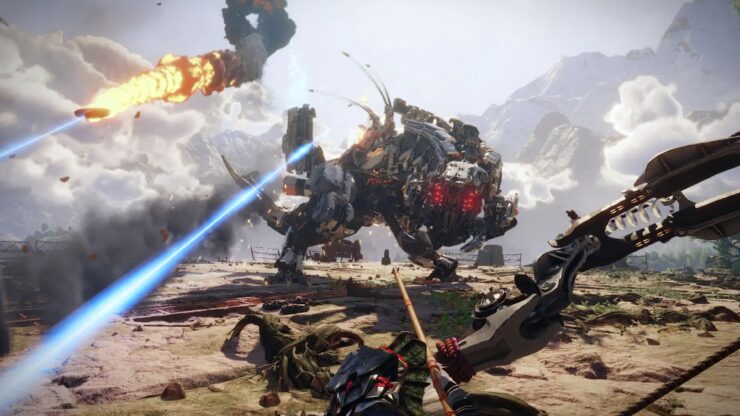 Guerrilla Games was prominently featured during yesterday's State of Play, starting with the debut trailer of PS VR2 exclusive Horizon Call of the Mountain. The game, co-developed with the newly acquired Liverpool studio Firesprite, will feature a brand new protagonist called Ryas.

The world of Horizon is spectacular up close. In Call of the Mountain, you’ll be seeing it through the eyes of Ryas, a former Shadow Carja Warrior who hopes to redeem himself by investigating a grave new threat to the Sundom. He is a master at climbing and archery, two skills crucial to survival as you step into his shoes, scaling perilous mountains and taking down mighty machines like the Thunderjaw.

Throughout your journey, you’ll master various tools and weapons and use the world’s many materials to craft additional gear, equipping you for any situation. But you won’t be going it alone. Along the way, you’ll meet Horizon characters new and old, including Aloy herself.

Alongside the game’s main story, Call of the Mountain will also offer an exciting, immersive River Ride experience. Take a seat and enjoy the gorgeous views of the world of Horizon, but look out; some uninvited machines may try to come aboard! The River Ride is the perfect way for a player using the PS VR2 headset to share the magic of PS VR2 with your friends and family as they watch along on a connected display.

Guerrilla Games also announced the availability of a major free update for Horizon Forbidden West, launched this February on PlayStation 4 and PlayStation 5.

Update 1.14 adds highly requested features like a New Game+ mode, an Ultra Hard difficulty mode, the ability to change the look of the player's equipped outfit to look like any other owned outfit (colloquially known as transmog) and to respec skill points. That's not all, as the developers claimed to have improved their implementation of TAA to improve visual fidelity on the PS5's Performance Mode and PS4 Pro's Rendering Mode.

Guerrilla also said they are working on another Horizon Forbidden West patch that will add VRR support and a 40FPS mode.