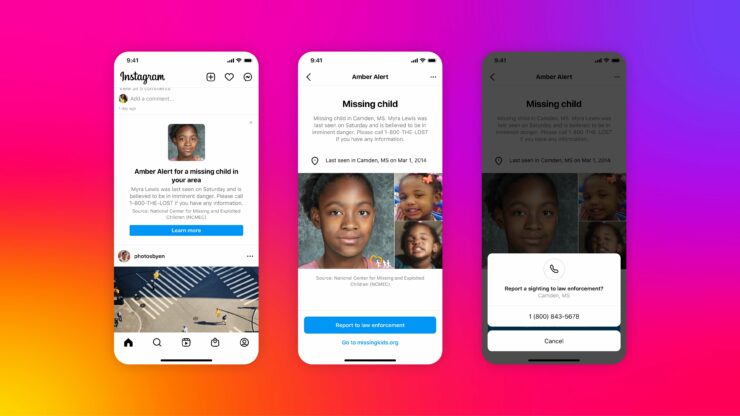 Amber Alert or AMBER alert is a system that notifies public of child abduction. The system was first introduced in the United States back in 1996 and since then it has been adopted in several other countries. Today, Instagram, one of the biggest social media platforms have has decided to launch Amber Alerts on the platform. The inclusion of this feature will allow the public to read and share announcements about missing children in the area.

The Amber Alert service will be available in the United States starting today and will roll out to other countries in the coming week. Instagram has stated that once fully operational, the feature will be available in 25 countries. The feature was developed in partnership with National Center for Missing & Exploited Children, the National Crime Agency in the United Kingdom and several other agencies around the world.

Those in nearby areas will be able to see information such as name, age, photo, and description of the child in question on Instagram. The Amber Alert might also include the location of the abduction, all of these combined can actually allow users to fully utilise the power of social media and spread the news.

Michelle DeLaune, President and CEO at the National Center for Missing & Exploited Children said the following.

Instagram is a platform based on the power of photos, making it a perfect fit for the AMBER Alert program. We know that photos are a critical tool in the search for missing children and by expanding the reach to the Instagram audience, we’ll be able to share photos of missing children with so many more people.

As stated before, Amber Alerts will go live on Instagram starting today in the United States and other countries in the coming week.

You can read more about it here.