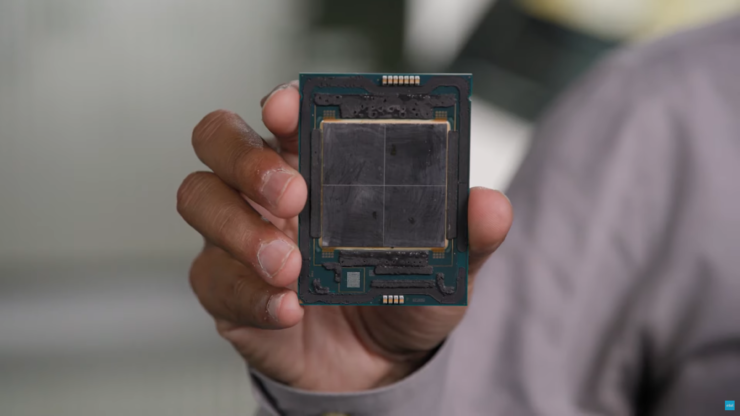 The benchmark that has been discovered by HXL (@9550pro) shows us an engineering sample of the Intel Xeon Platinum 8468, one of the many Sapphire Rapids-SP CPUs. Based on the specs sheet that leaked earlier, the Xeon Platinum 8468 is going to feature 48 cores and 96 threads while using the 10nm ESF process node and the Golden Cove core architecture. The CPU is expected to feature 105 MB of L3 cache &  a 350W TDP. The CPU is listed with 2.1 GHz clocks within Cinebench R23 and 800 MHz within CPU-z which suggests that the clock speeds aren't close to the retail numbers.

The CPU tested is the 6th Stepping and we know from previous reports that the Sapphire Rapids-SP chips have gone through various steppings to fix various bugs that the chips have encountered so far. It is reported that the CPU was tested within two benchmarks, one being Cinebench R23 & the other being V-Ray. The CPU was tested in a dual-socket configuration with 96 cores & 192 threads in total.

Starting with Cinebench R23, the chip scored 90411 points in multi-core and 1351 points in single-core. The CPU is definitely faster than retail EPYC Milan chips in single-core and comparable in the multi-core tests since the top EPYC 7763 scores around 90000-95000 points in the same test. This means that the EPYC 7763 is at best 8.5% faster in multi-threaded performance, a difference that can easily be overcome by final retail clock speeds. The EPYC chip also includes 33% more cores.

Compared to an early ES EPYC Genoa chip, the Intel Xeon Platinum 8468 CPU with 48-cores and 96 threads or 96 cores and 192 threads in total is around 18% slower but once again, the Genoa chip offers 33% more threads. The full potential of EPYC Genoa 96-core chips is limited to 256 threads since that's the maximum thread limit.

We also have V-Ray where the Intel Xeon Platinum 8468 48-Core CPUs are listed in a 4-socket config but it was actually running a 2-socket config. The CPU clock speed is rated a bit higher at 3.0 GHz & the score is rated at 85,766 samples. Following is how the performance compares to other server chips:

Intel has moved the Sapphire Rapids-SP Xeon CPU launch to early 2023 so it looks like they will be competing with EPYC Genoa-X & Bergamo CPUs by the time they are widely available to x86 server customers. This kind of performance would have been competitive a few years back against Milan but with Zen 4 on the horizon, things look grim for Intel despite the major uplift over Ice Lake-SP which now seems too little.