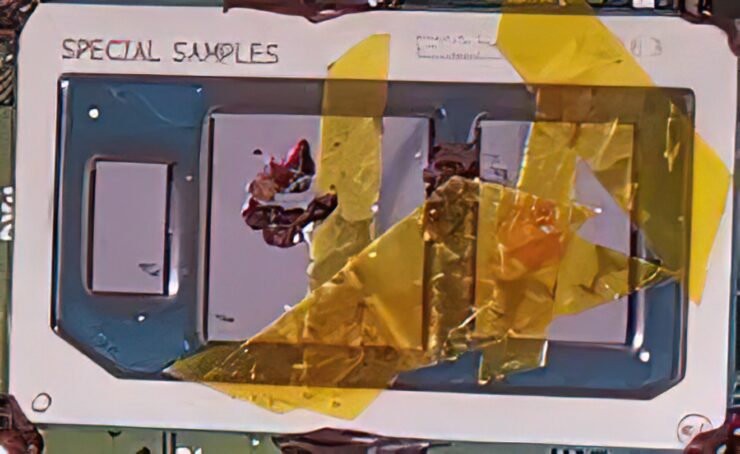 An interesting Intel CPU sample based on the Cannon Lake architecture has appeared online which features a triple-chiplet design. The CPU, which was designed to be a 10nm chip, never made it to the market in this variation but the technology would be extended and we would see Intel adopt a chiplet/hybrid design in its future processors.

Pictures revealed by YuuKi_AnS show that the said SKU is part of a "Special Samples" lineup that is intended for internal use only. Since this specific chip never made it to retail, we can assume that these special chips are not intended for mass marketing but more so for testing and internal test purposes.

The 10nm Cannon Lake lineup was the start of Intel's never-ending delay. The CPU was said to be the first chip to be fabricated on the 10nm process node but owing to several issues related to the yields, the CPU came to market when the industry had moved on. As such, Intel itself tried quickly replacing the family with its Ice Lake and Tiger Lake CPUs in the coming years, which meant that Cannon Lake had a short life.

Now several years later, we might have a glimpse of what Intel was doing with its Cannon Lake 10nm CPU lineup. As per SkyJuice from Angstronomics, the CPU sample picture here is a 3-die MCP (Multi-Chip Processor) which comes in a BGA1392 package and measures 28mmx16.5mm. There are three chiplets on the package, the 10nm CPU die is the largest of the three and measures 70.52 mm2, this is followed by the PCH die which measures 46.17mm2 and lastly, we have the McIVR die which measures 13.72mm2.

The McIVR (Multi-Chip Integrated Voltage Regulator) is supposed to handle voltage regulation across the two chiplets but Intel has since moved back to FIVR and is also considering DLVR for some of their next-generation designs. The leaker has also posted pictures of a reference test motherboard which was only used for internal testing and we can see just how small the 10nm Cannon Lake-Y CPU is. The CPU has lots of thermocouples attached to the front and there is also an exposed spot on the back of the PCB, right under the CPU that can be used to evaluate voltage.

The Intel Cannon Lake-Y 10nm CPU lineup only saw the release of two SKUs, the Core i3-8121U and the M3-8114Y. Both house 2 Palm Cove cores with 4 threads but they were only shipped within a few laptops and NUCs.