The first reviews of Intel's Arc A380 graphics card are in and it looks like Chipzilla's first discrete desktop GPU is turning out to be a disappointment.

The Intel Arc graphics cards were launched at the end of Q1 2022 for the mobility segment & even by the end of Q2 2022, Intel still doesn't seem to have drivers ready for its Arc Alchemist GPU lineup which is the main reason why the latest entry is failing to deliver any decent performance numbers in gaming.

The review comes from, Bilibili content maker, Shenmedounengce, who is the first to post the test results of the Intel Arc A380 graphics card in both synthetic and gaming workloads. The GPU used is the GUNNIR Arc A380 6 GB Photon which was launched recently for a price of 1099 RMB but has been listed at retail outlets for 1499 RMB instead. We also saw some pre-order listings of the card at above $500 US. 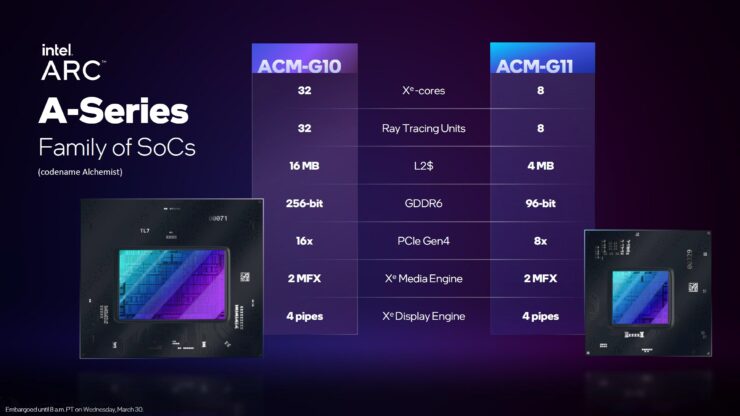 Coming to the specifications, the Intel Arc A380 graphics card will be an entry-level design featuring the full ACM-G11 GPU that utilizes the Alchemist Xe-HPG architecture. It houses the full GPU configuration, making use of 8 Xe-Cores or 1024 ALUs. The graphics card also features 6 GB of GDDR6 memory running at 15.5 Gbps for 186 GB/s of total bandwidth. The TBP is rated at around 75W. The maximum frequency for the card is rated at 2000 MHz which shows that Intel is taking full advantage of TSMC's 6nm process node. The GUNNIR custom model features a clock speed of up to 2450 MHz and has a TBP of 92W.

For gaming, a range of DX11, DX12, and Vulkan titles were used such as League of Legends, GTA 5, PUBG, Shadow of The Tomb Raider, Forza Horizon 5, and Red Dead Redemption 2. In all tests, the Intel Arc A380 graphics card not only ended up slower than the AMD Radeon RX 6400 but also the GeForce GTX 1650 graphics card which is years old now.

Intel had specifically targeted the AMD Radeon RX 6400 in its press release for the Arc A380 where it stated that the new card will offer 25% better performance per Yuan when it launches in Chinese markets but that doesn't seem to be the case at all. Sure the Intel Arc A380 has some cool tricks up its sleeves such as hardware-accelerated ray-tracing, hardware-assisted AI upsampling (XeSS), AV1 encoding/decoding, and better content creation capabilities but at the end of the day, it is a gaming card that fails to deliver any decent gaming numbers.

The hardware configuration consisted of an Intel Alder Lake Core i5-12400 CPU & a B660 board with DDR4 memory for all of the GPUs tested so that isn't the problem. Intel recently made it a requirement to enable Resizable-BAR for optimal performance on Arc graphics cards plus it isn't known if DTT was disabled for these tests. But with every test showcasing similar numbers, we can come to the conclusion that Intel's drivers are a major wreck fest and they really need to fix them fast if they want people to consider Arc a viable competitor in the GPU segment.