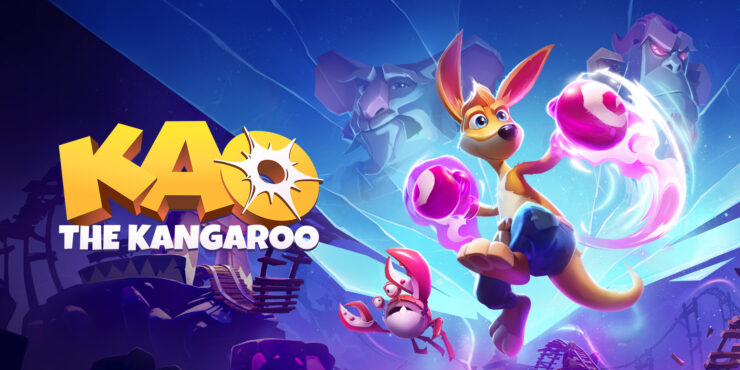 Way back in my younger years, when I was but an innocent child, unaware of the horrors of this world; wrapped up in my safety blanket and sneaking looks at naughty pictures, I was also a fan of a number of the mascot platformers: Spyro the Dragon; Crash the Bandicoot; Gex the Gecko; Croc the Lizard; and, of course, Rayman the dismembered man-thing. That's omitting greats like Ratchet & Clank, which is still one of my favourite series ever. I'd never played Kao the pocket-marsupial; this new release is my first introduction. Does Kao the Kangaroo join the pantheon of the greats?

My brain is telling me not, but that doesn't mean Kao the Kangaroo is bad.

Let me get the first complaints out of the way. When I first started playing Kao the Kangaroo, it was pre-launch. I completed the opening, finished one other area, and then where I moved to next, I got so far, and then the game would crash during a cutscene. No matter how much I reloaded the game, it crashed. I restarted, and it crashed at the very same location. The other issue is that my Switch is a paperweight that gets used when I'm away from home or reviewing a specific game that I'm eager to play, but never any other time. That means my return to Kao the Kangaroo came later, thus the later review. Still, it gave the developer time to fix the most game-breaking bugs.

Other more minor bugs are still around. I've noticed some texture pop in. I've been caught on the scenery once or twice, requiring me to go back to the last checkpoint. The camera can also have a bit of a mind of its own, though that isn't a bug, just something I don't quite like. Other things that are bugs come in the form of audio, where I've had the game go deathly silent in a cutscene, audio tracks repeating over themselves, and more. While the game-breaking thing may not be happening anymore, other issues are still prominent.

Still, if a game is good, I can forgive such issues, and Kao (pronounced K.O.) does at least some things to make up for the problems. Before we get to the gameplay, let's talk story. Kao the Kangaroo is a series reboot and gets started pretty quickly. Kao is sleeping, his sister Kaia speaks to him in his dream, and he decides that it's not just a dream but her calling out to him. As a result, he decides to venture off to rescue his sister. His mother doesn't argue and has Kao go through a quick second tutorial (the dream features gameplay before the tutorial even happens) with some old thing called Walt.

During this, Kao sees Kaia's spirit again, and she leads him to magical boxing gloves. Only these magic boxing gloves are demonic. Kao's father knew this, as did Walt, his mentor, and buried them. He gives in without an argument rather than telling the stupid Kangaroo to put the demon gloves back. It's not masterful storytelling, but you can expect that from a game for the youngins.

Honestly, with few exceptions, mascot platformers don't have great stories. The genre's focus is solid gameplay, and Kao the Kangaroo doesn't fall flat here. Platforming here is strong, offering a good mixture of puzzles and timed challenges. For example, purple crystals that - once activated, often with a magical boomerang - will bring other ethereal platforms into reality. These are only around for a limited time, so you must plan your route and time well.

Aside from these little puzzles, you've got the genre usuals like platforms that fall apart within moments of touching them, jump pads that will send you higher, and other things that will fire you across the screen. It's nothing you haven't seen in many other platformers before. Even the combat isn't only different from the whirls of Crash or the tail lash of Gex, with Kao letting you button mash your way to success.

It's not that I'm complaining about that, though I'm not going to say it's great. It's accessible, something that I think Kao the Kangaroo is determined to be. Even when you hit the no-go water (you can enter some water, that's the blue water. Other darker, murkier water will kill you), the game will bounce you off, giving you one last chance to hit solid land. Even when Kao decides to link the platforming to the varying powers that Kao's magical gloves can take on, it's still relatively easy. That and there are more than enough extra lives strewn around the game to keep a lemming going.

Speaking of extra lives and how many there are to collect, Kao the Kangaroo has a myriad of collectibles. From letters spelling his name hidden around each level to treasure chests, diamonds, heart pieces, and more. It does mean that the levels offer side-tracks and small hidden areas (check behind waterfalls), so that is a nice little bonus if you like to collect everything.

Kao the Kangaroo isn't a bad game, not by any means. The major letdowns are the bugs and glitches, and I'm usually quite forgiving in that area. On top of that, it doesn't offer any particular challenge. For what it is, though, Kao the Kangaroo isn't bad. It's a decent throwback to a style of game that - beyond the far more action-oriented Ratchet and Clank and The Italian Plumber - hasn't seen many significant releases. I was going to say none, but I remembered Yooka-Laylee while writing this.

Anyway, Kao the Kangaroo is alright, and considering it's cheaper than most new titles, it makes the game a more appealing prospect than not. Like platformers? Give it a go, especially if you can get a deal.