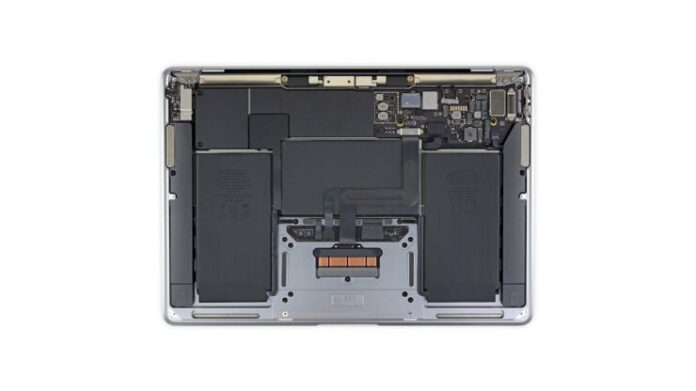 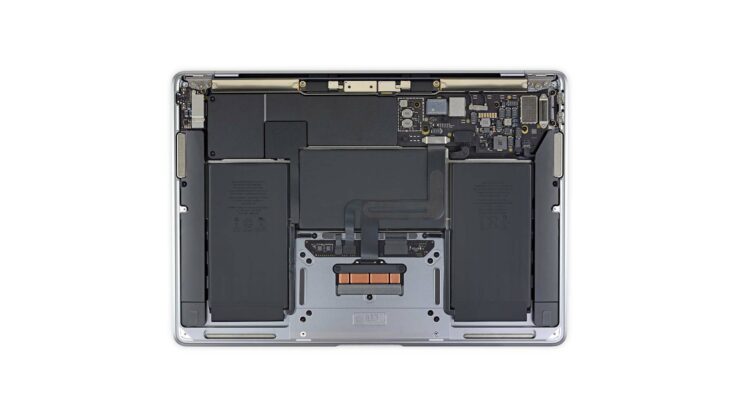 Apple’s M2 MacBook Air will go on sale on July 15, and before we get additional information on this model, a first look at the internals show a stark difference between this machine and the MacBook Pro. For starters, Apple has decided not to include a cooling fan, which is the same approach the company followed with its M1 MacBook Air.

Audio Quality on the M2 MacBook Air Might See a Quality Decrease Thanks to the Newer Design, as Seen in the Latest Images

The image gallery shows the M2 MacBook Air without its rear panel, with 9to5Mac reporting that just like its direct predecessor, the latest portable Mac will ship without a fan. Instead, it has a heatsink covering the SoC and other components, but currently, there is no information on how well this cooling design is for dissipation. To improve cooling slightly, the report states that there is graphite tape covering the large heatsink, but we will see how well this combination performs when the M2 is put under load.

Though the connectors look standard, the speakers are placed in the hinge instead of being present next to the keyboard on the MacBook Pro models. This change may result in an audio downgrade, which is not something consumers would love to see or hear on a product that has seen a massive design shift. Other components include a three-part battery, along with the Force Touch trackpad, which are common on other MacBook models.

The color seen in the images is Midnight, and the report claims that the M2 MacBook Air offers more ‘blue’ on the outside than what is seen in the renders uploaded on Apple’s website and press material. Whether or not this difference is due to the lighting, we will find out when the first wave of hands-on and review content gets uploaded in a couple of days.

What did you think of these changes? Tell us down in the comments.