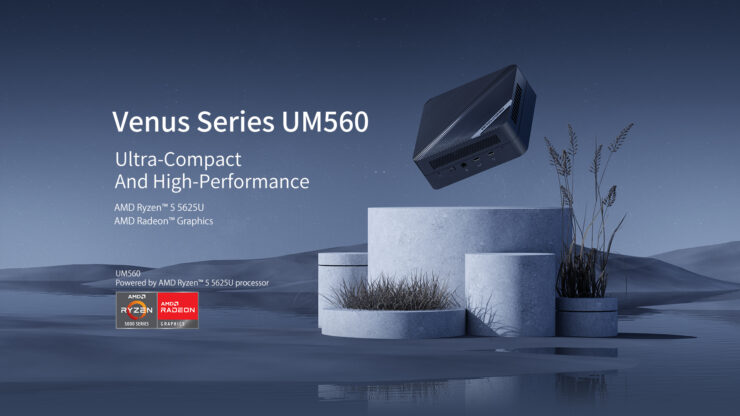 Minisforum has announced the launch of its brand new AMD Barcelo APU-powered UM560 Venus series Mini PC which rocks the Ryzen 5 5625U chip.

Press Release: MINISFORUM today announced their UM560 mini PC, which is listed in their new mini PC series, the Venus series, to provide ultimate performance and work flexibility with AMD Ryzen 5 5625U processor and Radeon Graphics. UM560 is the first AMD mini PC with Alt-Mode USB-C and the world’s first mini PC that comes with a GaN power supply. It is a multi-purpose mini-computer designed for use in a variety of solutions, such as a home office, media center/HTPC, printer management PC, digital signage, or mass-deployment enterprise IT solution. Four monitors can be connected at the same time to the Minisforum UM560 Venus Mini PC using 2xHDMI ports and 2xUSB-C ports. One of the USB-C ports on the back of the computer supports ALT-Mode. Alt-Mode allows USB-C ports to transfer data/video via multiple interfaces, including the increasingly popular DisplayPort video interface. If the monitor support USB PD (USB Power Delivery), users can use this port to power the computer and transfer video signal to the monitor at the same time which makes the whole setup cleaner. The package also includes a 65W GaN power adapter which is small and light. If customers buy it with 256Gb of storage or 512Gb of storage, it will come pre-installed with Windows 11 Pro.