HomeAndroidMotorola is Launching a 200-Megapixel Camera Phone in July
AndroidFeaturedHP1MobileMotorolaNewsSamsungStickyTechnology

Motorola is Launching a 200-Megapixel Camera Phone in July It is not a surprise that Motorola is working on a new flagship that will ship with a 200-megapixel primary camera. The phone is codenamed Frontier and has appeared multiple times in leaks over the past couple of months. Now, the company has finally confirmed the existence of the phone along with some information on the camera.

Motorola is Finally Stepping Into the Flagship Phone Market with Frontier

In a Weibo post today, Motorola China confirmed a Moto phone that will have a 200-megapixel camera and it will launch in July. The teaser given to us does not mention the official name of the phone but it will not be stupid to speculate that it will be called Motorola Frontier.

The teaser is coming shortly after Motorola talked about how it would be launching a phone that will be powered by the new Snapdragon 8 Plus Gen 1 chipset. There were rumors that the Frontier would be powered by the same chipset. Now, putting all the information together, it does not take a lot to figure out that the 200-megapixel smartphone is exactly what Motorola talked about. 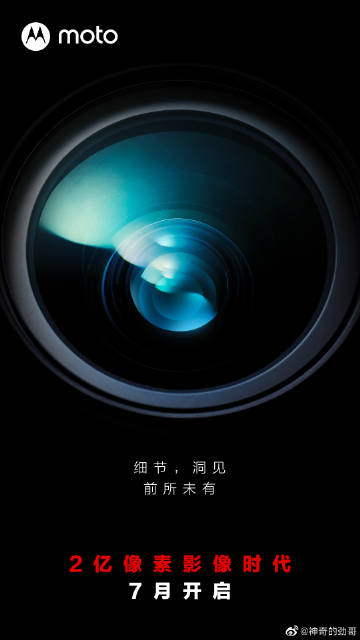 According to the rumors, the Frontier will be a premium smartphone and will bring top-of-the-line hardware including a 6.67-inch curved OLED display with a 144Hz refresh rate. On the back, you can expect a triple-camera setup headlined by a 200-megapixel camera, a 50-megapixel ultra-wide sensor, and a 12-megapixel telephoto lens. The 200-megapixel camera is likely Samsung's HP1 sensor. The phone will also have up to 120W wired and 50W wireless charging.

The Motorola Frontier is set to go official sometime in July, and as we are moving closer, we are more than likely to see new leaks springing up. This will be the company's chance to truly capture the higher-end market, considering how it has been enjoying considerable success in the mid-range, affordable markets.

The post Motorola is Launching a 200-Megapixel Camera Phone in July by Furqan Shahid appeared first on Wccftech.