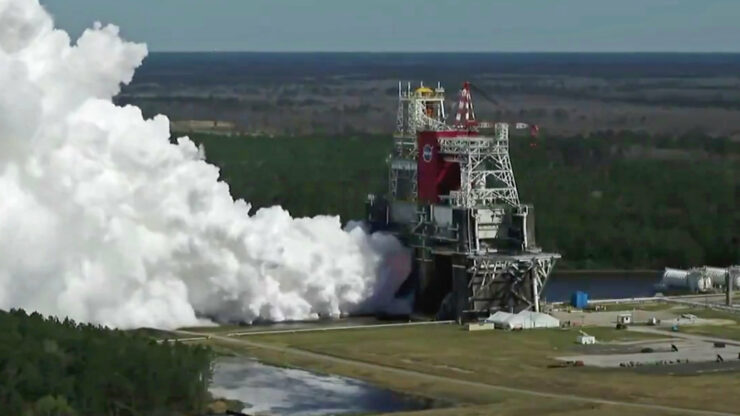 After canceling its launch attempt of the Space Launch System (SLS) on Monday, officials from the National Aeronautics and Space Administration (NASA) shared a new launch date for the mission earlier today. NASA's Artemis 1 mission is slated to kickstart its efforts at developing a lunar presence, and the first flight is now slated to launch on Saturday, September 3rd. The launch was postponed as NASA engineers were unable to successfully cool down the rocket's engines before liftoff, and at a teleconference earlier today, they outlined that the data behind this fault has been gathered and is now being analyzed.

NASA officials also explained some differences between the SLS and the Space Shuttle, and other reasons that might have influenced the event to call off the Monday launch.

During the teleconference, NASA's program manager for the SLS Mr. John Honeycutt explained that the reason engineers did not conduct the crucial engine bleed kickstart test during the rocket's first wet dress rehearsal earlier this year was because of a hydrogen leak. The reasons for this leak were fixed by Monday, and while engineers initially did discover some leaking, the vehicle was fuelled up successfully, which then allowed them to move towards the test that involved flowing hydrogen into the rocket's engines prior to liftoff to cool them down.

This test results in the hydrogen taking the heat away from the engine, with each engine having its own bleed system. The system is similar to the one on the Space Shuttle, however, the key difference between the two is that the after the hydrogen warmed up and took the heat away from the engine, it flowed back into the spaceship's tank. On the other hand, for the SLS, the warm hydrogen instead exits the vehicle through a ground vent.

Mr. Honeycutt explained that the position of the third engine - the one that was likely behind the scrub - is unlikely to have caused the malfunction. He added that NASA is checking the temperature sensors to ensure that they are working correctly and that these sensors "are not flight instrumentation" - instead they were "designed to be development flight instrumentation."

He remained confident that once the hydrogen does start flowing from the launch tower and out from the vents into the ground, the flow of the fuel is satisfactory. Later on, the official added that:

I think you know we understand the physics about how hydrogen performs, and it's not, the way the sensor is behaving, it is not, doesn't line up with the physics of the situation. And so we will be looking at all the other data that we have to use it to make an informed decision of whether or not we got all the engines chilled down or not.

NASA has already tested all these engines at its facilities in Stennis, but these tests saw the engine chill commence earlier, the engines were not intended to be as cold as during the Monday run, and the sensors at Stennis were more sensitive. These are the only differences between the Stennis hot fire run and the Monday launch attempt, and the reason NASA decided to wait for the kickstart test on Monday was that a full hydrogen tank would provide for better conditions for the test. The test stand at Stennis had a smaller hydrogen venting line, and the venting system of the SLS was redesigned after the rocket's green run test.

After the Monday run, NASA now plans to start the bleed test roughly 30 to 45 minutes earlier on Saturday confirmed the Artemis 1 flight director Ms. Charlie Blackwell-Thomspon. The engines of the rocket will be at ambient temperatures on Saturday as well, according to Mr. Honeycutt.

As of now, NASA engineers are evaluating the data gathered from the rocket after Monday's scrub. Even though the launch was scrubbed, they continued to evaluate the vehicle as it remained filled with the super chilled liquid hydrogen and oxygen, and this data is currently being analyzed explained the SLS program manager.

Should the Saturday launch attempt go smoothly, with the weather being the only cause of a delay, then teams will be able to turn around the vehicle within 48 hours. The probability of violation right now is at 60%, but the nature of the clouds makes an exact prediction uncertain.

During the Monday attempt, the engines were targeted to be chilled to a temperature of 40 Rankine - roughly 400 fahrenheit. Mr. Honeycutt explained that engines one, two and four were at roughly -410 Fahrenheit while engine three was around -380 Fahrenheit. An earlier conference saw a NASA official misquote the target temperature to 4 Rankine.

Any potentially faulty sensors will not be replaced for the time being since that will require NASA to miss the launch window. Instead, the agency will try to work within the limits of the data that the sensors are showing. The launch window on Saturday will open at 2:17 PM Eastern Time on Saturday.