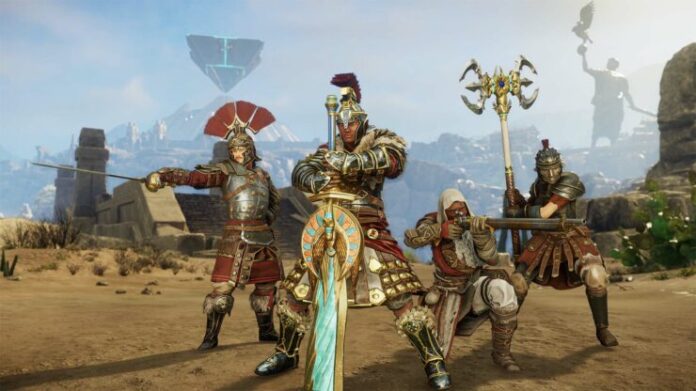 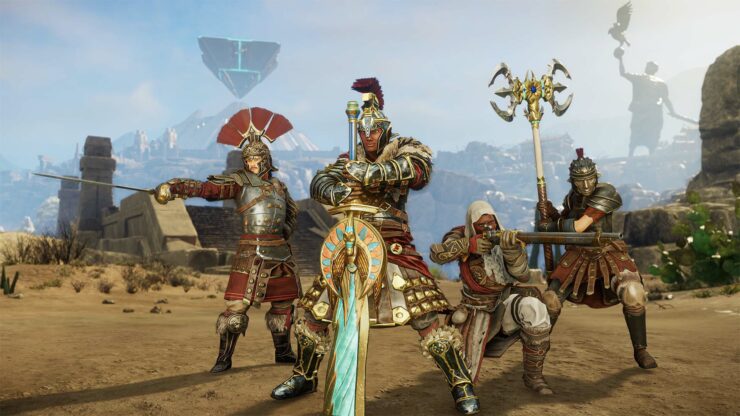 This is the desert-like map that was first discovered through datamining a few months ago. According to the developers, it'll be at least three times as big as any other zone, and it was inspired by ancient Egypt and Rome.

Here's an overview from Amazon:

Death hovers over the scorched wastes of Brimstone Sands, its thirst still unsatisfied even after centuries of strife and war. Here, the ancient Egyptians first encountered the godlike Ancients and built monuments and vast cities that were part of a flourishing civilization thousands of years in the past. Their civilization is now long fallen to ruin, and few of those original inhabitants remain except for the mysterious sorcerer Imhotep, with whom players must work with to solve the desert’s mysteries.
The most immediate threat in Brimstone Sands is posed by the deranged remnants of the Roman Empire's 19th Legion, who came here from Alexandria with Mark Antony and a dying Queen Cleopatra. What exactly befell the Romans must be discovered, but they have fallen to Corruption and now besiege the ancient ruins of a mysterious Pyramid known as Ahket. They are certain that within, they will find the secret to their redemption and the long-awaited resurgence of the Roman Empire.
Players must challenge the Corrupted Legion head-on and delve into Ancient Ruins where they will face vigilant Anubian Guardians and solve hieroglyphic puzzles to achieve new power. Ultimately, they discover a new threat emerging from the sands, a dark plot engineered by their former ally, the Huntress Adiana, and the Angry Earth. It will take everything they have to face her minions and ultimately delve into the heart of Ahket to the mysterious Ennead—our newest expedition.
When the sands settle, players will have explored ancient mysteries with Imhotep, defeated powerful Sand demons, and perhaps, if they persist, restored the rightful ruler who can finally bring order and hope to the region after centuries of chaos.

That's just part of the large Brimstone Sands update, including the Greatsword. This brand new two-handed weapon lets users switch stances depending on the battlefield's situation. The Greatsword scales with both Strength and Dexterity, providing players with flexibility when matching it with another weapon.

Moreover, Amazon is revamping the new player experience. The quest flow has been optimized; new quest dynamics have been introduced to improve questing variety; new characters, enemies, and challenges have been added to various zones, and some town buildings even received aesthetic improvements.

After the brief presentation, we participated in a group Q&A with key developers from Amazon Games on the Brimstone Sands update and beyond.

Any plans to officially support controllers in New World?

No plans right now. We're looking at supporting them in the future.

Will there be any support for existing players to experience the new stories through additional character slots?

We're looking at that, absolutely. There will be a character slot added. It will be on a different server, though, because of PvP.

What's being done to improve endgame replayability and variety in New World?

We will be adding the use of a special. It's not an ultimate like in other games, this is going to be an ability tied to the player. You'll find runes in the world, giving you a special ability that you can fire off on a periodic basis as a support to your other abilities.

Five special abilities will be dropped from the bosses in our five endgame Expeditions. In addition, we did a pass on named items in our loot table, so Tier 2 to Tier IV have been audited to ensure they're pretty powerful for their level. These should be really good drops for players that are leveling. Tier V also had an attributes audit to make sure that they are appropriate for the weapons. For example, if you get a Life Staff, it'll give you +Focus instead of something else it's not related to. Tier V will also drop at 590 or higher Gear Score based on your Expertise.

What was it like designing the Brimstone Sands zone?

We looked at historical figures. If they were to come to Aeternum, what would they do? You can see our interpretations of what happens when these cultures meet in Aeternum.

Are there any plans for larger Expeditions, that is to say, Raid-like dungeons with more players?

That is something we are exploring. Nothing that we can announce right now, but we definitely are hearing people.

The Brimstone Sands also adds the Greatsword weapon. How does it work?

There are two ability trees: Onslaught and Defiance. With the Onslaught tree, you deal more damage but also receive more damage, making it more of a risk versus reward management thing. We also allow players to speed up their heavy attacks at the cost of more stamina. It's pretty aggressive when it comes to usage.

The Defiance tree is about absorbing damage but not dealing out as much, though it's really good when you're facing a lot of enemies as there's a counterattack where you deal more damage depending on how much you take. Certain traits in there also draw aggro, so we're interested in seeing builds where you can be an off-tank or even a full tank using that tree specifically.

Will there be a faction conquest reset with the Brimstone Sands update?

Not right now, we're looking at ways to do that in the future.

Is anything coming for Companies such as housing, activities...?

Nothing that we're ready to announce, but it's something we're starting to think about more earnestly and plan for. I would expect to see some stuff show up next year, but I can't commit to any dates yet.

Will there be more Outpost Rush maps based on the Brimstone Sands theme?

No plans for it. But we are looking at ways to improve Outpost Rush as we know it's one of the most popular modes in New World. We want to improve on it before we start adding other maps.

Are there any plans to make Arenas, Expeditions, or Battlegrounds cross-server?

It's going to take some time, it's not technically easy. When we do it, we want to make sure we get it right. It's something we're definitely looking at, though.

Are you considering server merges or increased player caps on servers?

Right now, we're not looking at merging more servers. We might add a few more, actually. As for the player cap, it's something we're also looking at. I think you'll see an increase either in October or before the end of the year.

Will there be more opportunities to engage in open world PvP with Brimstone Sands?

Currently, we're looking at territory control mechanics and how those influence open world PvP. It's something that the team is deeply exploring, so we want there to be rewards for doing open world PvP combat.

Is there a cadence planned for releasing new Expeditions in the future? Also, will there be endgame versions of the lower level Expeditions at some point?

We love Expeditions, so we think the more we add to the game, the better. We're thinking quarterly, it feels like a good cadence. We're absolutely thinking of the earlier Expeditions and finding ways to bring them into the Mutation system.

Will there be any celebrations for the first anniversary?

There's a couple of things we want to do, yes!

Looking further ahead, will there be level cap increases and/or full-on expansions?

I don't want to go into expansions or anything like that, but it's a safe bet that there will be a level cap increase at some point. We're committed to continuing to work with players and making New World the best game it can be. Part of that is pushing the endgame even further and adding more things to do.

What about updates to housing?

Nothing that we can expand upon right now. There will obviously be new houses in the Brimstone Sands zone. As for other locations, we don't know exactly when that will happen.

The presentation mentioned new activities and events coming with the update. Can you talk about those?

We call them roadside encounters. A lot of time on your path, you might look at different groups of enemies, depending on the time in the world. You might have seen some dust clouds, some rumblings in the video. There's some things that will show up in the desert that you might now expect.

We also put in 26 Glyphs all around Brimstone Stands. These allow you to enter secret passages, unlock elite chests, continue portions of the story, et cetera.

Do you have any more seasonal events scheduled?

We have major events in Summer and Winter, but also some minor ones. In the future we might expand that, but there should be an expectation that we are celebrating holiday events.

Will Brimstone Sands be neutral ground or not?

No, it will be fought over and conquered by player factions.

Are there going to be any changes to other weapons due to the Greatsword?

There will always be balance changes, but not because of the Greatsword itself.