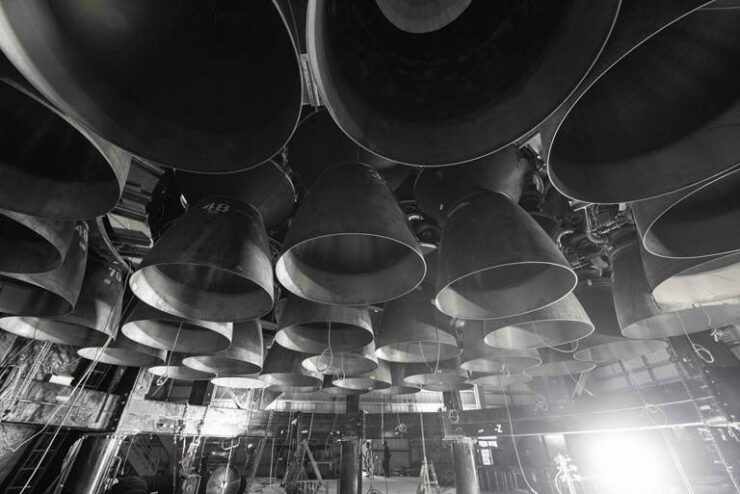 As part of its launch campaign for its Mars rocket, Space Exploration Technologies Corporation (SpaceX) lifted the Super Heavy booster prototype of its Starship next generation rocket with a crane in its testing facilities in Boca Chica, Texas on Friday. As opposed to its Falcon 9 rockets which are assembled before being sent out to the pad, SpaceX plans to lift the two pieces of Starship on the launch pad itself, and to do this, the company has built a large crane structure. Starship's operational profile involves SpaceX landing its boosters on the pad, refurbishing them for flight and then lifting the spaceship on the booster. The Super Heavy booster rolled out to the pad earlier this week, and it is the first prototype that is nearly fully assembled - with many hoping that it will also be the one to make the rocket's maiden launch attempt later this year.

SpaceX's current rocket - the Falcon 9 - uses nine Merlin engines to lift payloads as heavy as 23 tons to low Earth orbit (LEO). With Starship, the company plans to increase this fivefold by using more and larger engines and different materials. While the Falcon 9's Merlin 1D+ engine is capable of generating 221,000 pounds-force (lbf) of thrust, the Raptor 2 engines installed on Starship can push out  510,000 lbf of thrust, more than doubling the amount generated with the Merlin.

Additionally, not only is the Raptor 2 significantly more powerful, but as opposed to the nine engines present on the Falcon 9, the Starship Super Heavy booster has 33 Raptor 2 engines. This in turn lets the rocket aim to deliver as much as 100 tons to LEO, which is nearly five times the Falcon 9's capacity. SpaceX's other rocket, the Falcon Heavy with 27 Merlin engines can fly up to 64 tons to LEO. 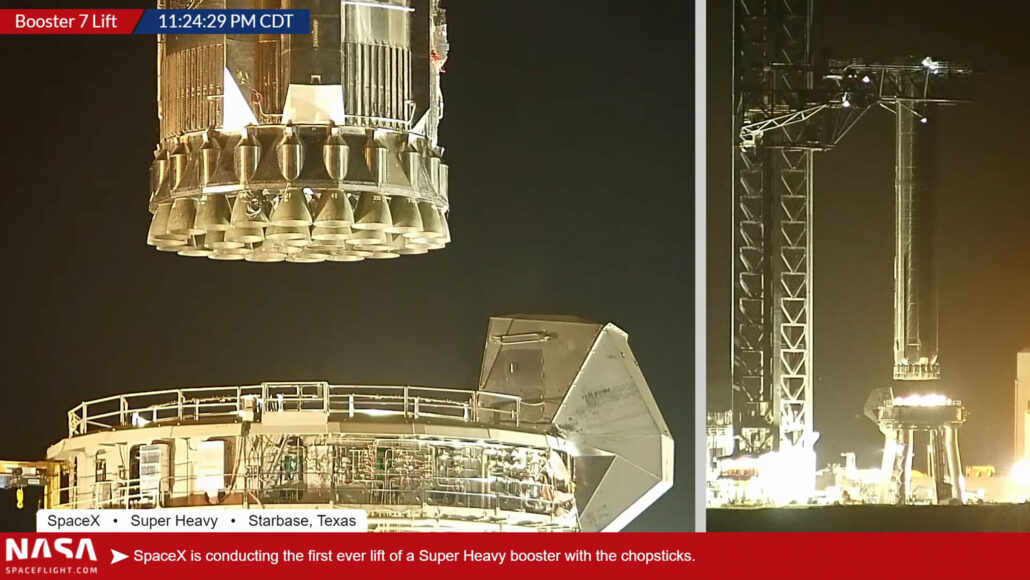 The Super Heavy booster 7 is being lifted off the ground and on to the pad in Boca Chica, Texas on Friday. Image: NASASpaceflight.com

SpaceX rolled out its latest Super Heavy booster to the launch pad in Boca Chica, Texas yesterday soon after which it was lifted by crane on the pad. The booster is 270 feet tall, 30 feet in diameter and is expected to weigh as much as 200 tons according to SpaceX chief Mr. Elon Musk.

Musk's company moved forward in its bid to conduct an orbital test launch of Starship earlier this month as the Federal Aviation Administration (FAA) finished an environmental review of the facilities. Still, while SpaceX can carry out static fire tests of its rockets, which involve testing their engines on the ground along with low altitude flight tests, it will need additional approval from the FAA to launch the vehicles to orbit.

On the topic of static fires, it appears as if SpaceX is moving fast - just as its culture is designed to do. A purported Marine Safety bulletin issued by the United States Coast Guard on Friday (shared on Twitter) informs readers that from June 27th to June 30th, a hazard area will be present around SpaceX's facilities from 10 a.m to 10 p.m. Another copy of the bulletin can be accessed here.

Furthermore, local authorities have also announced road closures for the Boca Chica highway and beach on June 27th and June 28th, for the same time duration.

A static fire test is absolutely crucial for a rocket of Starship's scale. It will make SpaceX comfortable with the complex operations that lead to the fuelling of the rocket, and more importantly, it will also enable the company to check the relevant systems on the booster. A previous, different test had resulted in the fuel pipe of the same booster deforming, following which SpaceX repaired it within weeks.

The post SpaceX Lifts 200 Ton Rocket In Air As It Races To Historic Hot Fire Test  by Ramish Zafar appeared first on Wccftech.