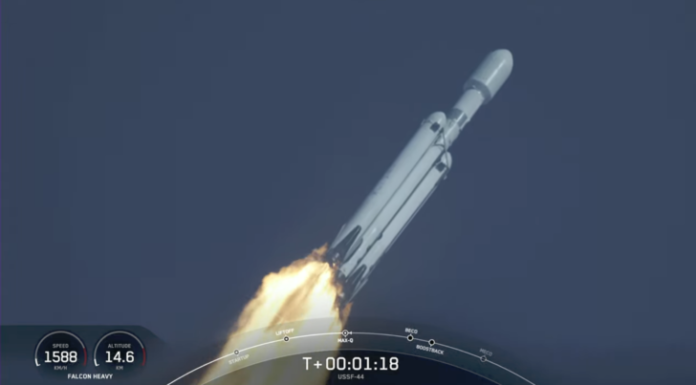 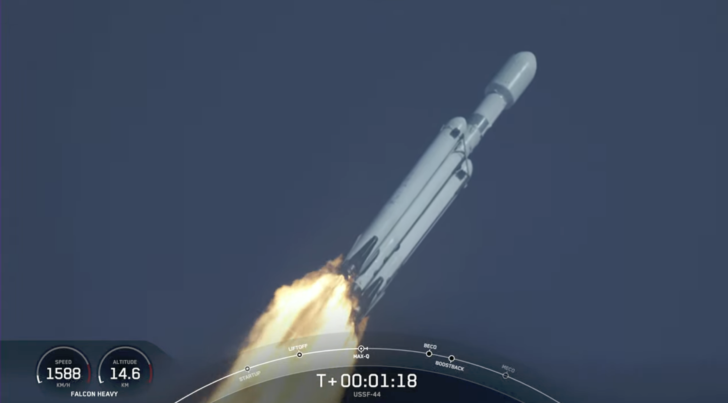 SpaceX launched its first Falcon Heavy mission in three years earlier today from NASA's. Kennedy Space Center in Florida. The launch, which uses three rocket boosters, marked for some spectacular views, as viewers were treated to a rare sight of two rocket boosters landing at the same time. The Falcon Heavy is America's largest rocket in terms of total thrust generated, and the rocket aims to primarily serve the needs of the U.S. national security market. This market was served by the United Launch Alliance (ULA)  before the Falcon Heavy reached its operational status by launching a Tesla and other satellites to orbit.

The launch was SpaceX's 50th launch of the year, and it ensured that the company has launched more than one rocket per week this year. This is part of an aggressive launch cadence which has served primarily to build out SpaceX's Starlink satellite internet constellation.

Roughly three minutes prior to launch, the two side boosters and the primary booster were filled by liquid Oxygen. After liftoff, the two boosters supported flight until roughly two and a half minutes after launch, when  they separated from the primary booster. This boosters is the one with which the satellite, a payload for the U.S. Space Force, was attached, and after the two rockets separated from it, it continued its journey to space.

Views of the booster separation at roughly 5,729 kilometers per hours, were blurred as the fog in Florida led to condensation on the cameras on the side boosters. The booster separation for the Falcon Heavy is different from a Falcon 9 launch, as the rockets for the Heavy have to make sure their engines continue to run as they separate. For the Falcon 9, the first stage engines shut down before separation, and the difference is due to the Falcon 9's booster being located under the second stage while the Heavy's rockets are located at the side of the main rocket.

The blurred views were only temporary as the views shifted over to the ground cameras just as the booster entry burns started. These burns take place after the rockets have separated themselves from the primary boosters and have reoriented themselves in position with the landing sites. It aims to slow them down for a successful landing, and the launch criteria itself determines whether SpaceX can land them.

The rocket landing, as expected, was the most awaited and spectacular event of the day. In addition to being treated to two boosters landing at roughly the same time, the landing also took place on land - for another rare view as most of SpaceX's rockets land on its drone ships out in the sea. Landing at sea ends up saving fuel, since they are closer to the rocket's separation point and as a result the rocket requires less fuel to navigate itself back to the landing site.

The mission also successfully delivered the satellite, as just as the rockets landed, SpaceX's mission controller confirmed that the payload had successfully reached its parking orbit. This is the point at which the spacecraft tests all of its systems before raising itself to the correct destination. The time taken for this depends on the satellite and its target orbit, and since today's mission is classified, we're unlikely to find out what the destination was.

Multiple sonic booms accompanied the rocket's landing , and the pair almost landed in sync on their sites. The zones were landing zone one and zone two, with the first landing zone now having seen 21 rockets land and the second seeing its fourth landing to date, today. The mission marked the 150th and 151st time that a rocket has successfully landed after a mission, and the next Falcon Heavy launch will take place next year.

For full coverage of the launch, check out SpaceX's livestream!