SpaceX Shares Breathtaking Views Of Rocket Cutting Through The Clouds! 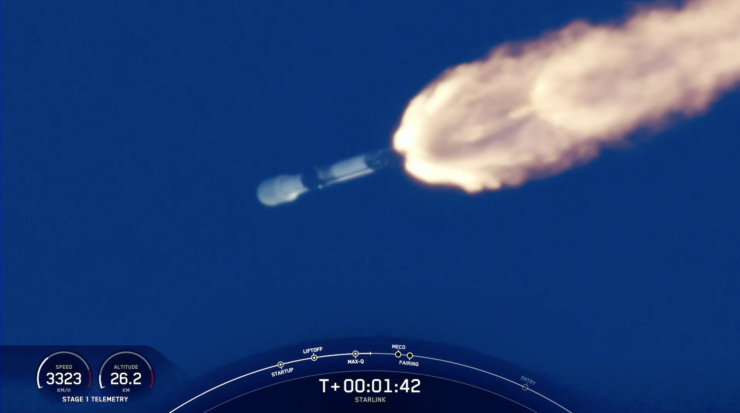 Space Exploration Technologies Corporation (SpaceX) shared breathtaking visuals of its Falcon 9 rocket cutting through clouds as it launched from the Vandenberg Space Force Station yesterday. The launch was for another batch of Starlink satellites, as the company rapidly builds its constellation of small internet satellites in low Earth orbit (LEO). Starlink is the world's largest satellite constellation, and today's launch aimed at placing the spacecraft into polar orbits, in SpaceX's bid to provide internet coverage to remote regions where users find it difficult to access land-based internet connectivity.

The launch, which took place late at night yesterday Eastern Time, was a rare occasion when SpaceX launched its rockets through a dense fog and cloud cover. As compared to the company's launches from the National Aeronautics and Space Administration's (NASA) facilities in Florida which generally have excellent weather and clear skies, the launches from Vandenberg, California sometimes come with a dense fog.

This was the case yesterday as well, with SpaceX's live stream of the event being unable to show the rocket as it stood on the launch site for pre-launch operations. Before launching a Falcon 9, SpaceX fills its rockets with liquid Oxygen and Kerosene, after which the launch arms retract and the rocket's internal computer takes over a minute before liftoff to verify that all of the myriads of systems that are onboard are functioning nominally.

The latest Starlink mission was SpaceX's 167th launch to date and its 29th launch of 2022. Throughout the year, the company has maintained an aggressive cadence, as it aims towards launching one rocket per week on average.

The fog and cloud cover in Vandeberg gave watchers a spectacular show later on after the rocket successfully ignited its 9 Merlin 1D engines and took off to the skies. Within seconds of its launch, the Falcon 9 was shown cutting through the cloud cover to present a clear view of the rocket which stood in sharp contrast to the foggy views from just moments back.

After this, some of the other noticeable visuals for the Falcon 9 included a zoomed in shot that displayed its engines firing in all their glory as they prepared to shut off. A handful of views of the cloud cover in the background were also present, in addition to clear footage from SpaceX's drone ship post landing which in all likelihood is courtesy of Starlink itself. Unfortunately, however, the video of the rocket changed cameras just before its fairings and stages separated, with a previous clip from another launch showing remarkable views of this exact moment in the backdrop of the black night sky. SpaceX plans to further reuse these fairings after recovering them and this was their second flight.

The launch saw the company put another 46 Starlink satellites into orbit as it marked the 51st time it has launched its own satellites. These satellites will provide coverage to remote areas with higher latitudes such as Alaska, confirmed the company's chief Elon Musk in a tweet following the launch. SpaceX also plans to use newer satellites that are capable of transferring data between themselves courtesy of lasers for these regions, as it looks to avoid the cost and hassle of building ground stations in the remote regions.

You can take a look at the latest Starlink launch here:

The post SpaceX Shares Breathtaking Views Of Rocket Cutting Through The Clouds! by Ramish Zafar appeared first on Wccftech.