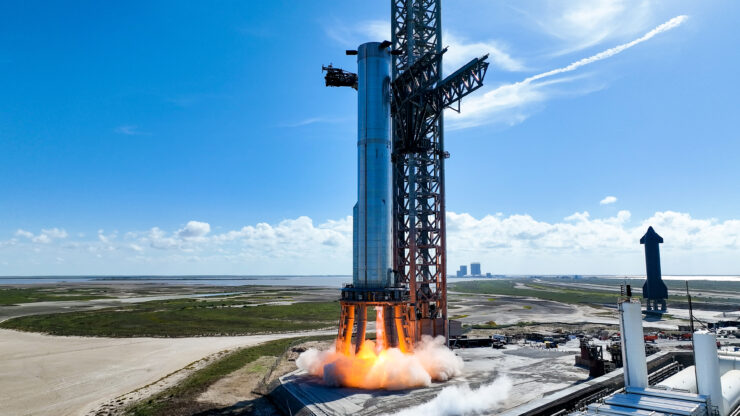 Space Exploration Technologies Corporation's (SpaceX) Starship next-generation launch vehicle has won one of its first launch contracts. SpaceX is developing Starship in its facilities in Boca Chica, Texas, and once the rocket becomes operational it will completely replace the company's existing Falcon 9 lineup. The contract was awarded by a Japanese company that made the announcement earlier today, and it is for a satellite that will be placed into a geosynchronous transfer orbit in 2024. Once it becomes operational, Starship will be one of the largest rockets in the world, and it will be SpaceX's first super heavy-lift class vehicle that eventually aims to develop a sustained human presence on Mars.

Right now SpaceX is testing Starship prototypes in Texas, as it aims to conduct a crucial orbital test flight later this year. The rocket's Booster 7 and an upper-stage spacecraft are expected to make the flight, and SpaceX is currently installing more engines on the booster in preparation for a major static fire attempt.

Throughout the course of this year, the booster has seen several hiccups, with accidents involving its fuel pipe and engines requiring SpaceX to ship it between its launch and testing facilities to its disassembling facilities multiple times.  Each time the company has rapidly repaired its 230 feet tall rocket and the latest bit of fireworks came earlier this month when one of Booster 7's 33 engines underwent a successful static fire test.

The brief statement from SKY Perfect JSAT released earlier today announced that the company has selected Starship to launch its Superbird-9 communications satellite. This satellite will be launched in 2024, and it will primarily serve users in Japan and East Asia. SpaceX will launch the satellite to what is referred to as a geosynchronous transfer orbit.

This orbit is generally the intermediary destination for satellites that are intended to be placed in a geosynchronous orbit. Once the spacecraft reaches a geosynchronous orbit (at roughly 36,000 kilometers), it is able to match the Earth's rotation on its axis, and for the observer on the ground, it returns to its position after a day. The orbit is suited particularly to communications satellites since it nearly eliminates the need for ground station tracking. It is also higher than other orbits, such as low Earth orbits (LEOs), which allows the satellites to cover a larger area on Earth. On the flip side, placing a satellite into geosynchronous orbit requires a hefty amount of launch power and larger satellites as well.

SKY Perfect JSAT did not share any other details about its contract with SpaceX, such as the total amount it will pay the company or the weight of its satellite. Due to the massive costs associated with developing Starship, SpaceX is aiming at an unprecedented launch cadence for the rocket. Starship is also designed to be the world's first fully reusable rocket, with not only its booster but also the upper-stage spacecraft being capable of propulsive vertical landing.

While it is capable of reusing the Falcon 9 rocket's first stage, SpaceX has struggled to replicate this with the rocket's second stage, which requires the company to build a new stage for each mission that it launches. Due to this, the second stage also represents the bulk of the launch costs of a Falcon 9 mission.

SKY Perfect JSAT owns 19 satellites and the Superbird-9 will replace the company's Superbird-C2 satellite which is also in geosynchronous orbit. The newer satellite is manufactured by Airbus and it is fully flexible, which allows operators to reprogram its data transmission and capacity even after it has reached orbit. Beamforming technologies also allow the spacecraft to target a larger geographical area and change its targeted coverage locations.