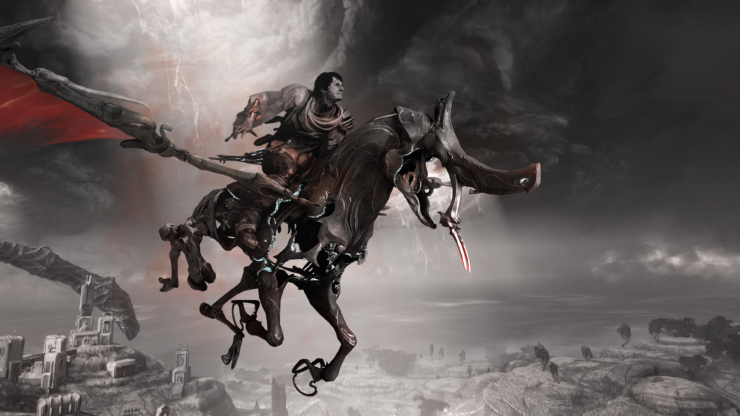 Warframe developer Digital Extremes hosted their TennoCon 2022 live stream today on their Twitch channel. Today’s primary focus is detailing newer content coming down the line for the players that consistently play it, and today’s got a ton of new content shown off. Let’s break down the most critical information, starting off with The Duviri Paradox.

The Duviri Paradox is set to release this Winter and comes with a new open-world locale, known as Duviri. Players can control The Drifter, a returning character from last year’s The New War quest, and gain access to a Kaithe, a new horse-like mount available to players within the quest.

The Duviri Paradox’s opening mission tasks players with taking control of The Drifter and escaping your execution, and subsequently, escape Duviri. The expansion also has rogue-like elements, where, in a daily session, you can pick one of three Decrees that grant you various buffs during your stay in Duviri.

Going forward, the Warframe Art Panel also revealed a future Warframe, designed in collaboration with Joe Madureira (more commonly known as Joe Mad), who’s known for his work on comics like Uncanny X-Men and his self-owned comic Battle Chasers. This Warframe has a werewolf-like motif and will not be the next Warframe. It will be coming to the game for sure, though.

Crossplay is also another hot-button topic for Warframe, and players will be able to see it happen as community testing will be opening soon. That said, when these crossplay stress tests are done, cross-save is projected to follow, and then finally, mobile versions could follow as well.

Moving on, Nightwave, the game’s battle pass-esque system, will update Nora’s Mix Vol.2. Players can unlock some new cosmetics for their Operator, which you can see above. Nightwave is a program that allows you to complete challenges to unlock tiers, which give you valuable items like Umbra Formas, Orokin Catalysts, Orokin Reactors, powerful Mods, and more.

An addendum to the Veilbreaker trailer is that Styanax, the game’s 50th unique Warframe, was teased here, and Digital Extremes is set to release a short film about him closer to Veilbreaker’s release date.

To close out TennoCon 2022, Digital Extremes announced that the team would also work on a brand-new game called Soulframe. It's less of a sequel and more of a sister project to Warframe. It will still have Warframe's focus on cooperative player-vs-environment combat and procedurally generated environments, but it will be “the mirror universe version of Warframe.’

Soulframe's development is overseen by former Warframe Director Steve Sinclair. As he shifts over the new game, the longtime face of the development team, Rebb Ford, is taking control of the science fiction epic as its new creative director. She’s already been in that role for some time. Soulframe received a five-minute reveal trailer, which you can watch below.

Warframe is available to download now on PlayStation 5, PlayStation 4, Xbox Series, Xbox One, Nintendo Switch, and PC via Steam, the Epic Games Store, and its own download client.

iPhone 14 Plus Display Shipments Have Reached Nearly Zero, But iPhone 15 Plus Still A Part Of This Year’s Lineup